Counting on people to count birds

My first experience with “citizen science” came at an early age, in my early teens, when I began to participate in monthly wader (shorebird) and wildfowl counts at my local “patch,” Farlington Marshes in Langstone Harbour (a site of international importance for waders and waterfowl on the south coast of the UK). It was here in the early 1950s that a group of volunteers (my father included) helped pioneer one of the first citizen science bird monitoring systems in the country. Today, about 3,300 volunteers help track population changes and in the UK’s wader and waterfowl populations through monthly monitoring at over 2,800 sites—a significant evolution in both the scale and the number-crunching power, but still dependent on the same approach of birdwatchers volunteering their time to count birds.

Fast-forward 35 years and my day job—helping local partners to manage “their” sites for shorebirds—is dependent on data gathered by volunteers. Without shorebird count data from Western Hemisphere Shorebird Reserve Network (WHSRN) sites and beyond, we wouldn’t be able to estimate population sizes and track trends; we wouldn’t be able to identify whether a site is of particular importance or not; and we’d struggle to monitor and measure the effectiveness of our conservation actions. Granted, some data can be gathered by “professionals.” But delivering effective conservation for a group of birds that moves across the entire hemisphere requires data collection on a scale which is only conceivable through mobilizing an “army” of volunteers.

Underpinning the identification of many WHSRN sites are data from the International Shorebird Survey (ISS). But in recent years the WHSRN Executive Office has increasingly used volunteer shorebird surveyors to help answer questions that are outside the scope of the migration monitoring focus of ISS. As an example, Central America has long been overlooked as an area potentially important for wintering and breeding shorebirds. To help address this, for the past four years the WHSRN Executive Office has been supporting the Central American Waterbird Census. Through this initiative, over 150 volunteers count shorebirds and waterbirds at about 200 sites in the seven countries of Central America plus southern Mexico. The results to date have included the identification of 12 sites of international importance for shorebird conservation.

The region-wide Central American census has been complemented by more targeted surveys, such as simultaneous surveys of shorebirds in the Gulf of Fonseca, mobilizing teams of volunteers to survey about 70 locations in the three countries (El Salvador, Honduras, and Nicaragua). These surveys have revealed the Gulf of Fonseca to be of international importance for populations of at least seven shorebird species, including counts of more than 30% of the Pacific coast population of Wilson’s Plover (Charadrius wilsonia). Of particular note have been sightings of 16 banded American Oystercatcher (Haematopus palliatus) from the east coast of the US—the first evidence that part of this population regularly migrates outside of the United States.

Recently, the Executive Office has used volunteers to tackle even more ambitious challenges, such as estimating the populations of shorebirds using the 11,000 km of coastline from northern Peru around Cape Horn to southern Brazil. In January 2019, 532 volunteers counted shorebirds at a total of 300 sites, covering nearly 1,000 sample plots and recording 128,462 shorebirds of 47 species. The resulting data are currently being analyzed to generate population estimates and to identify previously unknown key sites for shorebirds.

Volunteers have also been key to two recent survey efforts: A census of shorebirds in the primarily saline lakes of the Altiplano, and a survey of the winter population of Wilson’s Phalarope (Phalaropus tricolor). The Altiplano is a high elevation plateau at the widest part of the Andes, with an average elevation of 3,750 m (12,300 feet). It’s believed to be a key wintering area for North American-breeding shorebirds, in addition to a key breeding area for many shorebirds restricted to South America. But how to discover whether that is the case? The answer: Mobilizing 20 teams of volunteers to conduct a near-simultaneous survey of over 250 lagoons. During early February 2020, the 85 hardy participants recorded a total of 250,367 shorebirds of 29 species. To complement the Altiplano census, February 2020 also saw a simultaneous survey being undertaken in the lowland lagoons of Argentina, with 108 volunteers visiting a total of 449 sites in 17 provinces, recording 456,271 shorebirds of 28 species. The results from these two censuses are still being analyzed, but together they will provide the first-ever estimate of the winter population of Wilson’s Phalarope, in addition to identifying new priority sites for conservation action to safeguard this and other shorebird species. 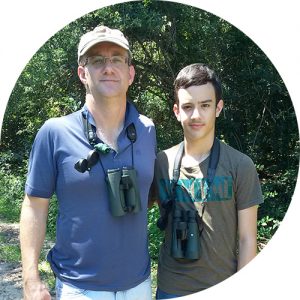 While the short-term gains of volunteer-led survey efforts are clear—the identification of key sites and estimates of populations—their greatest value are the “legacy benefits,” the long-term data sets that enable trends to be tracked over generations, of both birds and humans! My first foray into citizen science added to a data set that was already close to 40 years old. My youngest son is now taking his first steps as a citizen scientist, participating in shorebird surveys in the Bahía de Asunción WHSRN site. While we currently only have 20 years of shorebird data from that site, here’s hoping that he and future generations will still be counting shorebirds there in 50-100 years’ time (and with luck, me too!).

Feathers in the Flint Hills: Shorebirds in the Grasslands

Try your hand at citizen science!

Check out our family-friendly activities!