Stormy views off the bluff during seawatch. 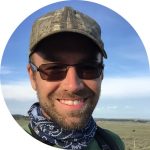 A Nor’easter stationed southeast of Cape Cod continued to deliver rain and strong north winds to Manomet on Monday. By Tuesday morning when I arrived, the wind had lessened somewhat and shifted to the northwest, with temperatures around 40 and occasional bands of drizzle. Unsurprisingly, the net lanes and farm were pretty quiet bird-wise. Still, there were a few signs of spring. I watched as a pair of Pine Warblers were tailed by a female Brown-headed Cowbird, and a House Wren gave its ebullient chatter from along the farm’s stone wall. The highlight of the day came during the seawatch, as the roiling sea was filled with birds. Laughing Gulls and Northern Gannets were flying into the wind, while a large raft of merganser (173!), scoter, and eider rode the giant waves. And, typical of late April, I spotted good numbers of staging Common Loon and both grebe species.

Group of Double-crested Cormorants off the bluff.

Birding along the net lanes. 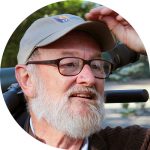 Another (almost record-setting) cold week with wind and rain, but at least no rain on Wednesday.  In fact, the spell was broken at the weekend after April was in the history books.  Migrants continued to trickle in (see our census results this week).  Banding was still dominated by a few wintering White-throated Sparrows and 6 new migrant whitethroats to band, all with plenty of subcutaneous fat for the last leg of their journey north.  One weighed 36.9 grams which sets off a warning on the banding computer whenever a bird is more than 3 standard deviations from the long-term species average weight at Manomet.  This bird was 2 grams+ over the limit, presumably handy if the next night’s flight ended in the still snowclad forests of northern Maine or Canada.

A new species banded for the season was a female Mourning Dove.  As we have pointed out before, males have longer and more pointed tails, with a pinker flush on the breast and blueish crowns.  This female is a little duller and shorter-tailed, but check the subtle pale blue and pale green eye-rings as she peers out between the bander’s bright blue gloved fingers!  There is nothing subtle about a male cardinal, he is quite capable of destroying rubber gloves with that beak, and making a significant impression on the finger inside if not held correctly.

Trevor’s sightings around the property: https://ebird.org/checklist/S68143425 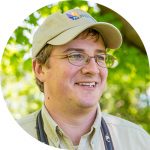 Wednesday Morning was a little bit warmer than my last few surveys. That being said, it was still rather chilly to start (and no frogs in the frog tubes!) and the first major wave of neotropical migrants was waiting in the wings just a little bit further south. At least one large flock of White-throated Sparrows continued to skulk in the underbrush and I was surprised to see a Palm Warbler of the western subspecies hanging out with them. Western Palm Warblers are uncommon to rare along the coast during spring migration. It left me wondering if the winds had been from the west over the last few days.

Of course, nothing could prepare me for a discovery I made a few minutes later when I tracked down a bird that was giving a dry ‘chip’ note from a low thicket. The bird’s bright yellow coloration made me think I might have a Common Yellowthroat with a frog in its throat, but when I put my binoculars on it, I was floored to see a bright male MacGillivray’s Warbler (pictured above, right) staring back at me in all of its splendor! This species is a very rare, but regular vagrant to the east coast from western North America in the fall. Although they have been recorded in the fall a few dozen times in the state, this record is one of the only spring records for the species on the entire east coast. Of course, I had left my camera at home, but I was able to capture recordings of the bird’s chipping and the bird singing! Manomet staffers Lisa Schibley, Alan, and Trevor were able to find the bird a little later and confirm the ID. Another great bird for Manomet! Off the bluff, loon numbers (including red-throated) continued to swell in anticipation of good tailwinds.