Lindsay the Whimbrel is on the move again! Lindsay is one of six Whimbrels tagged earlier this summer in the Katakturuk River Valley in the Arctic National Wildlife Refuge. These tags allow us to study local movement patterns and long-distance migration pathways and stopover sites.

After making the 3-day crossing from Alaska to California, Lindsay stopped in San Francisco Bay for a week to rest and refuel. Then, on the evening of August 2nd, she took off heading south again along the coast. She stopped briefly in San Diego harbor after flying for about 12 hours, then headed out again on the evening of August 3rd, crossing into Mexico and arriving a few hours later on the expansive mudflats of the Delta del Rio Colorado at the head of the Golfo de California. This area is another very important site for shorebirds and is a Western Hemisphere Shorebird Reserve Network site of hemispheric importance, as well as a Ramsar site and recognized by Mexico as a priority wetland for shorebirds. 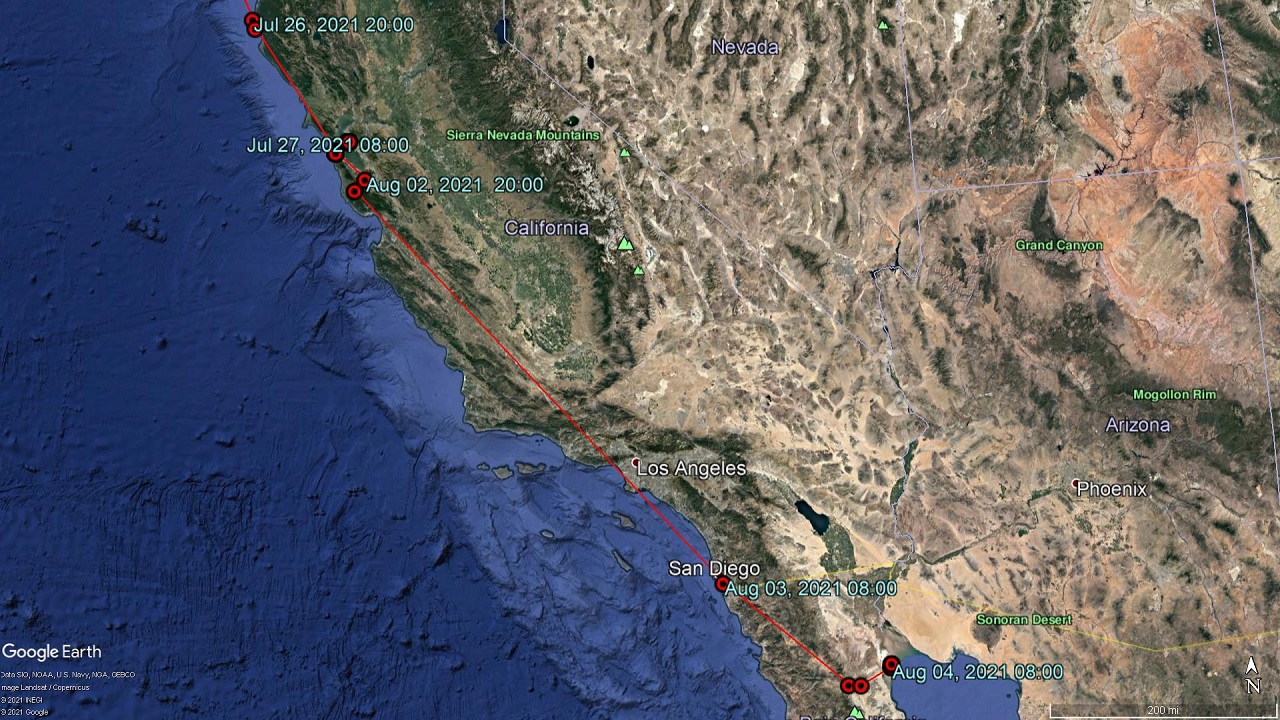 While Lindsay refuels in the Gulf of California, let’s check in with her mate and the Whimbrels we tagged over the summer. For more on the work this summer and background on the project check out this recent article.

Lindsay (EY2) and Katakturuk (EY5): This pair spent about ten days together in the foothills of the Brooks Range after losing their nest, likely to Parasitic Jaeger predation. They departed on migration within 12 hours of each other but going in opposite directions. Lindsay went west to the Yukon-Kuskokwim Delta and then on down the West Coast. Katakturuk took off East along the Arctic Coast of Canada before angling southeast towards Hudson Bay. He stopped for a few days near Chesterfield Inlet, before heading to the South end of Hudson Bay. He has been at this site since July 18. He is likely fueling up before his own long migration flight to South America.

Salix (EY3) and Sadlerochit (EY1): Salix (female) comes from the Latin name for Willow, which is the dominant type of woody plant in the area. Sadlerochit (male) is named after the mountain range South of the valley. This pair nested just a few hundred meters from Lindsay and Katakturuk. Their chicks likely hatched in early July. Several days after the chicks hatched, Salix left the area to prepare for her migration. While both adults will sometimes raise the chicks for 4-6 weeks, frequently, the female leaves early while the male takes on responsibility for watching the chicks until they can fly. Salix followed Lindsay’s route West across the Arctic coastal plain and down to the Yukon-Kuskokwim Delta. On August 4th, she moved down to the Alaska Peninsula and is likely about to make the crossing to California or another site on the West coast. Sadlerochit is still on territory in the Arctic National Wildlife Refuge with his fledgling chicks.

Dryas (EY4) and Lupine (AUL): Dryas (female) is named after a tiny white flower that covers the drier uplands in the Arctic. Lupine (male) is also named after a flower found in abundance in the Katakturuk River Valley, especially in areas where the Whimbrels feed. This pair also apparently had a successful nest. Both parents remained on site for a couple of weeks after the nest hatched, before Dryas also left for the staging area at the Yukon-Kuskokwim Delta. Lupine is still on territory near Sadlerochit. Both will probably leave on migration within the next week or two. The chicks will depart a couple of weeks after that and will have to find their own way south to the wintering grounds.

The other two female Whimbrel both followed Lindsay’s route, going west across the Arctic coastal plain and then down to the Yukon-Kuskokwim delta.

Don’t miss any updates on our Whimbrel Tracking work! Sign up now!