I have been lying flat in the sedge, hiding behind a tundra mound for the last 20 minutes. A cloud of frustrated mosquitos is whining all around but unable to reach me through my bug shirt and headnet. One hundred and fifty meters away, a male Whimbrel is slowly making his way back toward his nest, head up and on high alert. It is the morning of June 23, and it’s our last morning in the Katakturuk River valley in Alaska’s Arctic National Wildlife Refuge. Our trip has already been a huge success, with five Whimbrels tagged with GPS transmitters in the last three days. But, we have one last transmitter to put out, and we really want to catch this bird. Two hundred meters along the slope, I can barely see the tan camouflage of Kirsti Carr’s bug jacket as she also lies flat in the sedge, watching from another angle and ready to radio the moment the Whimbrel gets back on the nest. 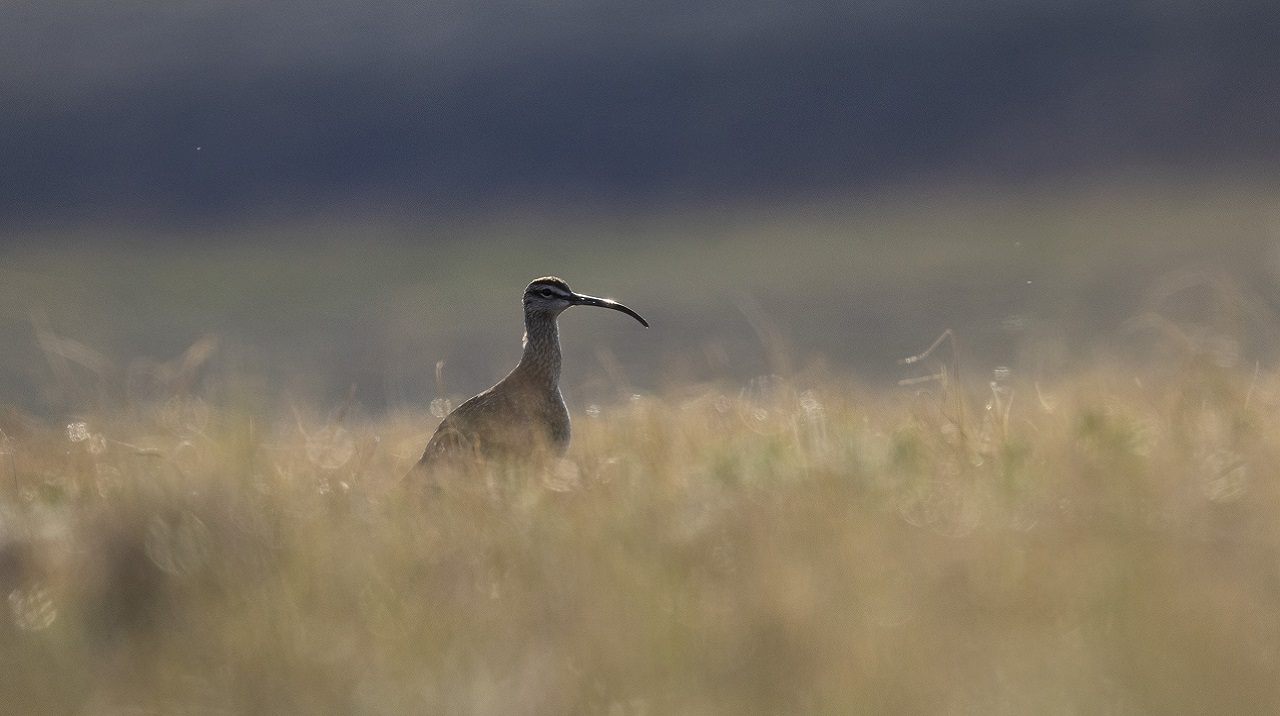 A Whimbrel watches us as we search for her nest in the tall tundra sedge.

Kirsti and I arrived in the Katakturuk Valley on June 20 to find any Whimbrel nests in the area and hoping to catch up to six adults for tagging. Kirsti is a volunteer for the U.S. Fish and Wildlife Service (USFWS) and working with me to catch and tag sandpipers because of her previous experience GPS tagging Red-headed Woodpeckers in Minnesota. The Katakturuk is about 35km to the Southeast of the USFWS Canning River Delta Camp, which is only about 25 minutes away by helicopter. Eric Lane, our pilot from Pollux Aviation, dropped us off and even helped set up our spike camp before heading out. 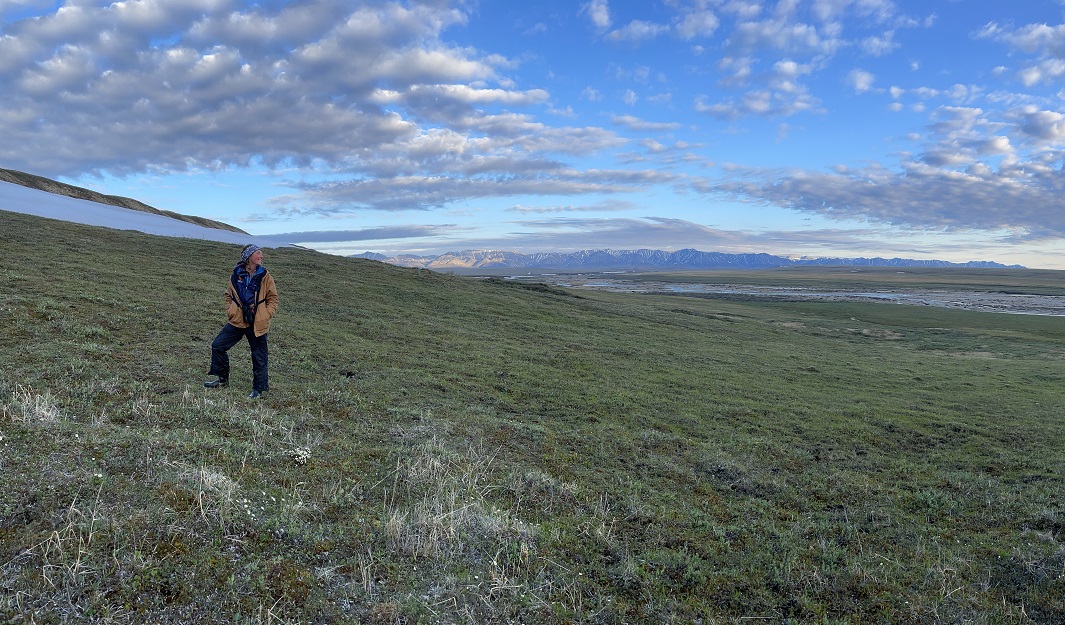 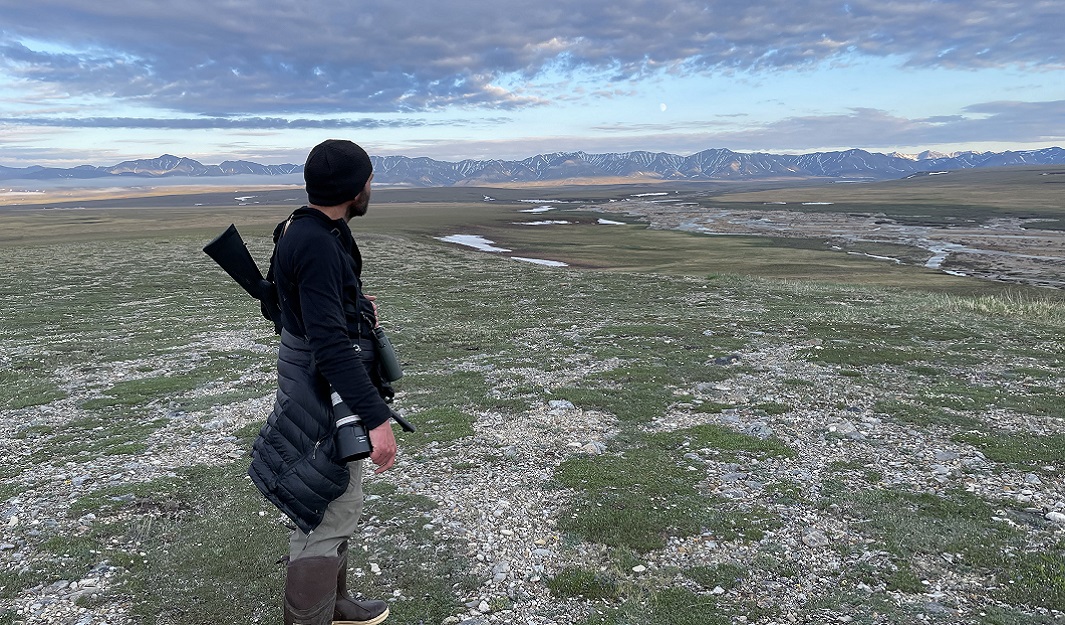 The Katakturuk River valley is a patchwork of dry tundra covered in Dryas flowers and lichen and hummock wetlands dominated by a mix of sedge species. After a couple of weeks of daily walking on the wet, uneven ground of the Canning River Delta, the good footing and stunning landscape were a welcome change. The last time I was here was in June 2019. Manomet and the USFWS had a small joint camp in the Katakturuk Valley that year. We conducted Program for Regional and International Shorebird Monitoring surveys (PRISM) for breeding shorebirds; estimated shorebird nest survival across the Arctic coastal plain; and deployed tags on Pectoral Sandpipers and American Golden-Plovers to assess their use of the coastal plain and migration pathways and strategies. 2020 was supposed to be the second year of all of these projects, but like so many other things, COVID shut those plans down at least temporarily. We had hoped to resume fieldwork in 2021, but we again had to postpone most of the work with the uncertainty around COVID rules and vaccine availability. Fortunately, I was able to get vaccinated in time to join the USFWS team going to the Canning River Delta camp in June. My goal was to deploy transmitters on Pectoral Sandpipers, American Golden-Plovers, and Whimbrel, and assist the USFWS team with their work at the Canning River camp.

A Whimbrel fitted with a GPS tag that will allow us to track its migration and habitat use over several years.

Our campsite in the Katakturuk River Valley in the Arctic National Wildlife Refuge.

Back in 2019, the Katakturuk Valley held several surprises for us. We discovered a high density of nesting Whimbrel in the area, which led to questions about the importance of the Refuge coastal plain for this species. We were curious to learn if these birds were part of the Mackenzie Delta group that migrates east and crosses the Atlantic to South America, or if they were associated with the rest of the Whimbrel in Alaska, which migrates down the west coast. In 2019, we tagged one bird with a GPS transmitter and discovered that he went the Eastern route and ended up in Brazil by way of the Hudson Bay flats and an impressive multi-day flight over the Atlantic Ocean. This year, we hoped to expand the project with six new GPS tags that would track the Whimbrels over multiple years.

Watching through my binoculars over the top of the mound, I see the Whimbrel dip out of sight very close to the nest and not reappear. After a couple of moments, I radio to Kirsti:

“Can you still see him?”

“No, he just dropped out of sight, but I think he is on the nest.” 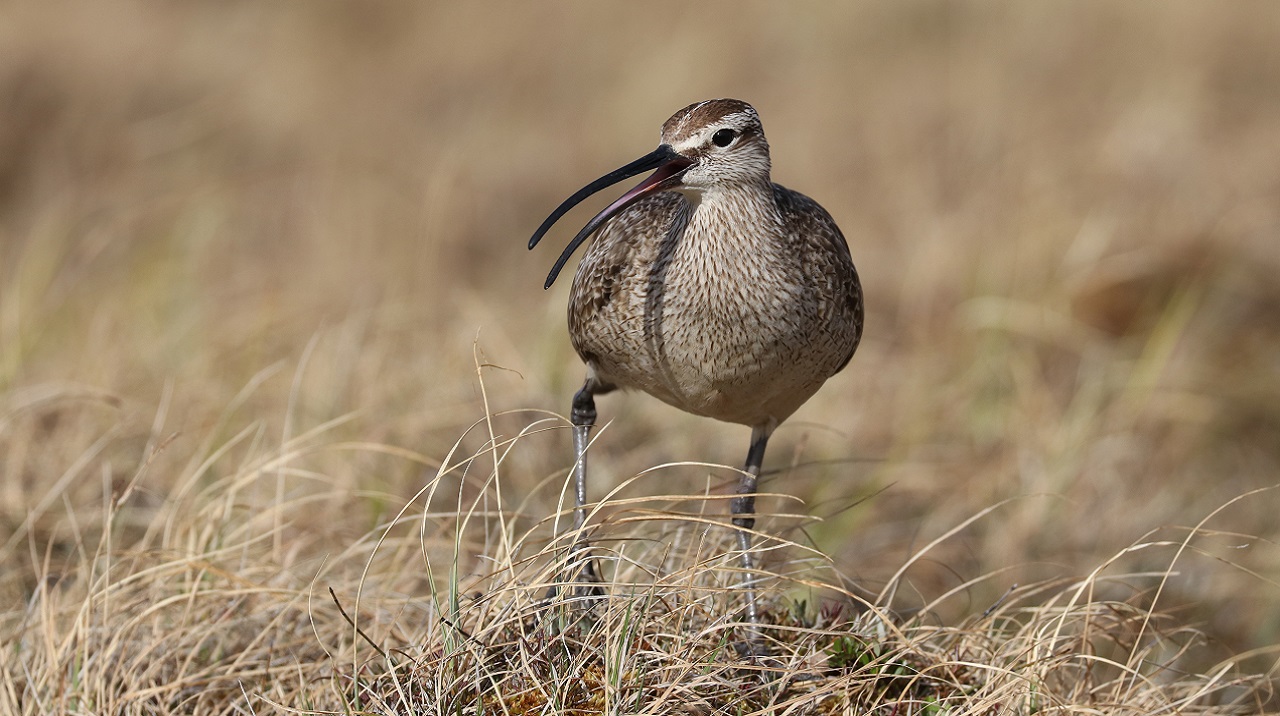 This Whimbrel had opinions about our presence in her territory. Whimbrels are highly defensive of their nests and territories and will harass predators and battle with their neighbors.

I wait several more moments before seeing a slight movement through the sedge as the bird turns his head. He is definitely on the nest now. Holding my breath, I give a hard pull on the trigger line and then immediately start sprinting toward the nest. The traps are very reliable, but there is a chance the bird can escape given enough time. Whimbrel are so wary that we have to hide quite a distance from the nest. Speed is of the essence. Hurdling mounds and avoiding mud pits, I somehow make it to the trap without falling on my face. Bird in the trap!

Moments later we add a USGS metal band with a unique code and then complete a series of measurements to confirm sex and assess molt and body condition. Next, we add a field readable leg flag (EY5) and a solar-powered GPS transmitter that should last several years and allow us to track this bird through his incredible annual journey.

After a final check, EY5 is ready for release. He launches into the air with a hard beat of his wings, rising up and out towards the river, giving a loud alarm call. His mate has been standing nearby and leaps up to follow. We quickly gather our supplies and move out of the area so they can return to their nest as quickly as possible. Elated with the morning’s work, we head back to camp to finish packing and wait for the helicopter to pick us up. In three and a half days, we found three nesting Whimbrel pairs and one pair of American Golden-Plovers and managed to catch all eight birds and fit them with GPS tags. When we return to the Canning Camp, we will complete the tagging work for the season with 13 tags on female Pectoral Sandpipers. We will track all these birds through the fall and winter, and these Whimbrel tags should keep providing valuable data for several years.

A post shared by U.S. Fish and Wildlife Service (@usfws)

Don’t miss any updates on our Whimbrel Tracking work! Sign up now!

Read More From Our July 2021 Newsletter

How Is Climate Change Impacting Food Availability For Shorebirds?

Four New Sites And One New Country Added To WHSRN