Kansas: The Heart of the Central Flyway

But at the heart of the Central Flyway, Kansas is a linchpin of migration, acting as a key stopover on both the north- and south-bound routes. When conditions are favorable, it can be a migratory bird paradise, with tens of thousands of shorebirds stopping to rest and feed across the state from the Playa Lakes in the west to the large wetland complexes in the center to the tall grass prairie in the east. But the shorebirds face a complex landscape. Migrants passing through the interior of the U.S. are affected by unpredictable weather patterns, ephemeral wetlands conditions, and less dependable food supplies. Add in threats such as invasive plants, fragmentation, energy development, and urban growth, and the need for careful monitoring becomes obvious.

The midcontinent hosts impressive population slices of about a dozen shorebird species. GPS tracks seem to show nearly the entire population of Hudsonian Godwits passing through Kansas during spring migration. Significant portions of Baird’s Sandpipers and Long-billed Dowitcher populations visit places like Cheyenne Bottoms and Quivira NWR, both WHSRN sites. And 50%of all Buff-breasted Sandpipers are hosted by the Flint Hills in the east, a tall grass prairie landscape that is part of Manomet’s Coalitions for Shorebird Conservation.

Unfortunately, the lack of shorebird surveys currently being conducted in the state means a missed opportunity. At this point in time, we only have three sites conducting International Shorebird Surveys (ISS) regularly: Cheyenne Bottoms, Quivira National Wildlife Refuge, and Neosho Wildlife Area. Yet, there are dozens of sites in Kansas that have been identified as potentially important to shorebirds. Because of the importance of Kansas to shorebirds, we are trying to increase the number of sites that are part of the ISS. This vital data is necessary to develop population trends, target conservation efforts, identify potential Western Hemisphere Reserve Network (WHSRN) sites, and tell shorebird stories. Moreover, ISS in Kansas will be of major importance in the development of the Midcontinent Shorebird Conservation Initiative. With targeted recruitment and enthusiastic contributors, we have reason to be optimistic.

I recently compiled the data collected over 20 years of ISS surveys of Cheyenne Bottoms’ shorebirds. I decided to put together this document for a few reasons. First, it serves as a report of the findings of the ISS. Second, it is my hope that readers will find it useful when trying to decide the best time to visit Cheyenne Bottoms in search of certain species of shorebirds. Finally, it is simply a way for me to express my interest in shorebirds and my concern for their future.

I hope that you enjoy this report and learning more about the shorebirds visiting Cheyenne Bottoms; we hope that we’ll be able to welcome you soon! 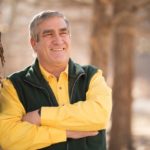 Robert Penner has been conducting ISS surveys for about 27 years in different capacities. Penner has his doctorate in ornithology, and shorebirds are his expertise. He’s been working at Cheyenne Bottoms since 1996, but in recent years he has represented The Nature Conservancy to work on issues at an international scale.