Whimbrel (Numenius phaeopus) have been identified as a conservation priority in the Atlantic Flyway, with a population that has declined by 50% between the early 1990s and the mid-2000s at key Atlantic staging areas. Manomet, along with the Center for Conservation Biology at William & Mary and many other partners are working together to gather all the information we need to apply conservation action to Whimbrel populations. In April 2021, Manomet’s Brad Winn and I headed to the Gulf coast to expand our recent work in the Atlantic flyway into the Midcontinent Flyway. Our goal for this trip? To delineate key staging areas for Whimbrel in Louisiana and Texas and build relationships with the key conservation players.

Why are we so focused on the spring staging areas for Whimbrel? In the conservation field, monitoring population size and trend is essential to understanding the cause-effect links between management actions and population response. Therefore, one of the first questions we need to ask as we build a conservation strategy is: How many Whimbrel are there, and how do we count them? This, in itself, is quite the challenge. For ¾ of the year, Whimbrel are largely inaccessible. During the breeding season, they are thinly dispersed throughout the vast Arctic and sub-Arctic tundra. During fall migration, a large percentage fly straight out over the Atlantic Ocean, without ever passing through the lower 48 states. During the winter months, they are dispersed along the coasts of the Caribbean and northern South America, a coastline which is remote and difficult to survey. Therefore, the only time to do population-level headcounts of Whimbrel is at spring staging areas, and particularly at their nocturnal roost sites. There may just be a few of these roosts in a region, pooling birds from up to 50 miles away and numbering thousands of birds.

Manomet and our partners have been identifying these sites developing survey strategies in the Atlantic Flyway for the past several years, and we have built a monitoring network for roost sites along the Atlantic coast, including focal areas such as Virginia, South Carolina, and Georgia. Our goal in 2021 is to expand this monitoring network into the Gulf coast.

Over the last 10 years, Manomet and our team of partners have deployed over 40 transmitters on Whimbrel at various sites in North America. This mountain of data has vastly improved our understanding of Whimbrel migratory pathways, resource use, and survival. For our trip to the Gulf coast, the information relayed from these transmitters combined with publicly available ebird data helped us hone in on key sites to explore. For example, we analyzed the daily commutes of a satellite tagged bird in Louisiana, as it traveled from a coastal roost site inland to rice and crawfish fields to feed during the day. Those feeding areas happened to coincide with the largest concentrations of Whimbrel reported in ebird over the past decade, some of which numbered over 500 individuals. This allowed us to hypothesize that the coastal roost site identified by the satellite data could be functioning as a nocturnal roost for all those birds.

To test this hypothesis, we coordinated with refuge staff to do an evening survey in Rockefeller Wildlife Refuge, the location of the potential roost site. While we knew at least one bird (the satellite-tagged bird) was roosting there, we entered the night of 4/19 not knowing if any other birds would show up. We climbed onto an excavator to gain some elevation and started scanning the horizon for Whimbrels. What started out as a trickle soon turned into a flood, and by the end of the survey, we had tallied over 3,000 Whimbrels arriving onto the refuge. A great discovery! This count alone puts south-central Louisiana on the map as one of the top spring staging areas for Whimbrel on the Atlantic and Gulf Coasts. We did subsequent surveys the following two nights and were joined by State Ornithologist for LDWF, Robert Dobbs. We were thrilled to share our methods with Robert, and he and Louisiana Audubon have now joined forces to continue the surveys. 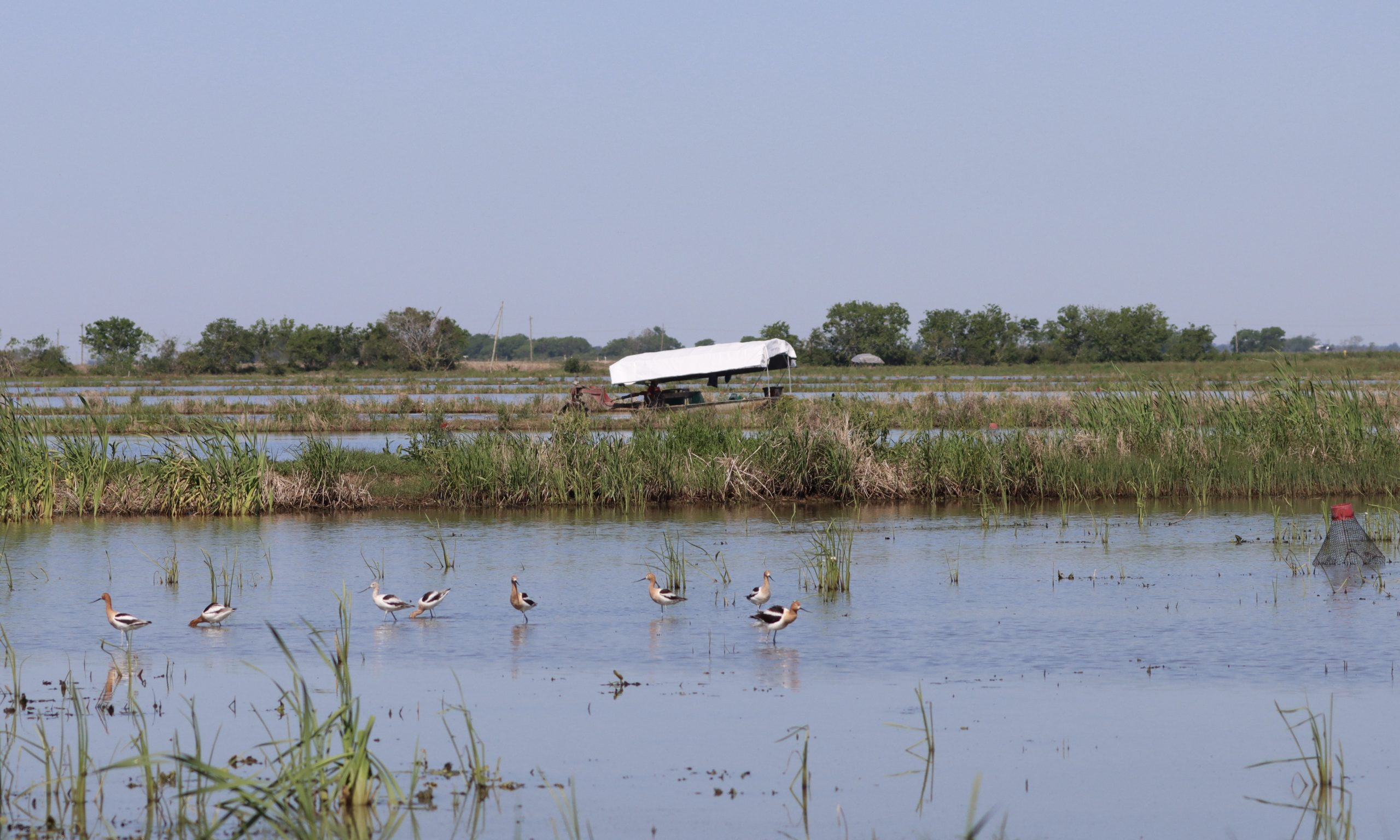 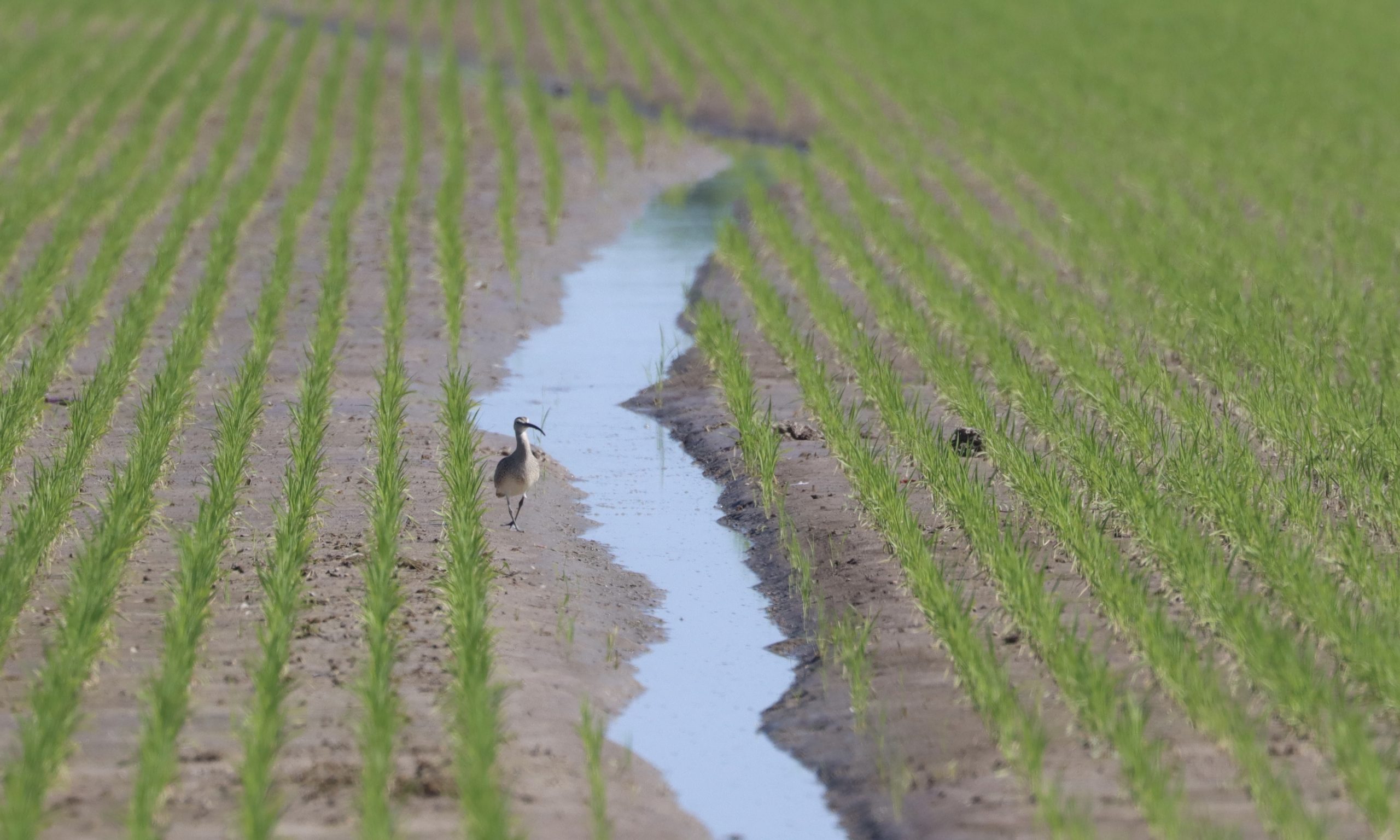 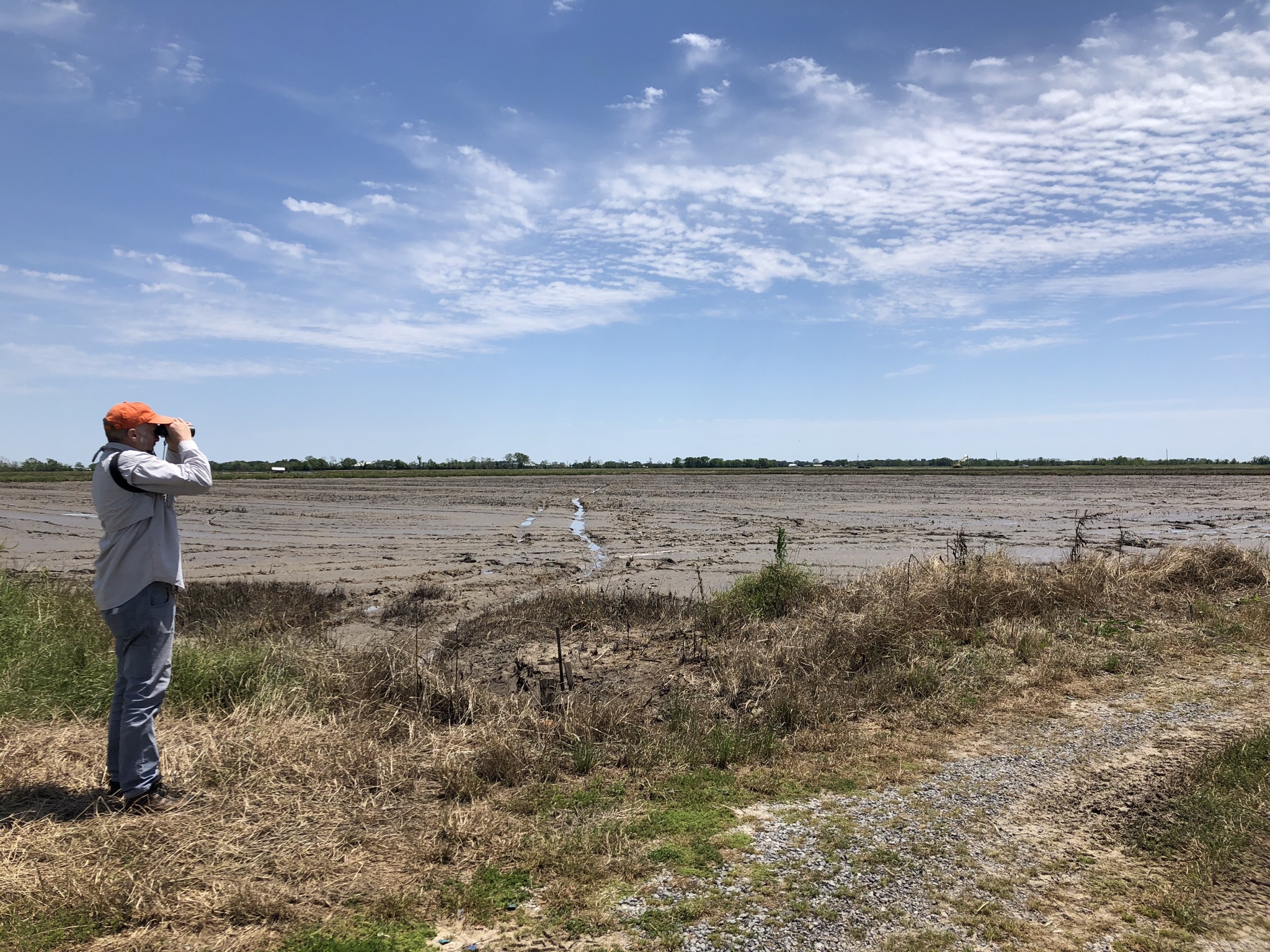 During the day, we covered the working lands north of Rockefeller, which mostly include vast rice and crawfish fields. In addition to the roost surveys, we are keen on increasing our understanding of how Whimbrels are using this landscape and finding the resources they need to successfully continue their migration.

After Louisiana, we headed to east Texas and the area surrounding Anahuac NWR. Similar to Louisiana, a combination of historical surveys, e-bird observations, and our transmitter data had clearly highlighted this area as a major concentration point for Whimbrels. We met up with Joseph Marty, the refuge biologist, and once again plotted our survey strategy. We had also received helpful intel from a team of University of Oklahoma researchers, who had been out scouting the previous week. We did four days of dawn and dusk surveys, and also spent the daytime scouting the terrain to find out what areas the birds were feeding on. Our peak count for the roost on the refuge was over 5,000 birds, making this the second-largest concentration of Whimbrels we know of on the Atlantic and Gulf coasts.

In Texas, we found Whimbrel using a surprising variety of habitats and feeding on a wide array of food items. This covered the spectrum from browsing on dewberries in overgrown pastureland to gorging on ghost shrimp on coastal flats with Willets and Long-billed Curlews.

The best way to survey for Whimbrel is at dawn and dusk when they are commuting from and to their communal roosts, which can be located in coastal impoundments, peninsulas, and islands. They fly in flocks both big and small, with roosts sometimes numbering several thousand individuals. With a total population for the Hudsonian subspecies likely under 60,000 total birds, identification and conservation of these roosts is a major priority.

We met up with USFWS biologists in the area of the mouth of the Brazos River to explore the staging area for Ahanu, a Whimbrel we tagged in Massachusetts in 2018. While we didn’t spot Ahanu, we did see lots of Whimbrels. They were foraging for fiddler crabs and ghost shrimp in the tidal flats and Salicornia, and hopping onto driftwood at the mouth of the river to roost. 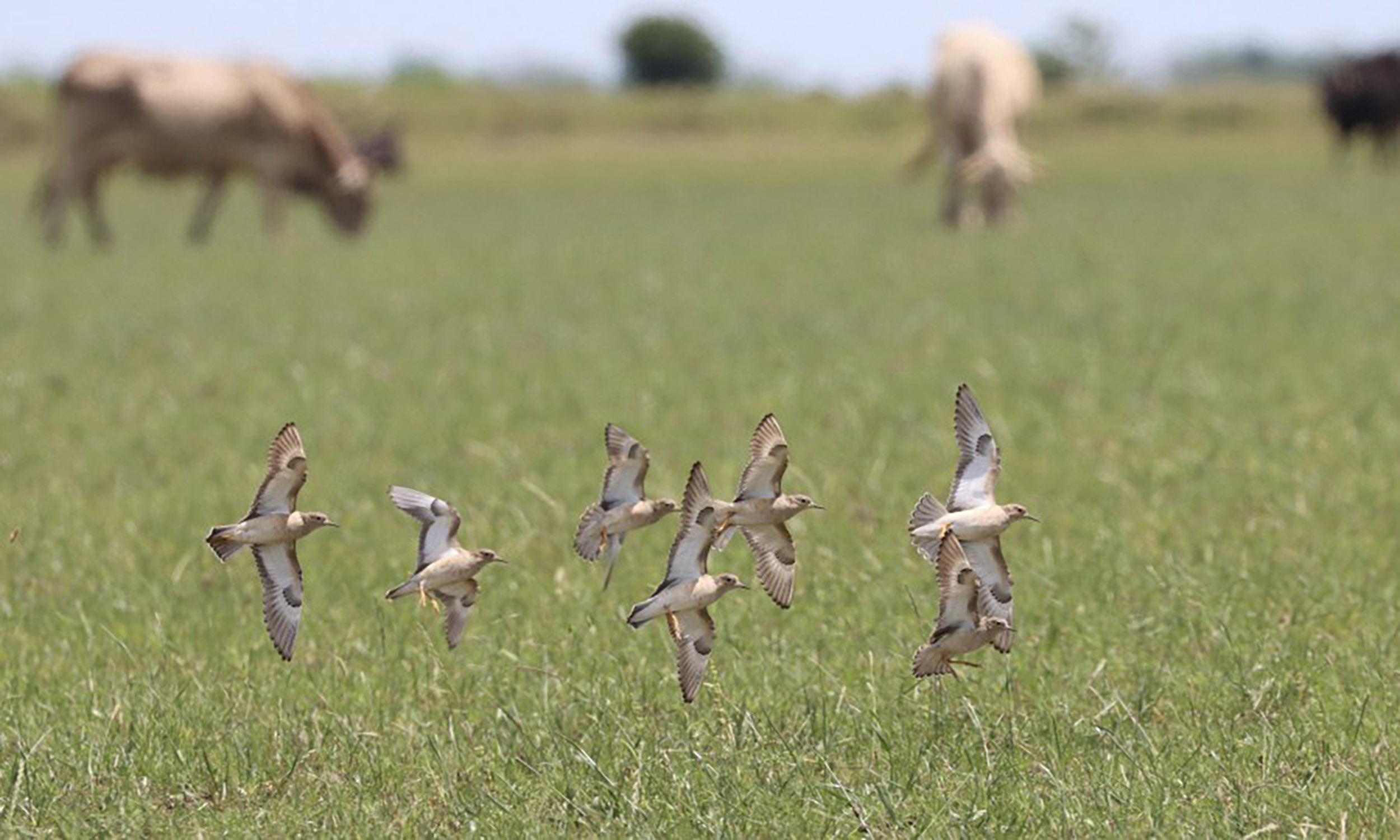 Buff-breasted Sandpipers are another priority shorebird species that relies heavily on the Midcontinent Flyway during spring migration. Concentrations of several hundred can be found in shortgrass habitats, including cattle pastures and turf farms. Manomet is one of several organizations working together to put the pieces together to ensure that we are taking the right steps to ensure their survival.

After just 10 days in the field, we left feeling that we had accomplished a great deal. At the same time, we view this trip as just the first step in developing a conservation strategy for Whimbrels on the Gulf coast. In addition, we as an organization are also focused on the big picture, and we are intent on increasing our role as a leader in applied science and conservation work in the Midcontinent Flyway. We want to focus our work on high priority species such as Whimbrels and Buff-breasted Sandpipers, while also expanding our shorebird monitoring across the Gulf coast. We are also focused on laying the groundwork to identify and build coalitions to nominate new WHSRN sites in Louisiana and Texas.