Manomet has a long history of embracing the role of women and girls in science, starting with our founder Kathleen “Betty” Anderson and continuing with our staff today. 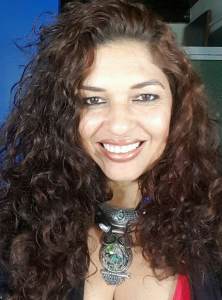 Salvadora Morales, a native of Nicaragua, joined the Manomet team in 2019 as a Shorebird Conservation Specialist with the Western Hemisphere Shorebird Reserve Network (WHSRN) Executive Office. “It was fate” that got Salvadora interested in a career in science. “When I graduated from high school on the Caribbean coast of Nicaragua, there was no university. There was only one option for scholarships in forest engineering or ecology and natural resources. I opted for the study of ecology with the option of being a Wildlife specialist, but then I took ornithology courses and fell in love with birds. Today I look back, and I realize that it was not a coincidence and that it is the place where I should be.”

Salvadora has worked in bird conservation for 18 years. She is a founding member of the organization Quetzalli Nicaragua where – through the support of BirdLife International and US Forest Service, and later the WHSRN Executive Office – she coordinated the first shorebird monitoring efforts in the Gulf of Fonseca. These surveys led to the nomination of the Delta del Estero Real as a WHSRN Site. In her current role, she is responsible for exploring opportunities to coordinate and promote best management practices in shrimp aquaculture and salt production to benefit shorebirds. Working to promote the conservation, protection, and management of habitat for shorebirds in Central America, she helps coordinate the Migratory Shorebird Project in Central America, in addition to the Central American Waterbird Census.

Besides the challenges of long days in the field, working as a woman in science often brings additional challenges to overcome. Salvadora says that “it is not easy. Women must overcome many social constructions in a Latin American culture dominated by patriarchy, corruption, machismo, and violence. Science is an issue that is still under development in our region. Unfortunately, the adoption of science is going much slower than the destruction and degradation of the environment that we study.”

She goes on to explain that “investment in science and conservation has not been a priority for many Latin American governments, making the participation of women in these spaces more difficult. But it is necessary. I firmly believe that decision-making must be based on field science and knowledge management.”

But Salvadora believes that a career in science, wherever you are in the world, is worthwhile to pursue if you “believe in yourself and your abilities. Find what you like and practice it, live it, get involved, commit yourself, and above all, enjoy the journey. A friend once told me that you already have the ‘NO,’ but you have to look for the ‘YES.’ The doors will open along the way.”

On November 3rd, Hurricane Eta hit northeast Nicaragua, decimating homes, knocking out power, and causing massive flooding. The community of Wawa Bar, where Salvadora is from, lost everything. Salvadora led efforts to help the community rebuild, raising over $14,000, which was used to partially build at least 6 houses that were 70% completed. Fourteen other families were provided wood and other supplies for rebuilding. Much is still needed, especially with the uncertainty before a new hurricane season. Salvadora “would like to take this opportunity to thank all those who supported us.  I want to thanks especially all the bird conservation communities that support my family and part of the community where I grew up when I was a child.”

The Beginning Of Our DEI Journey