Four new sites and one new country added to WHSRN

With the addition of the Gulf of Nicoya, Costa Rica became the 18th country joining the network and the third WHSRN site in Central America. Credit: Union of Ornithologists of Costa Rica

When evading a predator, there is safety in numbers. But for shorebirds, there is also danger in numbers. Many shorebird species gather in large numbers at just a few specific sites to rest and refuel during migration. Threats to habitat at any one of these critical staging areas could mean destroying a species’ whole flyway population.

Shorebird populations have been reduced to a fraction of what they once were. To recover these species, it is essential to protect a network of these stopover sites, ensuring that shorebirds have a safe place to rest and feed on their long migrations.

The Western Hemisphere Shorebird Reserve Network (WHSRN), founded in 1986, seeks to address the threats that face shorebirds with a site-based, partnership-driven conservation initiative for protecting critical habitats for shorebirds throughout the Americas.

With the addition of four new sites in May 2021, there are now 111 WHSRN sites in 18 countries. The four new sites are the Gulf of Nicoya, Costa Rica; Yavaros-Moroncárit lagoons, Mexico; Isla Corazón y Fragata Wildlife Refuge, Ecuador; and Canal de Jambelí, Ecuador.

“The core of WHSRN is the partners. Without the partners on the ground working to protect shorebirds and their habitat, the challenges shorebirds face would be unsurmountable” says Rob Clay, Vice President of Flyways. “Adding four new sites to WHSRN magnifies the effort of all shorebird conservation action across the hemisphere.”

With the addition of the Gulf of Nicoya, Costa Rica became the 18th country to join the network and the third WHSRN site in Central America.

The site has been designated a WHSRN Site of Regional Importance because of the presence of more than 1% of the biogeographic populations of the Wilson’s Plover (Charadrius wilsonia), Collared Plover (Ch. collaris), Short-billed Dowitcher (Limnodromus griseus), and Whimbrel (Numenius phaeopus). It is unclear how many shorebirds pass through during migration, but single-day counts of more than 1,000 individuals of several species (including Western Sandpiper (Calidris mauri) and Semipalmated Sandpiper (Calidris pusilla)) make it likely that over 20,000 shorebirds are passing through during migration.

“Recognizing the Gulf of Nicoya as part of the Network is a great step to support conservation actions of the site and highlight its importance to shorebirds,” says Luis Sandoval, the president of the Union of Ornithologists of Costa Rica. Sandoval adds that “it will help promote the economic development of the communities in the Gulf alongside conservation.”

Main threats for the Gulf include water pollution from human settlements and agriculture. Coastal development is also increasing the removal of mangroves, affecting the natural cycles within the Gulf, threatening shorebird habitat and the habitat for Mangrove Hummingbird (Amazilia boucardi), a Costa Rican endemic.

“We are grateful for all the help of the many volunteers participating in the surveys since 2007,” says Sandoval. “Without their commitment, this designation would not have been possible.”

Learn more about the Gulf of Nicoya>> 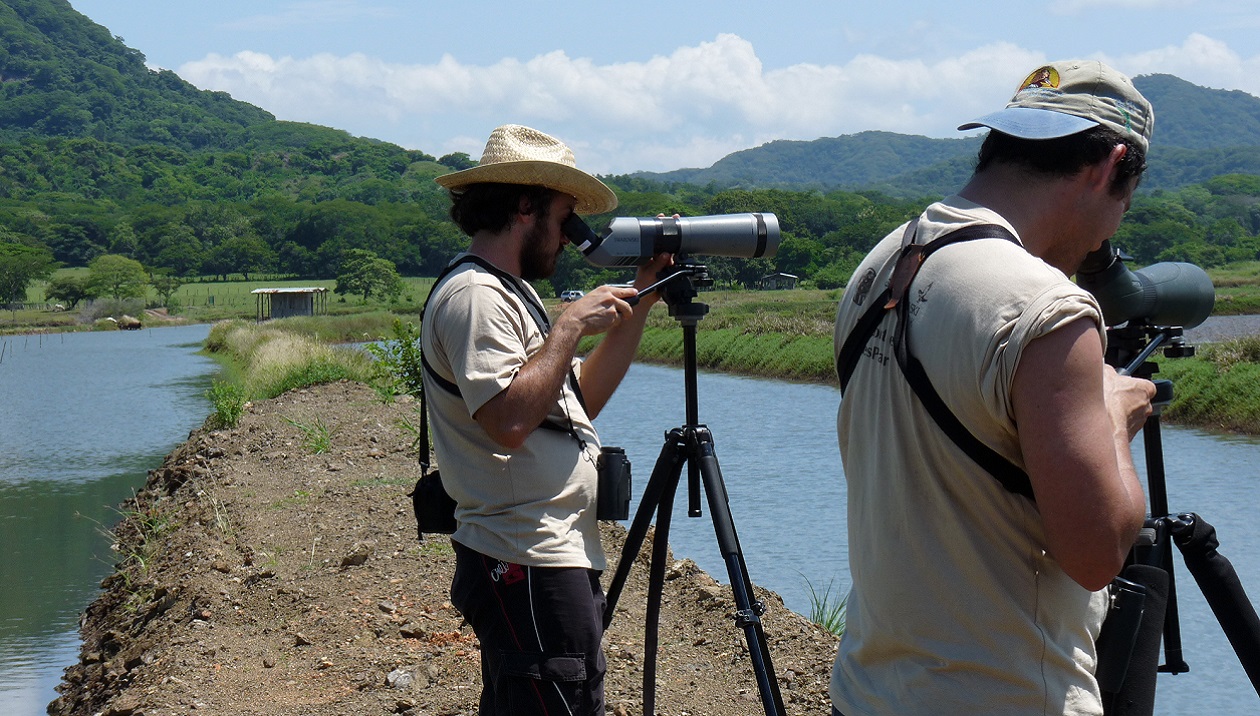 The Yavaros-Moroncárit lagoons in Mexico is host to close to 8% of the global population of the Marbled Godwit (Limosa fedoa) and more than 1% of several populations of species, including the Snowy Plover (Charadrius nivosus), Western Sandpiper, Pacific subspecies of both the American Oystercatcher (Haematopus palliatus frazari) and Red Knot (Calidris canutus roselaari), and the American Avocet (Recurvirostra americana). With the designation of the Yavaros-Moroncárit lagoons as a WHSRN Site of Regional Importance. Mexico now has 20 WHSRN sites, representing 18% of the 111 sites that make up the network.

The Yavaros-Moroncárit encompasses more than 10,000 hectares of mangroves, mudflats, sandbanks, low beaches with stabilizing dunes, and banks with marine grasses and algae. The area has also been declared a Wetland of International Importance under the Ramsar Convention, a Priority Wetland for Shorebirds, an Important Bird Area, and a Priority Wetland for Waterbirds in Mexico.

The research and conservation actions conducted by the Avian Laboratory of the UABCS (Laboratorio de Aves de la Universidad Autónoma de Baja California Sur – UABCS) and Pronatura Noroeste (PNO) have made it possible to demonstrate the importance of this wintering site on the Pacific American Flyway. During their winter monitoring, more than 85,500 shorebirds of 19 species have been recorded. Additionally, it is also a reproductive site for at least four species of shorebirds: Black-necked Stilt (Himantopus mexicanus), Snowy Plover, Wilson’s Plover, and American Oystercatcher.

According to Roberto Carmona, Director of the Avian Laboratory of the UABCS and a scientific advisor for PNO, “Until a few years ago there were still gaps in our knowledge of the importance of the wetlands of southern Sonora, and it was necessary to collect the basic data that allowed us to recognize the regional importance of these sites to make conservation decisions and actions.” 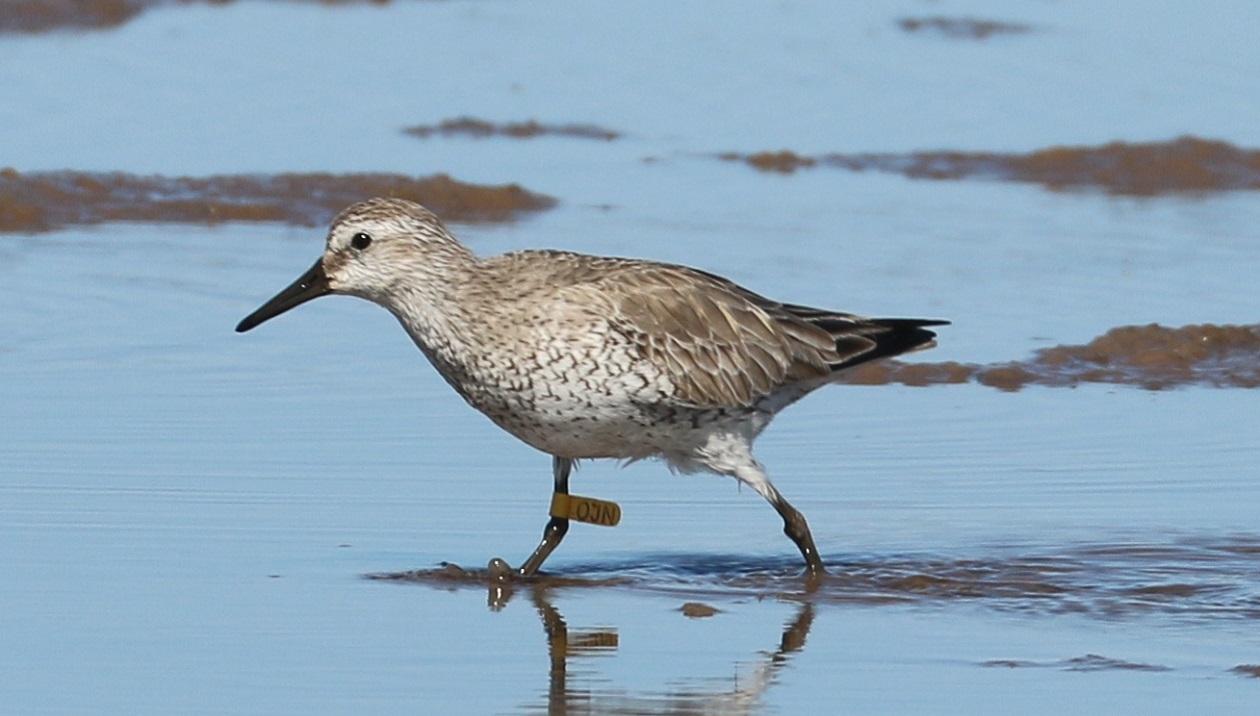 Pacific Red Knot banded in the Upper Gulf of California in 2012 and seen at Yavaros in 2018. Photos: Roberto Carmona.

Some of the principal threats to the site include overfishing, discharges of contaminants, the modification of the coastal zones for the shrimp-farming industry, salt extraction, and ranching. There are also certain negative effects associated with the development of industrial activities in the area and erosion as a result of deforestation for agricultural and urbanization projects. Despite these threats, Natalie Rodríguez Dowdell, Coordinator of the Bird Conservation Program of PNO explains that “the designation of these lagoons as a WHSRN site will considerably strengthen conservation actions, as the resident and migratory shorebirds need them to feed, rest and breed.”

Learn more about the Yavaros-Moroncárit lagoons>> 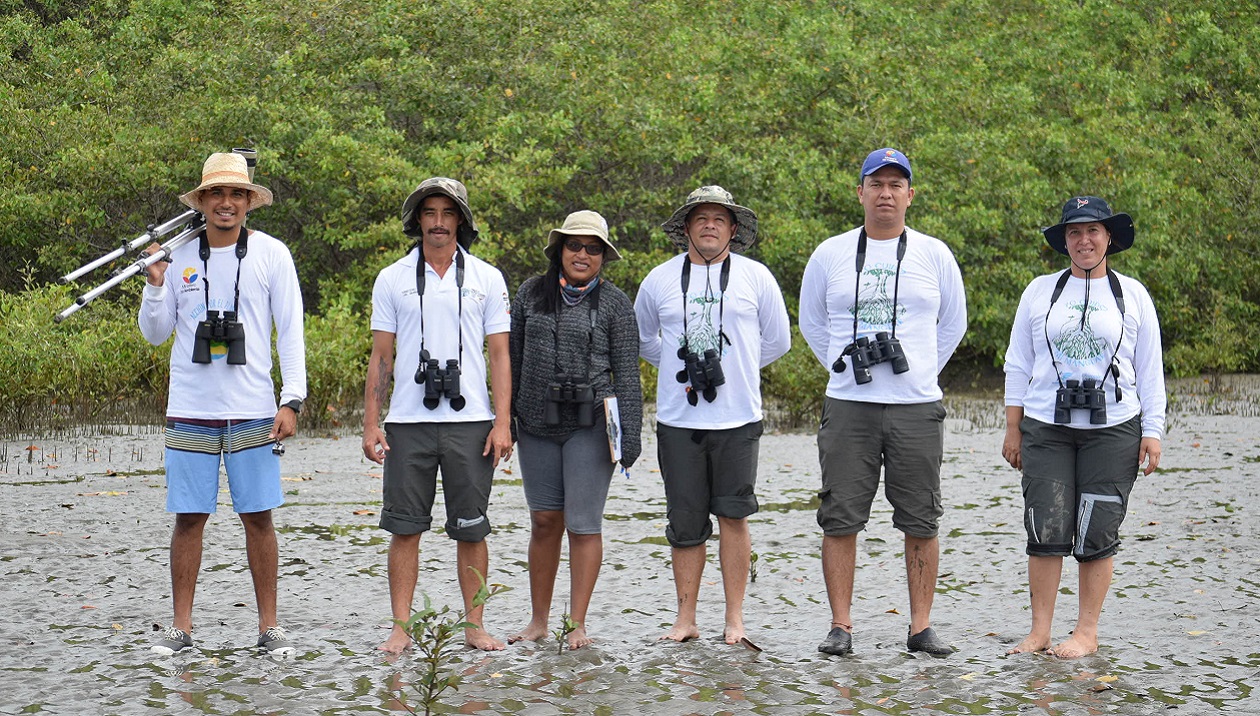 Isla Corazón y Fragata Wildlife Refuge in Ecuador has been designated as a WHSRN Site of Regional Importance because of the presence of more than 1% of the biogeographic populations of the Wilson’s Plover and Whimbrel.

The Isla Corazón y Fragata Wildlife Refuge covers 2,812 hectares of intertidal mudflats and mangrove forests. Apart from being a Wildlife Refuge, part of the area has also been declared an Important Bird Area (IBA) because of its importance to breeding seabirds and waterbirds.

According to Ana Agreda from Aves y Conservación, who led the nomination of the site, “17 Nearctic migratory species seek refuge in the 2,800 hectares of mangrove swamps and intertidal mud flats of the Isla Corazón y Fragata Wildlife Refuge in the middle of the Chone River estuary, their conservation is key to their survival and being part of WHSRN is the most important step to ensure that management of the site is successfully achieved.”

Sedimentation of the estuary has been identified as one of the main threats to the site. Pollution due to industrial, agricultural, and domestic wastewater discharges is also a threat to the site. However, the Refuge has a professional and committed team that communicates with stakeholders to ensure impacts are minimal. The surrounding communities are also very involved in promoting ecotourism and conservation of the site, a source of income. Other uses by local communities, including fishing and recreation, have minimal impact on the site and are controlled by the authorities.

Canal de Jambelí is located along the Pacific coast in southern Ecuador, forming part of the Gulf of Guayaquil. Canal de Jambelí has been designated as a WHSRN Site of International Importance on the basis of holding over 100,000 shorebirds annually. Specific counts for the area include 105,000 Semipalmated Sandpipers (Calidris pusilla), representing nearly 10% of the species “western” biogeographic population, and a single day count of 1,000 Wilson’s Plovers representing more than 10% of the biogeographic population. Besides these significant numbers, the site also surveys counts that pass the 1% threshold level of several other species, including American Oystercatcher, Semipalmated Plover, and Whimbrel.

“The Guayas River basin is the most important deltaic system on the Pacific coast of South America and gives rise to the Gulf of Guayaquil. The site receives very high numbers of the Semipalmated Sandpiper, but is also of importance for another 18 Nearctic migratory species, becoming a critical area for their conservation,” says Ana Agreda of Aves y Conservación, who led the nomination process. Agreda adds, “The designation of the Canal de Jambelí as a WHSRN site will help us successfully conserve thousands of hectares of critical habitat at one of the most important sites in Ecuador where shorebirds congregate.” 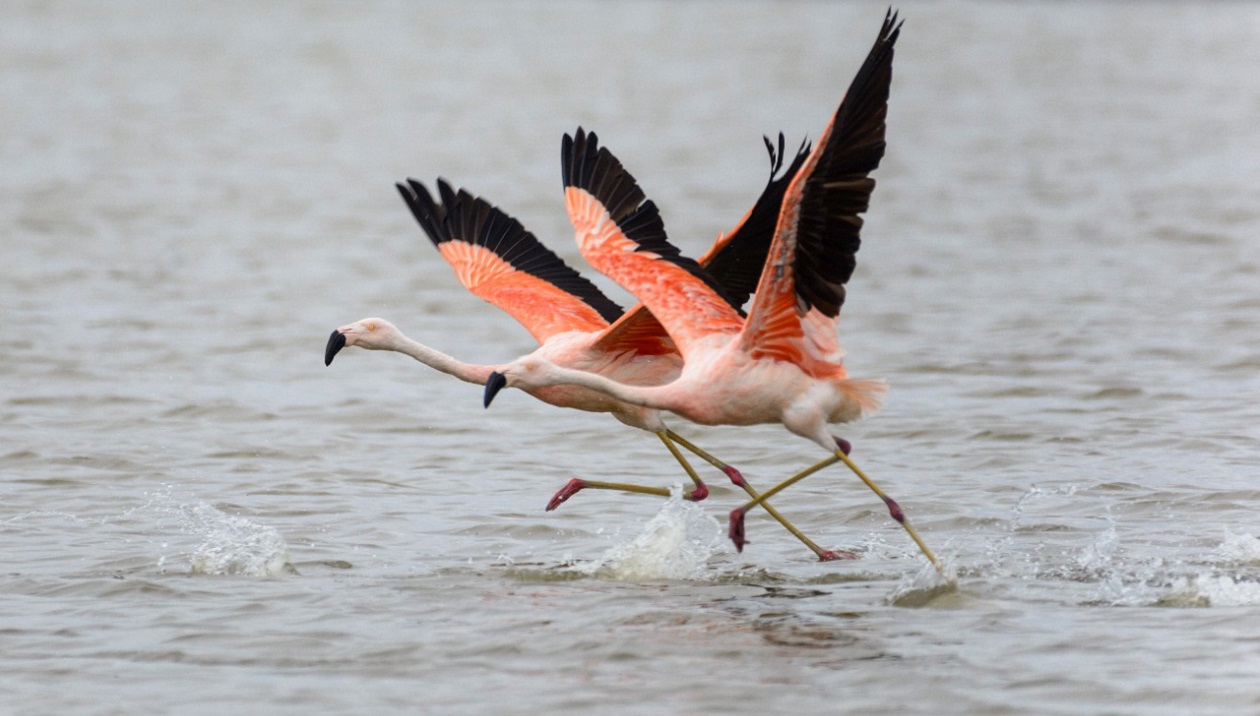 The biodiversity of the site include mangroves and several waterflow birds, as the Chilean flamingo (Phoenicopterus chilensis). Photo: Aves y Conservación.

The designated site includes the 35,000 hectares of the Manglares Churute Ecological Reserve, which is also a Ramsar site. The Reserve’s management plan recognizes key threats like deforestation of mangroves due to the expansion of shrimp farms, pollution from the aquaculture industry, and waste from nearby cities.

More than nine thousand hectares of the WHSRN site represent a community concession area for sustainable use. Here, three local communities, including the Artisanal Fisheries Production Cooperation of Nuevo Porvenir, the Crab-harvest Association of 6 de Julio, and the Crab-harvest Association Balao, are recognized as traditional users and are the custodians and managers of the remaining mangrove areas.

Read More From Our July 2021 Newsletter

How Is Climate Change Impacting Food Availability For Shorebirds?