Whimbrel flock on the coast of Brazil, December 2018. Photo by Alan Kneidel. 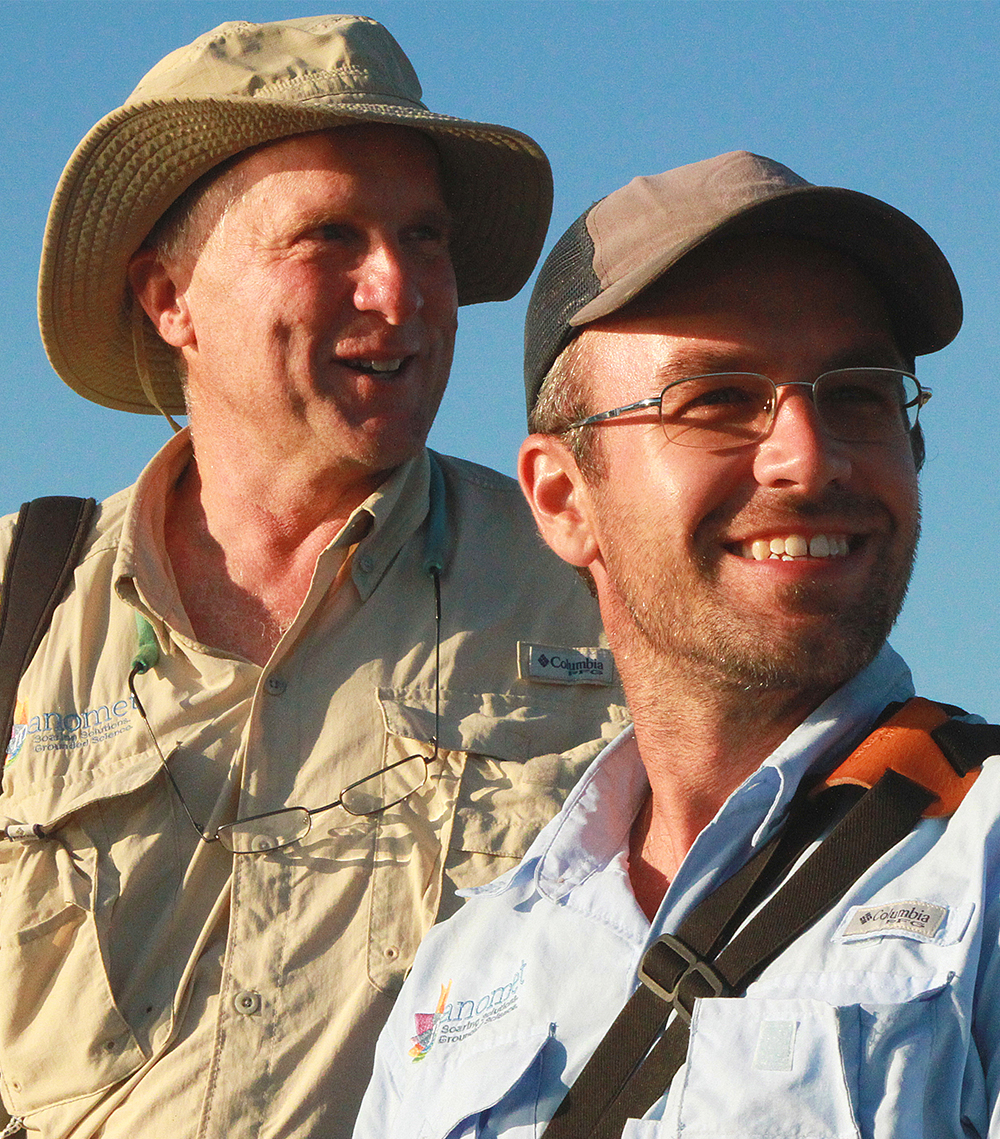 Many populations of large, migratory shorebirds, including Whimbrels and other curlew, are experiencing significant declines at a global scale. These declines can be attributed to individual threats such as unregulated hunting on their wintering grounds, but most declines are the result of cumulative threats throughout the migratory life of each bird.

Our local curlew, the one that frequents eastern Massachusetts in the late summer and fall, is called the Whimbrel (Numenius phaeopus). Manomet is studying Whimbrel migrations to help understand where and when conservation actions are needed to improve the life-supporting conditions on the ground for this and all shorebirds. From July through late September, Whimbrels migrate southward from their Arctic and sub-Arctic breeding grounds and some spend up to a month with us along our coast. While in Massachusetts, Whimbrel spend almost all of their time in the saltmarshes feeding on fiddler crabs—an important staple in their diet. After replenishing their energy reserves, Whimbrels in Massachusetts will typically make a non-stop, trans-oceanic flight to their wintering grounds in the Caribbean Islands or all the way to the north coast of South America.

“This bird is an ambassador for the health of a larger system.”

We have deployed transmitters on six Whimbrels in Cape Cod since 2015. These powerful devices allow us to collect detailed information as often as every 24 hours. Because Whimbrels are spending time at places where many shorebird species find shelter and resources, we can identify locations that are important for much more than just Whimbrel. Here in Massachusetts, we believe that Whimbrels are an ideal umbrella species that can represent the combined value of the saltmarshes and adjacent sand-spit islands of the outer coastal edge of the US Atlantic.

Sachem after her release in 2017. Photo by Brad Winn.

Liz Baldwin of BiodiversityWorks with Brad Winn and Alan Kneidel during the 2018 field season in Wellfleet.

Working in the field.

Whimbrel on its breeding grounds, Photo by Brad Winn.

In September 2017, we tagged Sachem, a juvenile Whimbrel, in Wellfleet, Massachusetts. After being attached with a transmitter, she migrated south to a remote mangrove-covered coastline in Venezuela where she has remained for two years and counting. The data she transmits is shedding light on the behavior of Whimbrels during their first years of life—an area in shorebird ecology that has been widely unexplored until now. We anticipate that Sachem will make her first flight northward perhaps as soon as Spring 2020.

In late May, Ahanu continued northward to his breeding grounds, which we now know lie within the Northwest Territories of Canada in the vast wetlands west of Hudson Bay. Whimbrels have strong site fidelity (commitment to returning to the same site year after year) for nesting and wintering, so we are confident that Ahanu returned to a very familiar place. In late July, Ahanu flew to the coast of Hudson Bay, Canada, where he stayed for nearly a month. Ahanu took off from there on Aug 19th, making a dramatic non-stop flight over Quebec, off the coast of Nova Scotia, and then returned to Cape Cod! 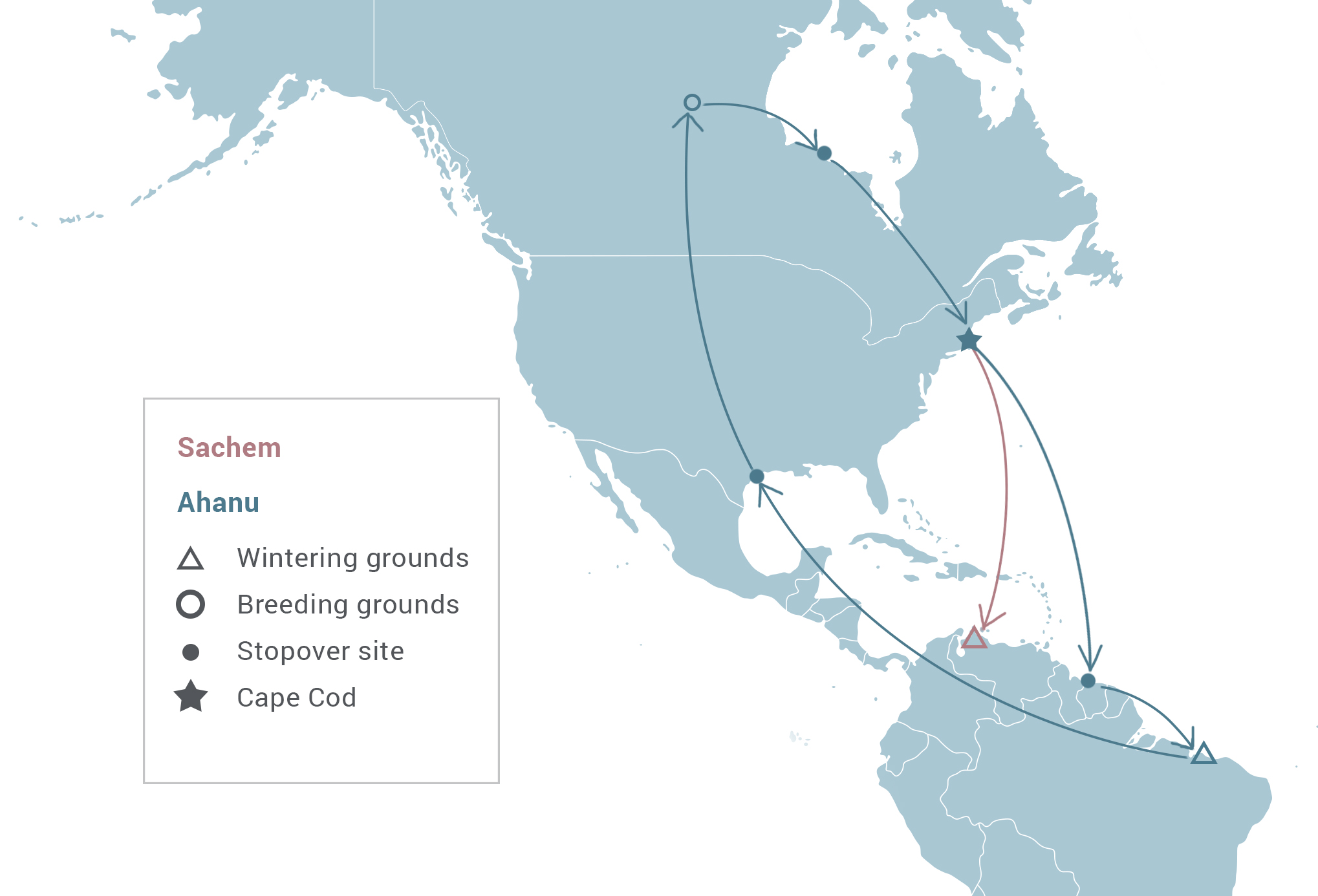 Manomet’s considerable suite of projects under our Shorebird Recovery Program addresses the necessary steps of successful conservation planning and management implementation. We identify priority focal sites, answer key conservation questions with our research, educate the public through workshops and outreach, and work with a growing number of biologists and landowners to improve important habitat conditions. We work throughout the Americas, from the high Arctic to Patagonian shores—essentially wherever shorebirds can be found in the hemisphere.  Manomet’s shorebird staff have led efforts and worked collaboratively toward conservation solutions for decades. Through tracking species like Whimbrels, we are able to inform critical decisions that can help protect the areas shorebirds rely on most. 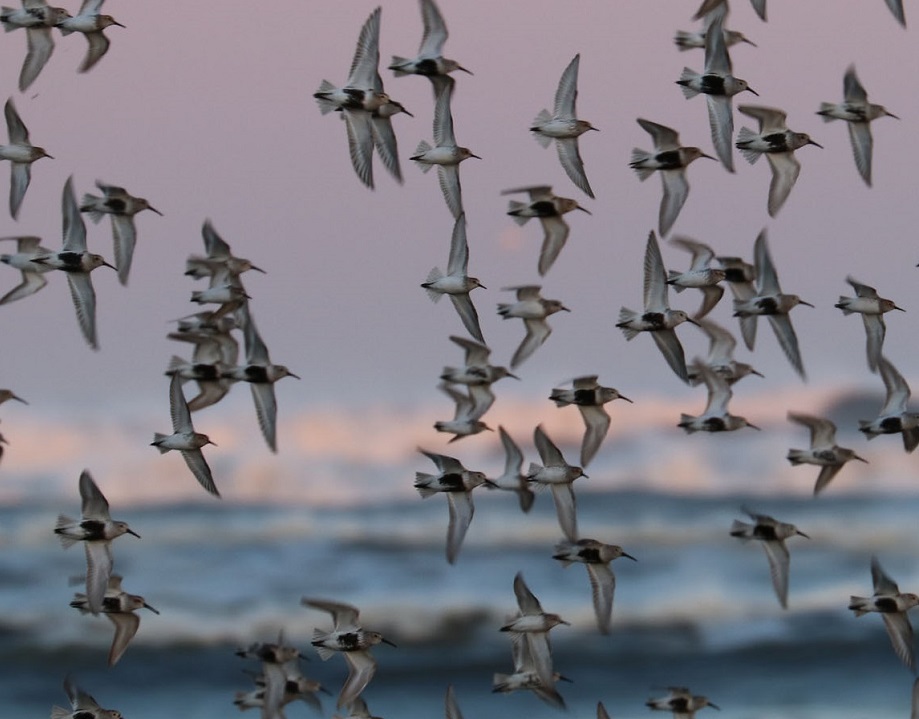