The first Trout Lilly of the season.

Fresh green leaves are starting to emerge on the Norway Maple by the banding patio, and other trees around the property are following suit. During our third week, we banded 115 new birds and 161 recaptures, bringing our season totals up to 277 new birds banded and 360 recaptures processed. New species for the week include Orange-crowned Warbler, Wood Thrush, Swainson’s Thrush, Ovenbird, Warbling Vireo, Blue-headed Vireo, Northern Parula, and Yellow Warbler. This brings our species total for the spring up to 43.

The first Trout Lily of spring bloomed this week on Monday in the Manomet Gardens. Also on Monday, we caught an Orange-crowned Warbler; these warblers are more often caught in the fall at Manomet and are more frequently seen on the west coast. This can most likely be attributed to their breeding range, which encompasses more of the west coast. On Tuesday, visiting Wheaton College students were able to see North Atlantic Right Whales skim feeding near Manomet Point along with Northern Gannets gliding by.

Wednesday dawned with the calmest weather we’ve had yet this banding season. While opening the nets along the bluff, Evan L. watched two coyotes running along the beach, paws clattering on stones below in the predawn light. With no winds and partly cloudy skies, the ocean was glass flat, making for perfect scoping conditions. We observed rafts of Common Loons as they vocalized together, along with some lingering Horned Grebes. The flat water also offered great views of North Atlantic Right Whales feeding in the canal. 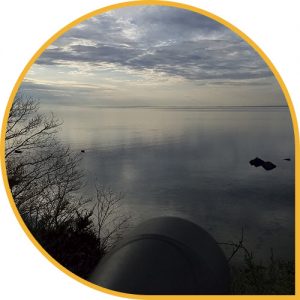 South winds overnight Thursday led to small flocks of warblers across the property, including Black-throated Green Warbler, Myrtle Warbler, Black-and-white Warbler, Blue-headed Vireo, and Yellow-throated Vireo. While taking a Scituate High School Ornithology class around the net lanes, we flushed a Least Bittern from the “Big Bog.” The last eBird record for Least Bittern on Manomet’s property was from 1974 when one had been found dead near Scokes Pond. An expedition to relocate the bird and obtain photos was unfortunately unsuccessful.

Friday started cloudy, but the sun came out for a short time in the afternoon, which almost immediately drew Garter Snakes out onto the net lanes to sun themselves. The other half of the Scituate Ornithology class visited on Friday, and, following some intense scoping off the bluff, the class was shown several species of birds in the hand including Black-and-white Warbler and Blue-headed Vireo. On Friday alone, we had 10 Blue-headed Vireos throughout the day. Based on the last 10 years of banding data, only 1-3 are caught in the spring, normally. The recent poor weather seems to have slowed migration in most of the Northeast; only in the past two weeks have we had small pushes of migrants moving through. The numerous rain storms the last few weeks delaying migration may be why we caught so many Blue-headed Vireos in one day.

In other news, it seems the American Kestrels that had been a regular sight on the Holmes Farm (and the tall kestrel nest box) have moved on and haven’t been seen since Monday…