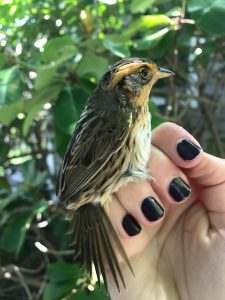 The Providence Journal just published a great article by Alex Kuffner about the challenges of the Saltmarsh Sparrow: Against a rising tide, the saltmarsh sparrow could be headed for extinction .  “It’s a tiny thing, five inches long and half an ounce, and in the drowning marshes of Rhode Island, this resourceful bird is locked in a race with the rising sea. The very species is struggling to keep its head above water.”  This article inspired Trevor Lloyd-Evans, Director, Landbird Conservation to take a look at what we’ve observed about the Saltmarsh Sparrow in Manomet’s Banding Lab.

At Manomet, the landbird migration banding habitat sits about 70 feet atop a coastal bluff on Cape Cod Bay, with nary a saltmarsh within miles.  So even though we have spring and fall data since 1966, our 50 mist nets have only captured 38 Saltmarsh/Nelson’s Sparrows – less than one per year.

Research by Rising and Avise (1993), Greenlaw (1993) and others led to the recognition of the Saltmarsh Sparrow as a different species from the very similar Nelson’s Sparrow. Saltmarsh breeds approximately south of southern Maine; Nelson’s north and west of that region.

Of the 38 birds banded here, only 3 (all hatching year birds) were seen in the fall, while the other 35 were spring birds, like the photograph of the Saltmarsh Sparrow we banded on May 17th this year.  We seem to capture about twice as many Saltmarsh Sparrows as Nelson’s, but our dry brushy habitat with stunted forest and fresh marshes is equally unappealing to either species of marsh-loving sparrow!

During a Breeding Bird Census of the fields at Bay Farm, Duxbury, Plymouth Co. in 1976, we found a Saltmarsh Sparrow nest in a fresh marsh area about 300 yards inland from the coast at Duxbury Bay.  Perhaps a re-nesting after the first attempt in the nearby saltmarsh was washed out?  They fledged four healthy young.