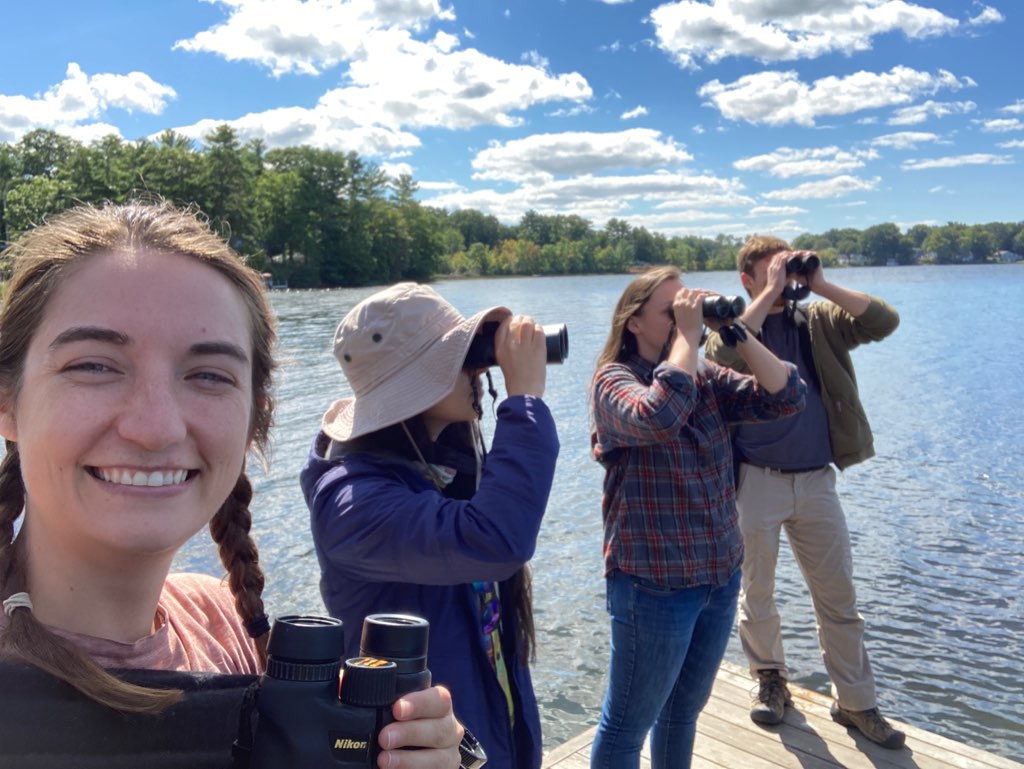 Northern Saw-whet Owls are one of the smallest owl species in North America, weighing about the same as a bar of soap. In the fall, they migrate from northern Canada to as far south as Georgia. Saw-whets are one of many irruptive bird species, meaning large numbers of these birds will move out of their normal geographic range in search of food or habitat when resources in their native range are scarce. Several other species such as Pine Siskins and Red-breasted Nuthatches also follow irruptive years. When Saw-whets have a good breeding year, there are too many individuals to live off the resources to the north, so many of them will migrate south in search of a place with adequate prey and habitat to spend the winter.

Each October, we banders dedicate a night or two per week to try and catch and band owls that use the forests on Manomet’s Plymouth property. We typically catch one or two Saw-whets or Eastern Screech-Owls per season, if we’re lucky; but this fall, we’ve captured five Saw-whets since beginning our owl banding efforts! This is an exciting learning opportunity for us and we are pleased to share a little about the process and purpose of owl banding, especially with Halloween right around the corner.

How do you band an owl?

All five Saw-whet Owls we’ve captured this season have been hatch-year birds. One way to determine a bird’s age is to look for molt limits, which are places in the primary and secondary feathers on a bird’s wing where it appears that they are still replacing old feathers with new ones. Hatch-year birds should have uniform coloration on the primaries and secondaries, while adults would have a mixture of older, worn feathers and newer, fresher feathers. Owl feathers also contain a pigment called porphyrin that glows under ultraviolet light; the brightness of the pink glow fades over time and can be used to age the bird. Pinker feathers contain more pigment and shine brighter, while older feathers contain less as the pigment fades over time.

We also collect measurements to record a bird’s overall size. One of these measurements is a “wing chord,” where we measure the length of a bird’s wing from its wrist at the bend of the wing to the tip of the longest primary. In general, male Saw-whets are smaller than females, so we can determine sex in some birds, while others are unknown because the measurements overlap between males and females. Since owls are sensitive to bright lights, we keep the lights as low as possible while banding and taking photos for future reference. While releasing birds after banding, we place them on a bench and watch to be sure they fly safely away.

Since owls are nocturnal (most active at night), they can be difficult to detect compared to diurnal (active during the day) species, like those we focus on at the banding lab. By banding owls, we can collect data on when owls migrate, what kind of habitat they prefer, and ratios of males to females. Banding owls also contributes important data on migration routes and age. When an owl banded at one station is recaptured at another, banders can potentially determine the route an owl took on migration. One of the most important pieces of data we can determine is average lifespan—the Cornell Lab of Ornithology has a record of a Northern Saw-whet Owl that was over nine years old! Owl banding can address questions about migratory patterns, population trends, the effects of declines or increases in population, the role of climate change in arrival time and population numbers, and much more.

Research efforts like Project Owlnet aim to support the expansion of migrant owl banding stations, advocate for standardized netting protocols, and improve communication and coordination among owl research stations. Although Manomet is not part of Project Owlnet, since our focus is passerine (songbird) migration, the few nights a week that we attempt owl banding adds important data to where, when, and how far Northern Saw-whet Owls migrate. You can learn more about Project Owlnet and other owl banding stations across North America here.

We will make a few more attempts at catching owls this year before the end of our banding season on November 15. Be sure to follow our weekly banding summaries posted online every Monday to stay up-to-date on our banding efforts.

Life in the natural world needs our attention now more than ever.