Sunset over the big bog.

This week we ended with 53 new birds banded and 61 recaptures processed. This brings out total new birds banded up to 335 and recaptures to 266. We caught 6 new species this week including Black-throated Blue Warbler, Prairie Warbler, Veery, Brown Thrasher, Wilson’s Warbler and a bird only caught twice in the last ten fall seasons, a Cape May Warbler!

On Tuesday the banders participated in the September iNaturalist Mini-Bio Blitz on the property. We saw 109 different species total, with 31 insect species and six species of amphibian including a Pickerel frog which was the first record for the property. Wednesday was very humid and when the sun came out, very hot. Throughout the day we’d hear Gray Tree frogs and Spring Peepers calling. Back in the spring, Gray Tree frogs would call explosively from the bogs, at times loud enough that your ears would hurt. We’ve seen the result of their successful breeding this fall, seemingly almost every leaf you look at has a small green lump of a young Gray Tree frog camped out on it. This could be due to the wetter than average spring we experienced, keeping the water level in the bogs at capacity and creating a breeding oasis for them along with other amphibian species.

Thursday was the highlight of the week, with some north winds overnight, we banded almost all our new species for the week on Thursday, including the Cape May Warbler! This female hatch year bird appeared rather drab but was recognizable by its slightly curved bill, streaked upper parts and yellow-olive upper tail coverts. Cape May Warblers feed mainly on invertebrates and favor the spruce budworm especially but will also probe flowers for insects and nectar. These birds are uncommonly caught at Manomet most likely because of their declining population and their more westerly migratory route. While walking up the road returning from a net run Megan and Evan spotted a small lump in the road, and sneaking closer, they realized it was a young White-footed mouse, with a small red berry clutched in its paws. Fixated on its meal the mouse allowed them to get closer and snap a few photos before scurrying away into the leaf litter. 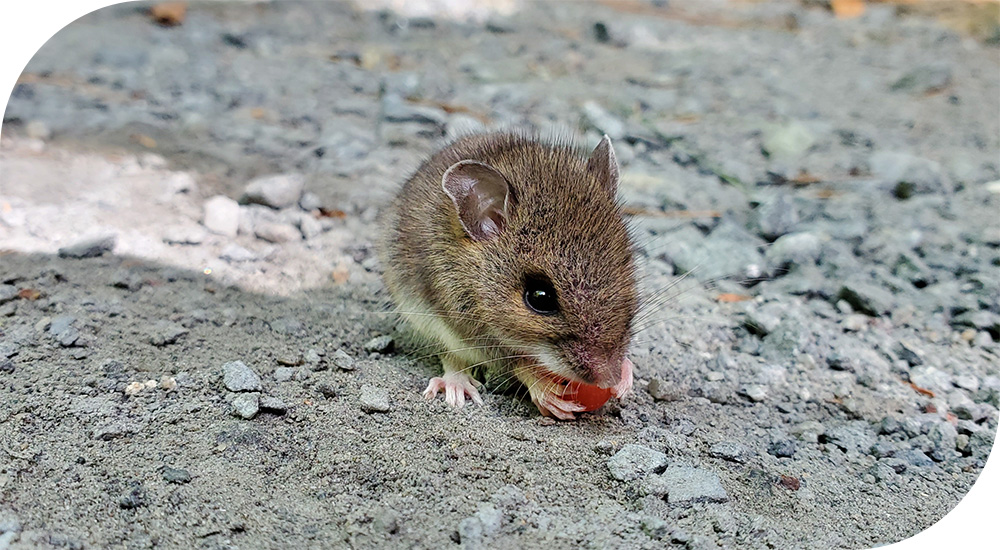 Friday ended up being a slow day for us banding. It was cloudy to begin and as the day wore on conditions deteriorated as the wind picked up and and rain bands from Hurricane Dorian swept towards the Cape and Islands. With strong northeast winds several pelagic species were blown within sight of the bluff. Scoping arduously from the bluff between net runs and straining our eyesight we saw Great, Sooty, and Manx Shearwaters, along with Northern Gannets and distant jaegers sailing by, artfully dipping in and out of waves.
Cheers,
Megan, Sarah, Evan and Nick
Back to all summaries