Manomet is excited to be working with the South Carolina Department of  Natural Resources, the University of South Carolina, and the Cornell Lab of Ornithology on this exciting discovery of Whimbrel in South Carolina.

CHARLESTON, S.C. (June 15, 2021) – It’s not every day that someone discovers a new-to-science bird migration spectacle. It’s even more unexpected that such an encounter – in this case, tens of thousands of shorebirds gathering during their annual journey north – would be just a stone’s throw from a metropolitan area. But two years ago, that’s exactly what happened in coastal South Carolina.

In May 2019, South Carolina Department of Natural Resources (SCDNR) biologist Felicia Sanders and a team of researchers confirmed that approximately 20,000 whimbrel were roosting at night on a small island during their spring migration. The team documented similar numbers again in 2020. This single flock includes nearly half of the declining shorebird’s estimated eastern population: a staggering spectacle hiding in plain sight. The findings were recently published in the peer-reviewed scientific journal Wader Study.

Sanders has devoted her career to protecting South Carolina’s coastal birds. After decades of exploring the coast, few are more familiar with the way shorebirds and seabirds use the state’s salt marshes, tidal creeks, and barrier islands. But when Sanders pursued a hunch about the large numbers of whimbrel she saw congregating at Deveaux Bank – a small island just 20 miles south of Charleston – she could barely believe what she’d found.

“A lot of people were skeptical, but after tallying results from coordinated surveys by fellow ornithologists and video documentation, we are certain of the magnitude of the flock,” said Sanders.  “Finding so many whimbrel here gives me hope that we can turn the tide for this and other declining  shorebird species.”

Whimbrel are large, striking shorebirds known for their downcurved bills, which are ideally adapted to plucking fiddler crabs from muddy burrows. Like many shorebirds, they migrate incredible distances across the western hemisphere each year, facing threats including habitat loss and overhunting along the way. In the last 25 years, whimbrel declined by two-thirds across the Atlantic Flyway, the eastern portion of their population. The discovery of a roost of this size – the largest known for the species – is of critical importance to successfully protecting this rare shorebird.

After spending the winter on the coasts of South America, whimbrel fly thousands of miles north to nest and raise young across subarctic regions of Canada and Alaska. They typically make just one stop along

the way. For many of these birds, that stop is in South Carolina, where they rest and feed on rich coastal nutrients that will fuel their breeding season.

At high tides and at night, when feeding habitat and other safe resting sites are inundated, whimbrel flock together for safety. They seek large, isolated offshore refuges like Deveaux Bank, where disturbances from people and predators are minimal. But relatively few such places remain along the  Atlantic coast.

“Having such a globally important phenomenon occur right here in our own backyards, that’s really something to be proud of,” said Sanders. “And I think it’s really important to understand that biologists aren’t the only ones that care about these birds. Local communities take ownership of places near their homes. It really does take a village to protect places as important as Deveaux.”

Riley Bradham, the mayor and lifelong resident of nearby Rockville, agrees. “It’s a special place,” said  Bradham, who has been visiting Deveaux for his entire life and working for years with SCDNR to protect birds on the sensitive island. “We all love it, but it’s one of the last special places.”

In early 2019, Sanders’ discovery inspired collaboration between the South Carolina Department of  Natural Resources, the University of South Carolina, the Cornell Lab of Ornithology, and the conservation nonprofit Manomet to census and film this nocturnal roost during peak migration in April and May. For optimal visibility, the shorebird biologists, along with videographers specializing in filming sensitive wildlife, converged on Deveaux on full moon nights as flocks of whimbrel arrived during and after twilight.

“We worked to visually document what Felicia and the team have uncovered here, because this truly unique spectacle underscores the value of the wild spaces still left intact on our southeastern coasts,”  said Andy Johnson, who led a team from the Cornell Lab’s Center for Conservation Media to film the whimbrel roost.

A shorebird roost of this magnitude offers a glimpse of the abundance that was once widespread across the Atlantic coast and now stands as a testament to South Carolina’s commitment to coastal habitat conservation.

“There’s only one place in the world, one place on Earth where 20,000 whimbrel land on an ephemeral island of really insignificant size,” says Chris Crolley, naturalist, guide, and CEO of Charleston-based  Coastal Expeditions. “That’s Deveaux Bank. Right off the coast of South Carolina. It’s just phenomenal,  isn’t it? It’s nothing less than that.”

Deveaux Bank Seabird Sanctuary is closed year-round above the high-water line, apart from areas designated by signs for limited recreational use (beaches on the ends of the island, facing inland). From  March 15 through October 15, some of the island’s beaches are closed for seasonal nesting of coastal birds and are demarcated by fencing. Dogs and camping are prohibited year-round.

YOU’RE INVITED: On Tuesday, June 22 at 6 p.m., join the team who made the discovery at Deveaux for a free virtual screening and panel discussion. Click here to learn more and register:  http://bit.ly/WhimbrelDiscovery. 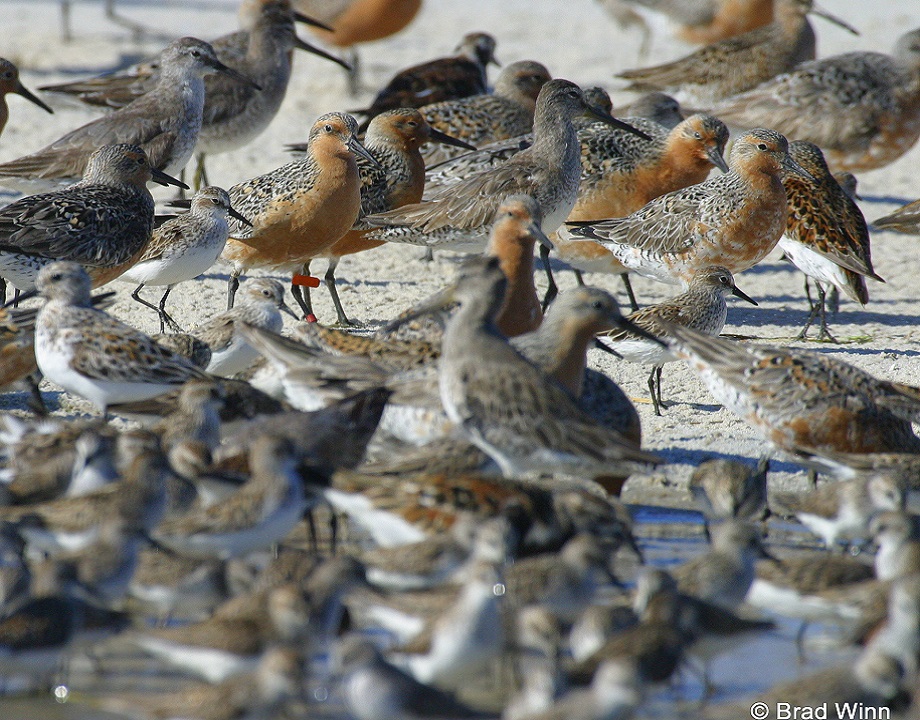 Support our work to protect Whimbrels and other shorebirds.