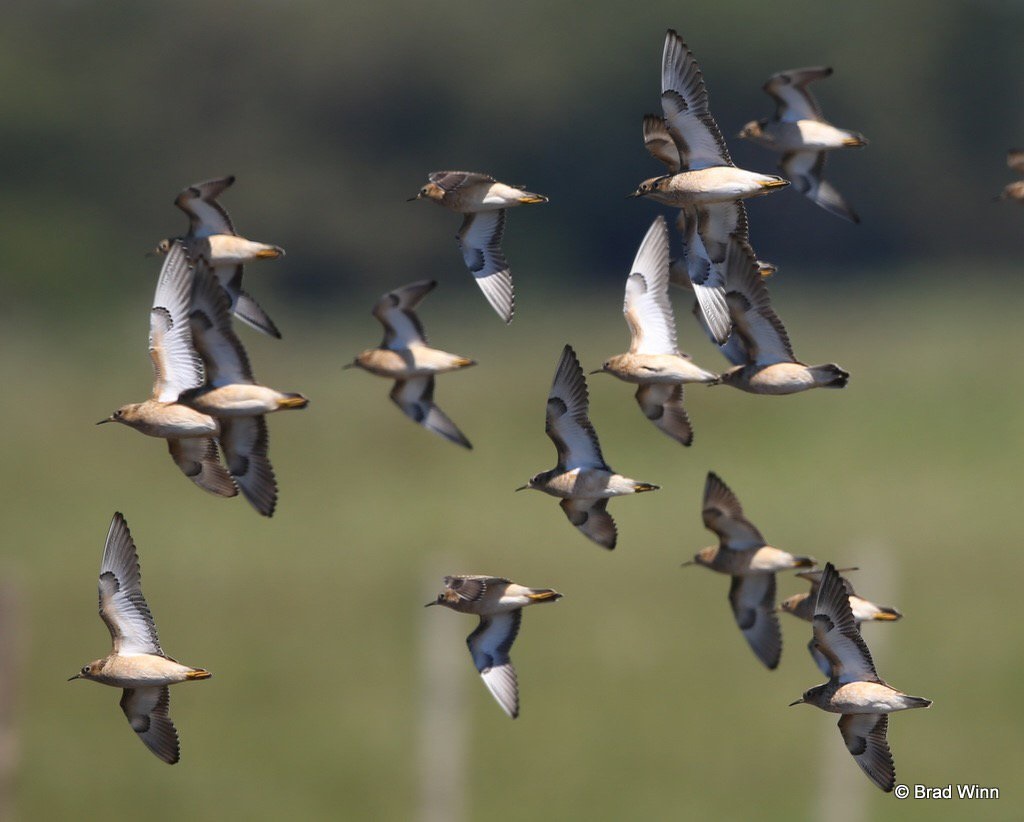 From the Arctic tundra to 4,000-meter-high Andean wetlands, from windswept Patagonian grasslands to the saltmarshes of Cape Cod, shorebirds are adapted to many extremes in nature. High altitudes, high temperatures, high salinity, high winds, deep mud, rocky coasts, freezing conditions, shorebirds can handle it all. An example of shorebird tolerance for extremes is the Whimbrel (Numenius phaeopus). One population of these large brownish shorebirds spends September to April living in the tropical realm of mangrove forests in coastal Brazil. But by late May, the same individuals are pulling frozen cranberries from the snowy foothills of the Hudson Bay lowlands of eastern Canada after their northward annual migration.

Even with this ability to adjust to such physical extremes, shorebirds struggle to adapt to human-induced changes to their habitats throughout their migratory journeys. Globally, six shorebird species have gone extinct since the 1500s, with another eight on the brink. Among those on the brink is the Whimbrel’s close relative, the Eskimo Curlew (Numenius borealis), once one of the most abundant shorebirds in the Americas. This incredible and beautiful bird almost certainly no longer exists. Today, shorebirds are undergoing one of the most dramatic declines of any bird group around the world; the recent “three billion birds” analysis of declines in the North American avifauna documents declines of more than one-third of coastal shorebird populations since 1970.

To address these precipitous declines strategically and expediently, Manomet has launched the Coalitions for Shorebird Conservation, with the intent to stabilize and rebuild shorebird populations and their vital habitats, site by site, throughout the Americas. This is no casual feat, and before beginning work on this ambitious goal, we had to recognize several inherent challenges to overcome to make this a successful effort.

The first is that shorebirds are some of the most migratory animals on the planet, and would need concerted management actions from many partners, spread over an enormous geography, all working toward the same outcomes. Also, shorebirds depend on networks of critical migration stopover and wintering sites, whereby changes at any one location can threaten the whole population; so, knowing the most important sites would be critical. The third, and maybe the most daunting challenge, is that coastal, freshwater wetland, and grassland habitats favored by shorebirds are among the fastest disappearing habitats in the world, and innovative ways would be required to preserve remaining pristine areas and restore degraded areas. If habitat loss isn’t enough of a problem to overcome, compared to other bird groups, shorebirds are under-appreciated by the public as “all gray, impossible-to-identify birds,” even among birders and conservation biologists.

Yet, shorebirds are among some of the most awe-inspiring of all bird groups. Few could watch a closely-packed flock of shorebirds in flight as they swirl and ripple in the air while avoiding a falcon and not be impressed. Topping the list of the awe-inspiring, the longest nonstop flight of any bird is the migration of the Bar-tailed Godwit (Limosa lapponica) from its breeding grounds in Alaska flying no less than 7,000 miles to wintering areas in New Zealand—a nine-day continuous flight without any stops down the length of the Pacific Ocean.

Birding on the Georgia Coast. Photo by Brad Winn.

“Shorebird migration provides a sense of connection,” says Brad Winn, Director of Shorebird Habitat Management at Manomet. “Knowing that the Red Knots nesting on the rocky ridgetops of the Seward Peninsula in Alaska are the same birds being seen along the Pacific coast of Mexico helps remind us that we all share these amazing birds. We also share the responsibility to provide them with what they need throughout their extraordinary travels.”

Manomet has a long history of being at the vanguard of shorebird conservation efforts in the Americas. Scientist Emeritus Brian Harrington’s realization that many shorebird species congregate at just a few sites led to the launch of the International Shorebird Survey (ISS) in 1974. The early results from ISS surveys helped inform the development of the Western Hemisphere Shorebird Reserve Network (WHSRN), officially launched in 1985. Manomet has housed the WHSRN Executive Office for almost its entire existence, leading numerous workshops to train successive generations of shorebird conservationists throughout the Americas, as well as helping to promote the conservation and inform the management of many sites.

Knowing where shorebirds go, knowing what they need when they get there, and understanding the threats to those birds and how to address them to safeguard a population are all important considerations. For species dependent on specific sites, successful conservation efforts depend on safeguarding the biological integrity of the habitats they need and helping to increase the ability (capacity) of local organizations to deliver effective management and protection. But, given the scale of the threats to shorebird populations, can we design site-specific actions with the potential to scale-up to restore shorebird populations throughout the hemisphere? With support from BAND and Bobolink Foundations as well as R. Howard Dobbs Jr. Foundation, David and Lucile Packard Foundation, and the National Fish and Wildlife Foundation’s Conservation Partners Program in partnership with the USDA’s Natural Resources Conservation Service, Manomet’s Shorebird Recovery Program is working to answer this question. As a first step, 13 of the most important sites for shorebirds in North, Central, and South America have been selected to test a targeted site conservation approach. At each important location, we are enhancing the quality and quantity of critical shorebird habitats.

Working with local partners at these sites, our team is focusing on: 1) building capacity in local organizations to help them deliver more effective conservation actions and protections; 2) helping them identify, prioritize, and then address the greatest local threats like unleashed dogs and disturbance from beach-driving; 3) assessing the value of ecosystem services to identify opportunities for human wellbeing benefits; 4) working with our partners to measure the response of shorebird populations following management actions, such as a change in cattle grazing practices as an example. To implement this work, with partners, we are engaging local communities and leaders to build support for conservation, creating targeted opportunities to take action, and advocating for greater protection and conservation measures. By working with, and learning from our site partners, together we will address the specific needs of shorebirds at each of their most critical locations.

The key to the success of these efforts is building a long-term culture of appreciation and conservation ethic, with public support for changes in both policy and practice. “Focusing on enhancing local partner capacity is the magic recipe for how this all works,” says Stephen Brown, Vice President of Shorebird Conservation. “However, we need broader coalitions of organizations at each site that work across sectors. This will help integrate shorebird conservation needs with other site interests, such as economic development and recreation.”

To help facilitate this, Manomet is also working with existing donors and partners to build coalitions of supporters and develop innovative funding mechanisms to ensure the sustainability of conservation impacts over time. Furthermore, site-targeted efforts will be scaled nationally and internationally through close collaboration with other conservation initiatives and groups, to help enhance capacity to achieve common conservation goals. One of the remaining challenges, though, is figuring out how to work effectively across all sites that are key for shorebird conservation in the Americas. In the words of Enrique Bucher (WHSRN Councilor Emeritus), sites need to “make more connections and to strengthen the fabric…to help and interact with each other more.” Manomet has chosen the first 13 sites which combine a mix of shared shorebird species with common themes (threats and/or approaches to addressing them). This maximizes the potential to act as examples and catalysts for action within the context of the three flyway-scale initiatives (Atlantic, Midcontinent, and Pacific). For instance, we are taking action at suites of sites that will:

By building connected networks of sites that focus on addressing the barriers to conservation locally, while simultaneously sharing knowledge and lessons learned across geopolitical boundaries, Manomet and its partners will be able to scale-up actions to increasingly deliver transformative solutions across the entire lifecycle of migratory shorebirds.

The most significant challenge to the future of shorebird populations is the lack of connection between local and global action. Through a targeted approach to site conservation, exchanging experiences between the sites, and integrating them into broader conservation initiatives, Manomet seeks to bridge this divide and inspire and inform changes at global and political levels. We need changes at these broader scales to stop the cycle of firefighting the ever more frequent threats at sites and make real impacts toward shorebird conservation. Without the scaling up of efforts across networks of sites, the list of shorebird populations on the brink will only continue to grow.