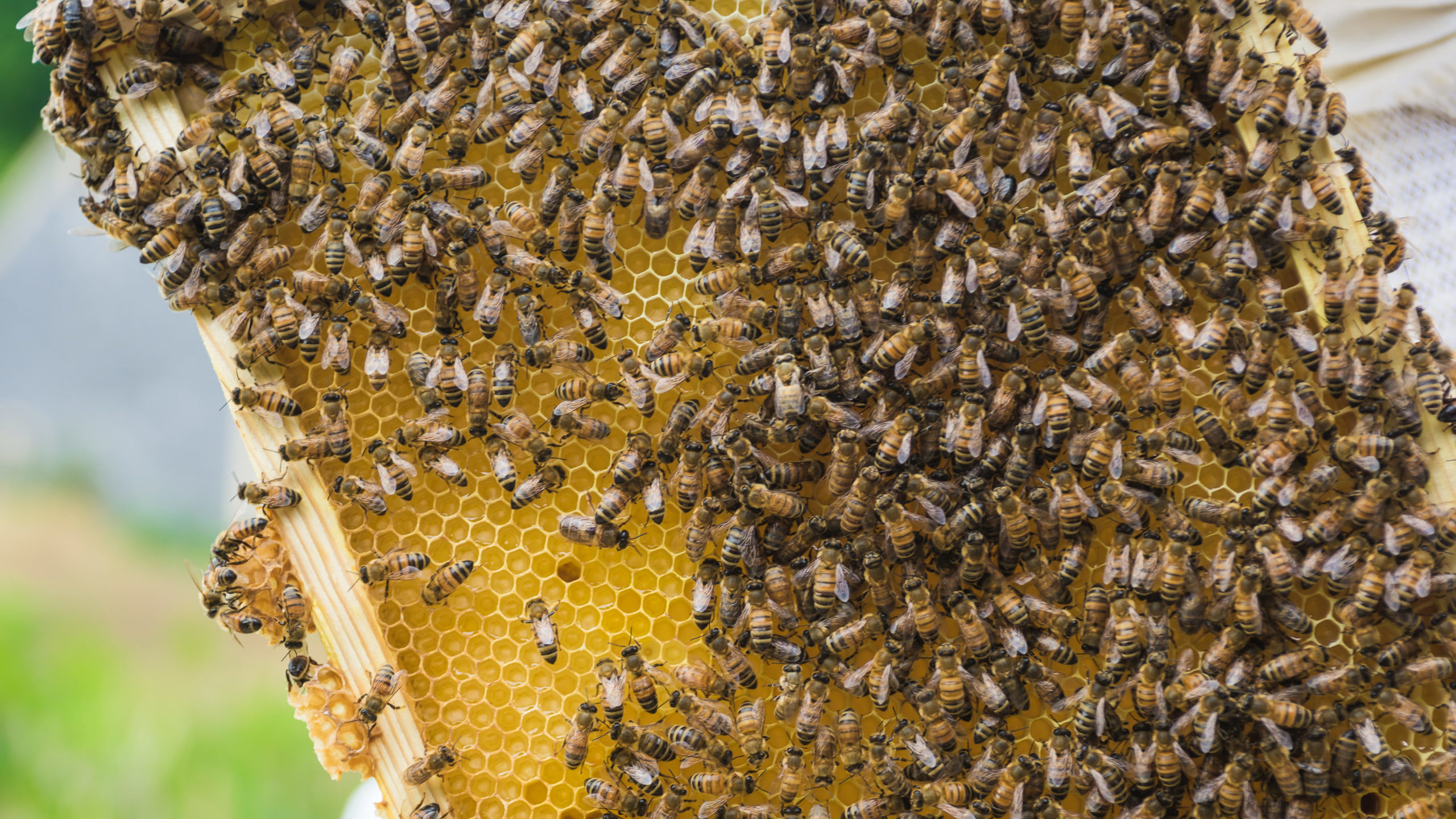 Photos and video in this article courtesy of Clare Cunningham.

There’s no doubt that honeybees are one of the most frequently seen pollinators around Manomet’s headquarters property. “Forager” honeybees — members of the hive that have the sole purpose of going out to find nectar or pollen, collect it, and bring it back to the hive — have been a common sight this spring and summer. For most of us, we’re most likely to encounter a bee when it’s foraging on blossoms or while it’s flying to or from its hive. But behind each forager, there’s a much bigger bee community — and story of care and survival.

This past spring, I had the opportunity to get a more intimate look at the secret lives of honeybees. I shadowed Jim Lifton, a local beekeeper who keeps his hives at Manomet’s headquarters, watching and learning about the significance of bees and following the bees’ saga — from barely surviving another brutally cold New England winter to, thankfully, thriving this summer amidst Manomet’s 40-acre property.

Over six years, Jim has tended hives in a corner of Manomet’s property, providing the hives’ inhabitants with access to the lush meadow and wetland-laced ecosystem that teems with blossoms in spring and summer. Today, Jim’s collection of bees, called an apiary, contains 26 individual hives.

Spikes and drops in temperatures due to climate change mean that bee colonies must be monitored closely to ensure they survive the elements. In mid-March, as I followed along while Jim tended to the hives, the honeybees seemed few and far between, only a handful buzzing in and out of the entrances to the wooden hive boxes they live in. He bundled up the hives in “bee cozies,” made of home insulation and plastic wrapper, to help shelter the bees from the winter wind.

Throughout the winter, Jim also supplemented the bees’ diets with “winter patties,” “pollen patties,” and, when temperatures rose above freezing, with sugar syrup and essential oils. As winter shifted to spring, we saw the entrances to their hives become noticeably more active.

While the temperatures thawed and the bees became more active, Jim watched closely to determine what would be needed to get the beehives up and running in full force for the spring. An experienced beekeeper knows if a queen is present just by observing the behavior of the bees in the hive! A hive with a queen is said to be “queen right,” and the bees in these hives will be less reactive to disturbances in weather, food, etc.

In early April, Jim introduced queens and thousands of bees to start new colonies and boost bee populations. Bees don’t immediately take to a new queen; she is introduced in a “cage” with a sugar cork that she and her new colony chew through. They munch on the cork as they also spend time in close proximity and become familiar with each other’s pheromones — chemical cues the bees emit to interact with and influence one another.

Once a queen is accepted by the colony, the hive becomes self-sufficient. Bees work together to forage for food, lay eggs, raise a brood, and, of course, produce honey! Throughout the spring, Jim monitored the hives closely to make sure no parasites, diseases, or risk of overpopulation threatened the success of the colonies. His efforts have paid off — this summer, the bees are busily and productively making honey with pollen and nectar from Manomet’s headquarters property inside their hives!

Monitoring these hives also provides ample opportunities for curious minds and students to learn from nature. Over the course of this spring and summer, Jim and I have teamed up with Molly Jacobs, Manomet’s Vice President for Environmental Outreach and Education, and Deb Harrison, a Manomet Trustee and Massachusetts-based science teacher, to create virtual educational content exploring the needs of bees, assessing hive health and the impact of climate change, and monitoring the hive for disease. We hope to debut the lessons online later this year.

How do honeybees — a non-native species originally from Europe — fit with Manomet’s conservation mission? The answer is complicated. From an ecological perspective, it’s likely that honeybees are competing for resources with native pollinators such as bumblebees. They may also be helping the spread of invasive plants such as Japanese Knotweed by pollinating them far more effectively than native pollinators, which tend to specialize on native plants. That said, the honeybees do contribute substantially to pollination at the Manomet Observatory and the surrounding region, and it’s unclear what their loss would mean for local flowering plants.

Manomet’s conservation work also includes a commitment to conservation on working lands, and to finding ways for people and nature to coexist, and the honeybee hives support a small business that produces local honey. For Molly Jacobs, the honeybees are both a connection to Manomet’s focus on working lands and an important teaching tool. “I see Manomet Observatory as a microcosm of our broader conservation work, a place we can use for scientific research and teaching focused on flyways, resilient habitats, and working lands and seas.”  Manomet scientists and students are currently collaborating with Jim to monitor pollination activity on the property, including assessing the ecological impact of the honeybees.