American Oystercatcher: Why would a bird need a business plan? 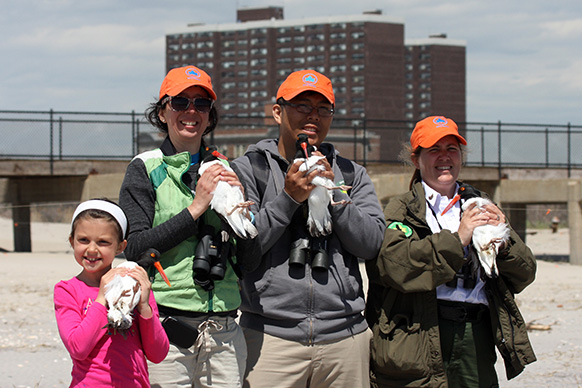 This article was originally published by the National Fish and Wildlife Service. Access the full article here.

Just a few years ago, the future looked bleak for the American oystercatcher.

The charismatic shorebird, easily recognized by its long, red-orange beak and striking, red-rimmed yellow eyes, was once fairly common along the Eastern Seaboard. But by 2008, a mere 11,000 remained, scattered along the country’s shoreline between Maine and Texas. Biologists were projecting a 12 percent drop — maybe more — in oystercatcher numbers over 10 years.

“They were not quite on the brink of extinction, but they were heading that way,” said Shiloh Schulte, an expert on the species with the Manomet Center for Conservation Sciences.

Conservation groups and government agencies already had launched various efforts to stem the losses, but a scatter-shot approach wasn’t working.

The plight of the oystercatcher called out for a new approach in conservation. One that could reach across state lines and link local efforts over the long term. One that could outline specific strategies, coordinate funding resources, and focus on measurable outcomes.

In short, the species needed a business plan. The bottom line, the profit, would be more oystercatchers and more oystercatcher habitat. The hoped-for bonus: More shorebirds of all shapes and sizes, improved fish nursery habitat and cleaner beaches.

In 2008-2009, the National Fish and Wildlife Foundation launched a 10-year business plan to increase the Atlantic and Gulf Coast population of American Oystercatchers by 30 percent — a 42 percent marginal increase over population levels if nothing was done.

Working with about 35 organizations in coastal states, including U.S. Fish and Wildlife Service, Manomet Center for Conservation Science, National Audubon Society and The Nature Conservancy, NFWF began pooling resources and analyzing potential projects to bring relief to the beleaguered but charismatic species.

Now, just six years into the ambitious initiative, the oystercatcher “business” is in the black.

The most recent estimates show a 10-percent rise in oystercatcher population — a huge swing from the 12 percent declines predicted at the start of the project.

In its State of the Birds 2014 report, the North American Bird Conservation Initiative highlights the oystercatcher project as a bright spot in an otherwise troubling outlook for shorebirds.

“Shorebirds are declining more than many other species groups,” the report states. “Counts for 19 shorebird species show an alarming 50 percent decline since 1974.

“… NFWF investments in priority action areas have already stopped a regional decline of American oystercatchers and increased reproductive success. Now the population is growing for the first time in 10 years.”

The report credits the use of “business planning fundamentals [that] tie funding inputs to measurable results” for stemming the oystercatcher decline.

Back in 2008, oystercatchers weren’t the only shorebird in trouble on the East Coast. The red knot, Hudsonian godwit, ruddy turnstone and other species also suffered steep declines.

Scientists within the shorebird community hotly debated whether stepped-up conservation efforts should attempt projects on a multi-species scale.

“I think a rather astute decision was made to focus on the American oystercatcher,” said Ian Davidson, director of bird biology and conservation for NFWF. “By focusing on one species, we didn’t disperse our activities. Having that focus from the beginning allowed us to learn how to do this one species right. That, in turn, moves us into this wider effort of flyway conservation, which helps a wide variety of species.”

By focusing on one species, conservation groups also stood a better chance at keeping the oystercatcher off the endangered species list, a designation that could bring about more costly and disruptive measures in communities along the Eastern Seaboard and Gulf Coast.

This one-species approach made sense, Schulte agreed, “as long as you pick the right species.”

“Oystercatchers need a lot of space,” he explained. “They’re spread out, they’re crossing all kinds of coastal habitats. So you really need a comprehensive management approach.”

“Most shorebirds are these little brown birds that are hard to see,” Schulte said. “When people see oystercatchers, they don’t forget them. They’re a good flagship species; they’re a great bird for outreach.”

The new business plan also could leverage the baseline research already done on the oystercatcher, a key component for meaningful assessments as the project unfolded.

Since 2001, a coalition of government agencies, conservation groups and scientists had been studying the oystercatcher’s predicament. In the years leading up to the development of NFWF’s business plan, the American Oystercatcher Working Group instituted a standardized banding protocol and continued to break new ground with migration studies.

NFWF’s business-plan approach hinged on expanding the scope of work being done by this group and others, while also sharpening its focus.

“By bringing together the people and expertise to deal with a species that moves up and down the seaboard, we started to lay the foundation for more effective conservation measures,” Davidson said.

Why a business plan?

Turning a species away from extinction requires an immense commitment of money, time and energy.

Working with funding partners, NFWF planned to invest $5 million over the program’s 10-year duration. A highly competitive grant process also allowed NFWF and its partners to marshal another $4.2 million in local contributions, getting the most bang for every buck spent on oystercatchers.

“Having that plan allowed our partners — our land managers and organizations — to go back to their funders and say: This is what the entire East Coast is doing, and we don’t want to be left behind,” Schulte said. “It spelled out what we were going to do, and how we were going to do it.”

The competitive grant process at the heart of the business plan enabled the foundation to ensure that federal and corporate conservation dollars would support only the most effective projects, while the detailed plan would make sure efforts in the field remained aligned.

The plan’s focus on measurable outcomes meant project leaders could track individual investments and their impacts on reproductive success at local levels. Constant analysis meant effective tactics could be replicated, and pitfalls avoided, up and down the coast.

And though these ongoing efforts focus on one key species, ancillary benefits abound. At least 17 species of birds are directly affected by the oystercatcher work, Schulte said, including the piping plover, Wilson’s plover, dunlin, red knot and other species nesting or stopping over in the focus areas.

“We see all these smaller birds tucked right in with them,” Schulte said. “They’ll be right underneath them, using them for shelter or for protection. Oystercatchers are pretty good at spotting eagles and other predators, too. They’re usually the first to jump.”

For the past six or so years, Schulte and other project leaders have been working with an array of organizations to put NFWF’s business plan in action in small towns, big cities and remote barrier islands from Maine to the Gulf coast of Florida.

Biologists and volunteers raise nests that could be lost to swollen tides, restore beach habitats damaged by storms and reestablish oyster beds near oystercatcher hot spots.

They also install fencing and keep a keen eye on predators at high-density nesting sites, where just a few smart foxes or raccoons can decimate an entire generation of oystercatchers.

On one barrier island in Virginia, biologists determined that more than 80 pairs of oystercatchers experienced near total breeding failure in one year due to a single red fox.

“Based on evidence in the field, we determined that this one animal was wiping out almost every oystercatcher nest in its path,” said Alexandra Wilke, a shorebird biologist with The Nature Conservancy in Virginia.  “Oystercatchers typically have very high productivity at this site when ground predators, particularly fox, are removed, and this year showed us just how devastating even one animal can be to an important nesting area.”

Sure enough, after the fox was removed, more than 90 pairs of oystercatchers produced 90 young the following year.

To mitigate the negative effects of human disturbance, program leaders in Virginia and elsewhere worked with government agencies to manage human access and curtail certain activities at key nesting sites — a ticklish process considering these sites are often the same sandy shorelines boaters and beachgoers flock to every summer.

“Millions of people want to use these places, and they’re the only places these birds have to nest,” Schulte said. “Generally, oystercatchers start laying eggs in March or early April and finish fledging by August. That’s dead-center in the recreational time frame.”

By linking projects in various states under one plan, the group has learned some of the best ways to approach potentially controversial restrictions: How much area of a beach to place off limits, when restrictions should apply, and how the measures are explained to the public.

“That kind of fine-tuning is one of the areas we’ve been really diving into,” Schulte said. “I think it’s one of the biggest keys to success.”

More than 500 volunteers support that mission by installing signs at restricted areas and keeping watch at nesting sites. They also help educate boaters and beachgoers to the oystercatcher’s plight.

“That’s the major challenge with all this,” Schulte said. “To find a sustainable way to manage and conserve species over the long term. It’s not just going to be putting signs up and closing an area.

“It’s important to have someone there, whenever possible, to talk to people, to explain what’s going on. It’s about building a connection to that place, trying to build partnerships, getting people engaged.

“Hopefully, they’ll have a sense of pride knowing that they have this unusual species there, and they’ll want to protect it, not just think of it as something that’s getting in the way.”