A phenomenal discovery, bringing a glimmer of hope to a declining species of bird

It’s not every day that someone discovers a new-to-science bird migration spectacle. It’s even more unexpected that such an encounter – in this case, tens of thousands of Whimbrel gathering during their annual journey north – would be just a stone’s throw from a metropolitan area.

Deveaux Bank is a small, horseshoe-shaped island located at the mouth of the North Edisto River in Charleston County, South Carolina. Scientists have long been aware that it is an important place for birds. The island hosts a huge colony of pelicans that nest there, significant numbers of American Oystercatchers, and many other shorebirds and seabirds. But, what South Carolina Department of Natural Resources (SCDNR) biologist Felicia Sanders and a team of researchers, including Abby Sterling, Director of Manomet’s Georgia Bight Shorebird Conservation Initiative, confirmed in May 2019 was truly surprising.

After spending three evenings counting on the island, Sanders and the team confirmed that approximately 20,000 Whimbrel were roosting at night on Deveaux Bank during their spring migration. The team documented similar numbers again in 2020. This single flock includes nearly half of the declining shorebird’s estimated eastern population: a staggering spectacle hiding in plain sight. The findings were recently published in the peer-reviewed scientific journal Wader Study and The New York Times.

“Felicia has been working hard for a long time to protect this island for the many birds that use it as critical habitat,” says Abby. “In 2014, she happened to be on the island at a different time of day than usual and noticed flocks and flocks of Whimbrel — it was totally unexpected. In 2019, I participated in a coordinated count. We sat at staggered spots on this horseshoe-shaped island, recording all the Whimbrel that landed. Afterwards, we called out the counts from our data notebooks to Felicia and she tallied it all up. And we had this mind-blowing number of Whimbrel. This was, I think, the first real systematic count of Whimbrel on Deveaux.”

“A lot of people were skeptical, but after tallying results from coordinated surveys by fellow ornithologists and video documentation, we are certain of the magnitude of the flock,” said Sanders. “Finding so many Whimbrel here gives me hope that we can turn the tide for this and other declining shorebird species.”

“These chance discoveries can lead to a long-term understanding of how a species uses the landscape,” says Brad Winn, Manomet’s Vice President of Resilient Habitats. “Whimbrel have similar daily patterns at all of their roost sites on the Atlantic and Gulf Coasts, but none we have found so far support as many birds as Deveaux. Often, these large, brown shorebirds are seen alone during the day after dispersing widely from their night roosts to feed on favorite prey like fiddler crabs and crawfish. They frequently maintain daytime feeding territories, and so even if someone is looking hard, they might only see a dozen in the course of the day. But in the evening, when a lot of people aren’t looking, these birds come out of their feeding areas to pre-roost loafing sites on the coast.”

The work on Deveaux Bank is now shifting from just reconfirming the number of Whimbrel, to studying the daily habitat needs of individual birds away from the roost. This work is led by Maina Handmaker, formerly of Manomet’s shorebird conservation team, and now earning her master’s degree under the direction of Dr. Nathan Senner at the University of South Carolina. Not only will it help shine a light on the movement of birds in South Carolina, but it will also provide detailed information about their annual migration journeys.

“Working with Manomet and WHSRN quite literally paved the way for the research I am doing now,” says Handmaker. “One of the biggest privileges during my time as the WHSRN Communications Specialist was the opportunity to connect with site partners across the hemisphere to learn about their inspiring shorebird science and conservation work. One of those partners was Felicia Sanders, the groundbreaking South Carolina shorebird biologist that discovered the Whimbrel roost at Deveaux Bank. It was also through Manomet that I first learned of Dr. Nathan Senner’s work studying long-distance migratory shorebirds, and ultimately reached out to him to ask him if he would consider taking me on as a graduate student. Before long, the three of us were writing grants together to try to bring the Deveaux Whimbrel project to life.”

Shorebirds today, including Whimbrel, face many complex threats, including coastal development, habitat loss, impacts from human disturbance, pressure from hunting, and polluted coastal areas, particularly the impacts of coastal oil spills. The Whimbrel (Numenius phaeopus), is one of two surviving curlew species found in North America. The other is the Long-billed Curlew, primarily found in western grasslands and prairies. Unfortunately, curlews worldwide are not faring well, including the Eskimo Curlew that was commercially hunted into extinction early in the last century in the United States. “Shorebirds travel tremendous distances, facing a myriad of threats along the way,” says Sterling. “When we think back to the tragic tale of the Eskimo Curlew, we can’t help but think, ‘We should have known better’.”

Deveaux Bank is a state-designated seabird sanctuary, with restrictions for recreationalists and dogs. But it is also a very popular destination for boaters, and during busy summer weekends it’s not uncommon to see hundreds of boats anchored off the two ends of the island that remain open. For the birds that rely on Deveaux, including Whimbrel, it’s imperative that they are able to find the quiet, safe places that allow them to nest and roost. “One hope that all these partners have is that this discovery builds pride within the local communities, and helps generate awareness so that people can give birds the space they need at Deveaux,” says Sterling. 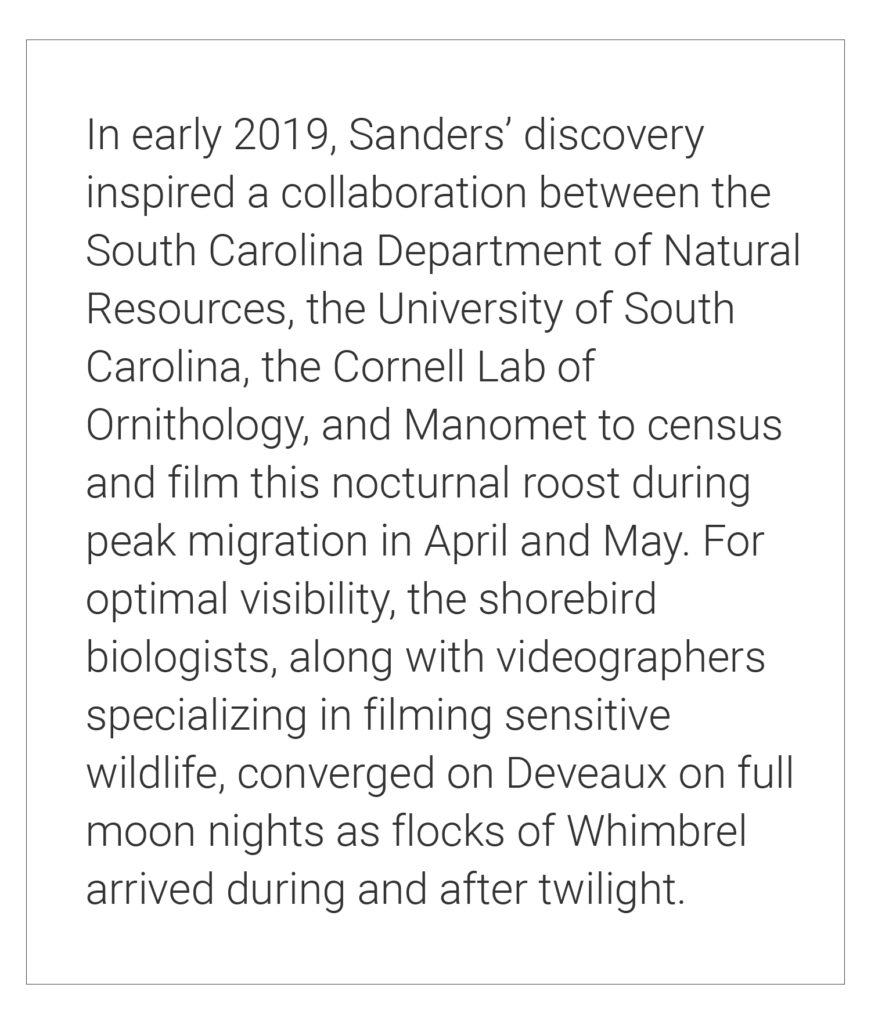 “Whimbrel are skittish, and if there are people visiting at night when they are coming in to land, they will not roost there, and we know that this place is critical for them.”

We are working hard to prevent Whimbrel from meeting the fate of the Eskimo Curlew. Manomet is studying Whimbrel habitat use and migration pathways at a broad scale across the hemisphere to help understand where and when conservation actions are most needed. Working closely with many partners, particularly the Center for Conservation Biology at William and Mary and the Georgia Department of Natural Resources, Manomet scientists have spent the last decade identifying the full life-cycle migration patterns for these amazing shorebirds. We are establishing a monitoring network of professional and volunteer observers in North and South America to help identify, maintain, and protect the habitat that Whimbrel need to survive. Focal areas for Manomet’s Whimbrel research include Massachusetts, Georgia, Louisiana, and Texas.

“This spectacular event at Deveaux is becoming rarer in our world of declining biodiversity,” says Winn. “Many shorebird species have declined dramatically in recent decades, so these moments of abundance need to be fully appreciated and embraced by all of us. We have a chance with this species to treat it right, so that’s why seeing this number of Whimbrel in one place is just so mind-blowing and emotional — it takes us back to another time.”

Read More From Our June 2021 Newsletter