Connecting Art to Science: A lens on shorebird conservation - Manomet

Connecting Art to Science: A lens on shorebird conservation

Thank you for joining us in Concord for our event, “Connecting Science to Art: A Lens on Shorebird Conservation.” We are pleased to be able to offer you an extended opportunity to purchase the photos that were on display that evening. This is a rare chance to purchase the beautiful photographs taken by our scientists Brad Winn, Shiloh Schulte, and Alan Kneidel and
to directly support the work of Manomet’s Shorebird Recovery Program.

Orders will only be accepted through Wednesday, November 27, and finished prints will be available for pickup at our printing partner, Pitch Black Editions in Concord, the second week of December. You may also arrange for shipping if you’d prefer. You will receive an email once your order is ready.

Below you can view the photos that were available that evening with a description of the image and the story behind it. Following the photos is the order form. If you have any questions or if you would like to order multiple prints, please contact Justin Barrett at jbarrett@manomet.org.

A stunning bird of the Patagonian Steppe grasslands, this particular bird was on the uplands along the southern Argentinian coast of Rio Gallegos. Based on its lack of flight behavior, it may have been nesting nearby, and allowed me to approach fairly closely in the morning sun for this photograph. 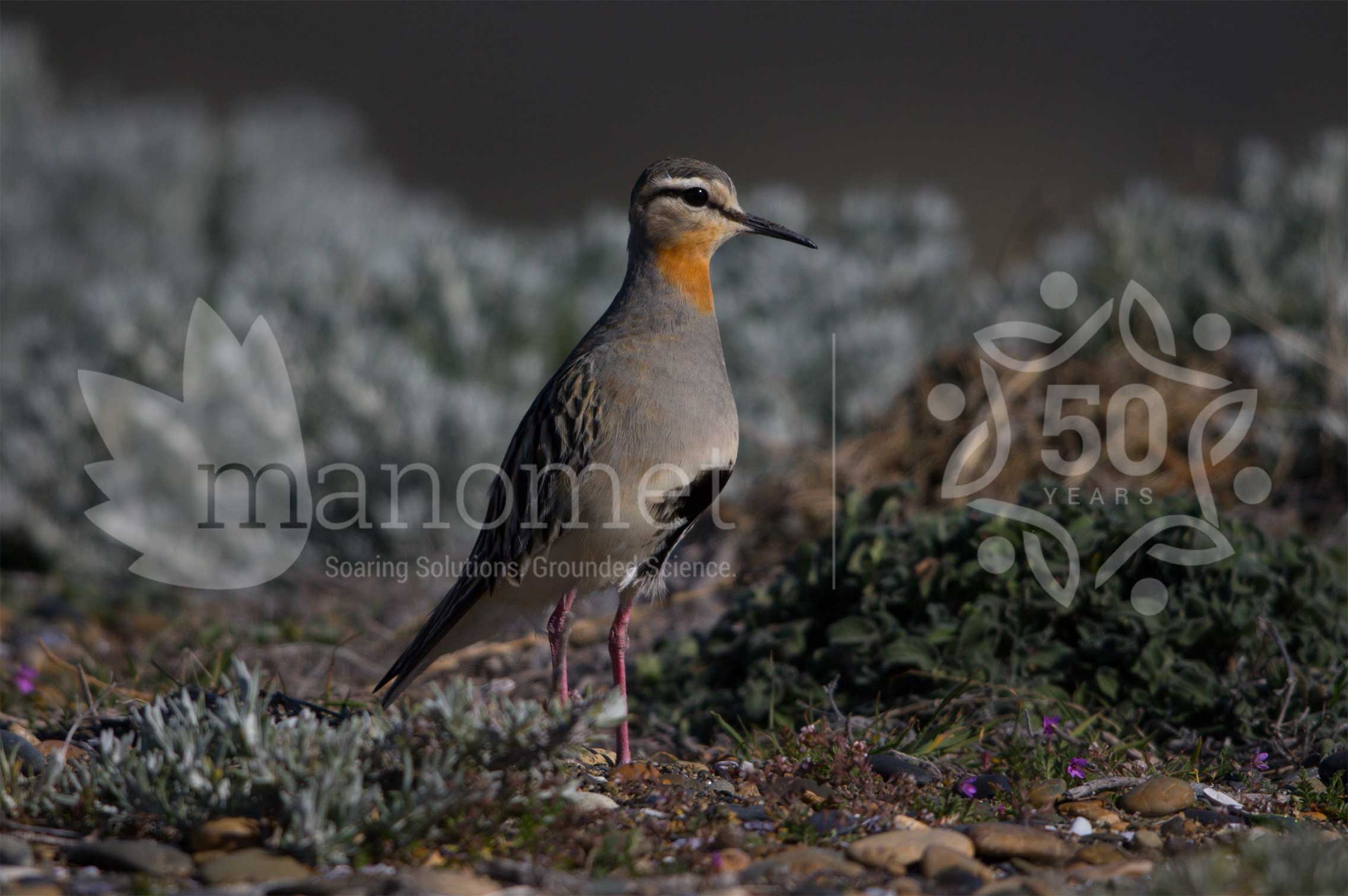 Whimbrel breed in the Arctic and sub-Arctic tundra and some migrate south to Massachusetts from July to October. While here, Whimbrels gorge on fiddler crabs which will help fuel their subsequent non-stop flight to their coastal wintering grounds in the Caribbean and South America. Currently identified as a conservation priority in the Atlantic flyway, Manomet is working with partners throughout their range to gain knowledge and help recover the species. This individual was photographed over the productive saltmarshes of Wellfleet in September 2019. 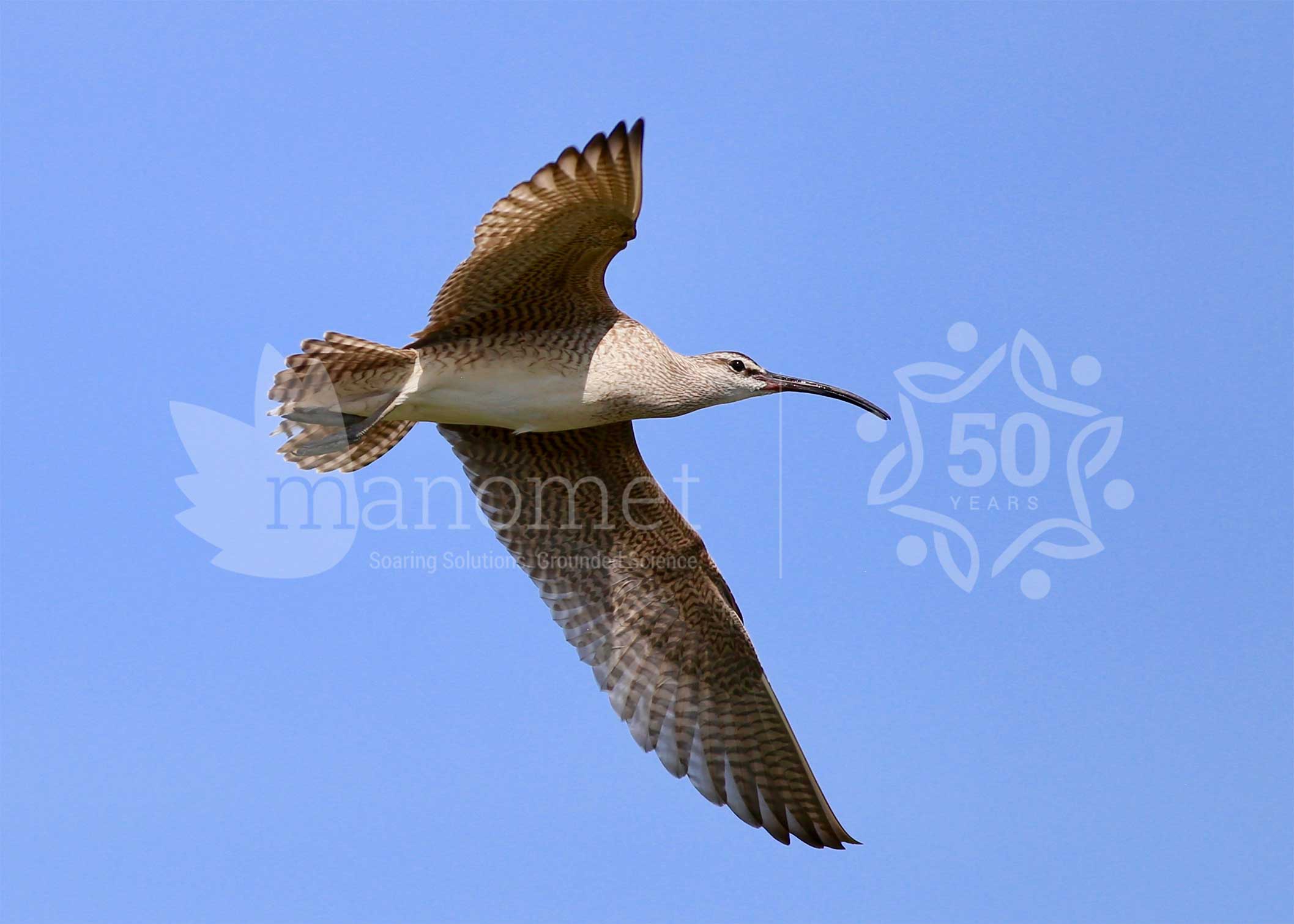 Silhouetted against the late July setting sun, this flock of adult Whimbrels was about to land on the Monomoy National Wildlife Refuge in Chatham, Massachusetts. After a full day of eating fiddler crabs, more than 200 came in from the saltmarshes of the outer Cape to roost for the night. In transit from their sub-Arctic breeding grounds, these birds stop to refuel in eastern Massachusetts for several weeks before flying out over the Atlantic to their tropical wintering sites. 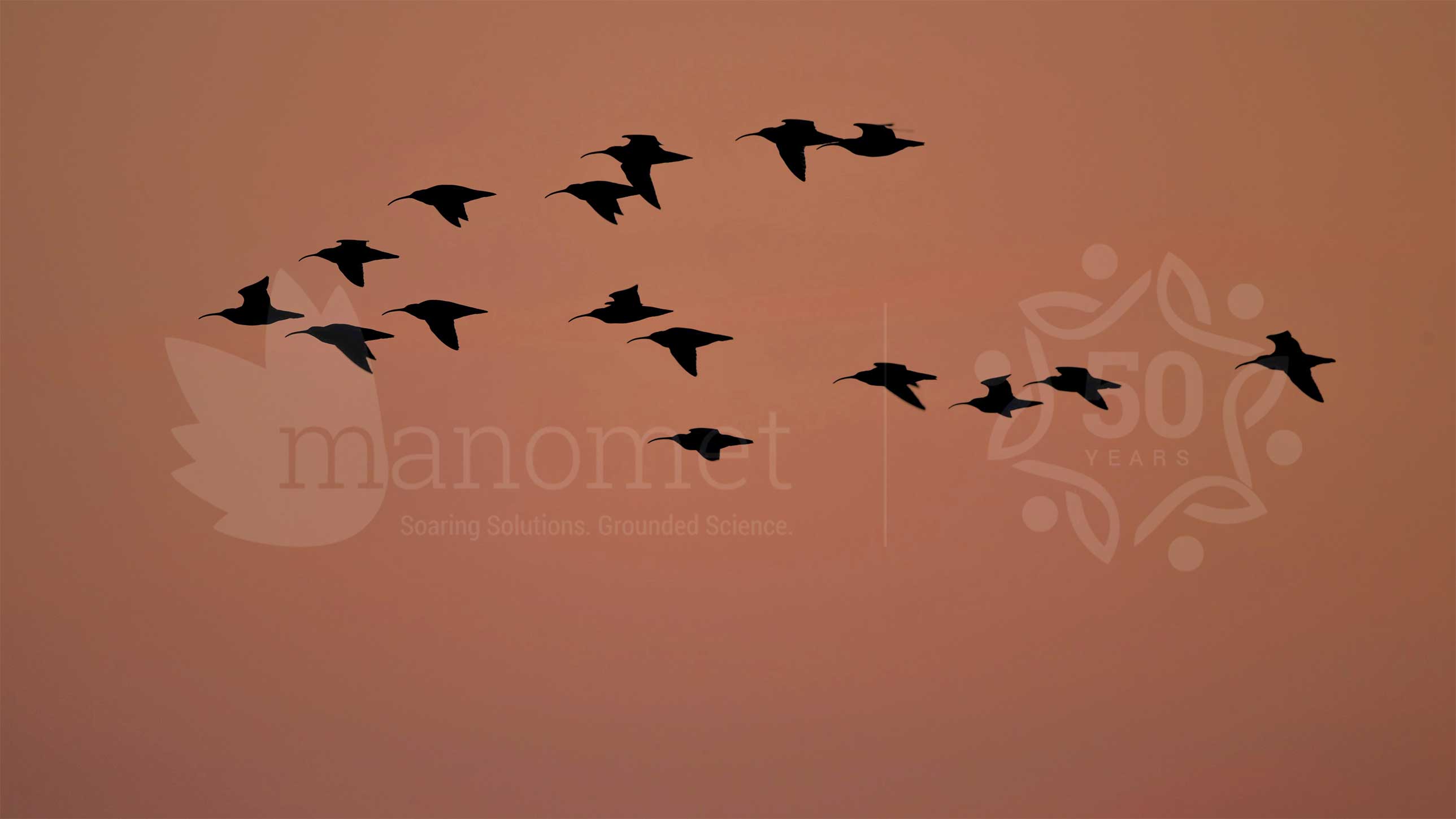 This American Golden-Plover nested near our field camp in the Arctic National Wildlife Refuge. The Refuge is home to millions of nesting birds every summer representing four flyways and wintering sites from Australia to Tierra del Fuego. 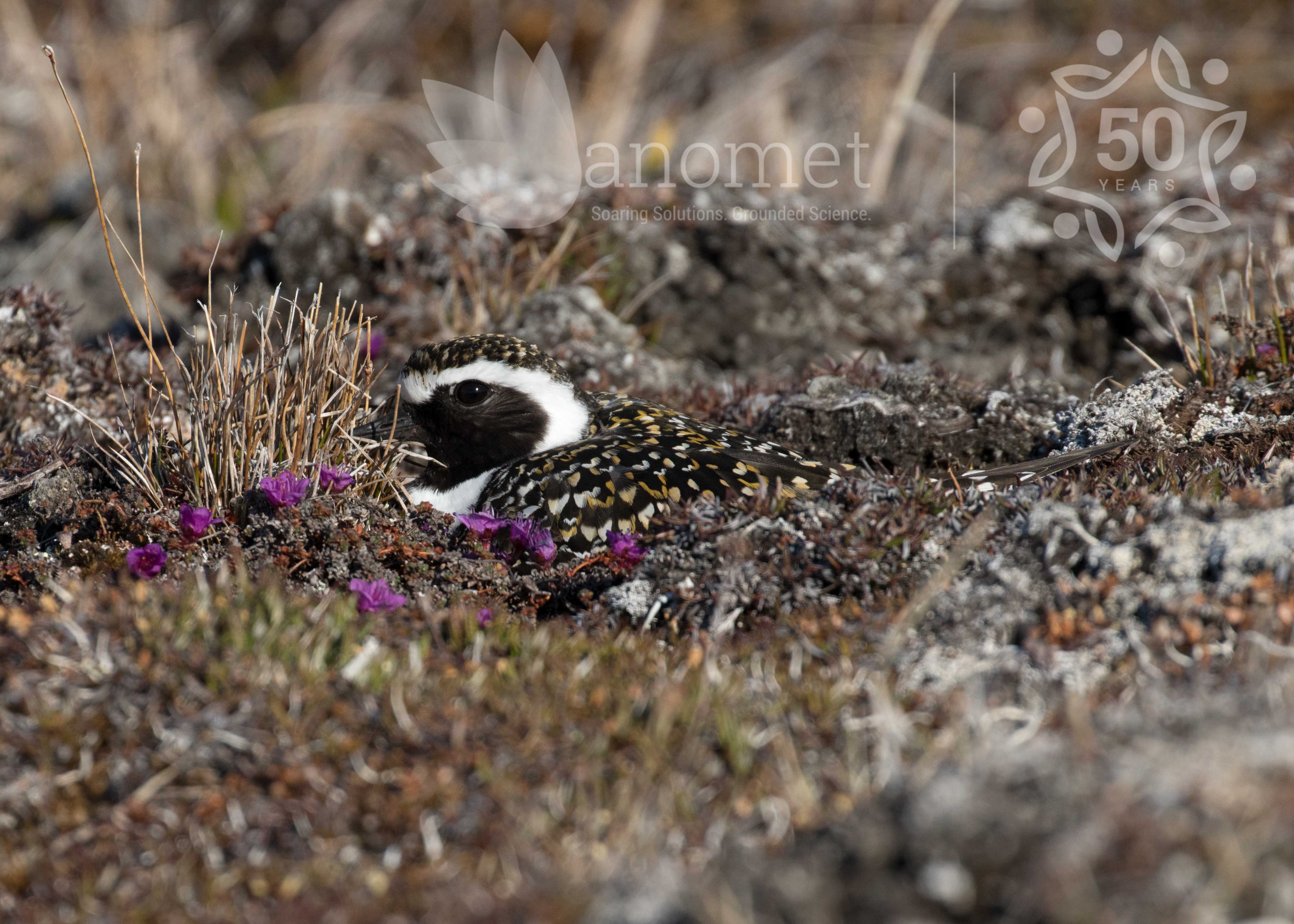 American Oystercatchers nest on coastal beaches and islands along the Atlantic coast. I took this photo to document eye characteristics while banding this bird as part of a large-scale study of behavior and survival designed to improve our conservation of the species. 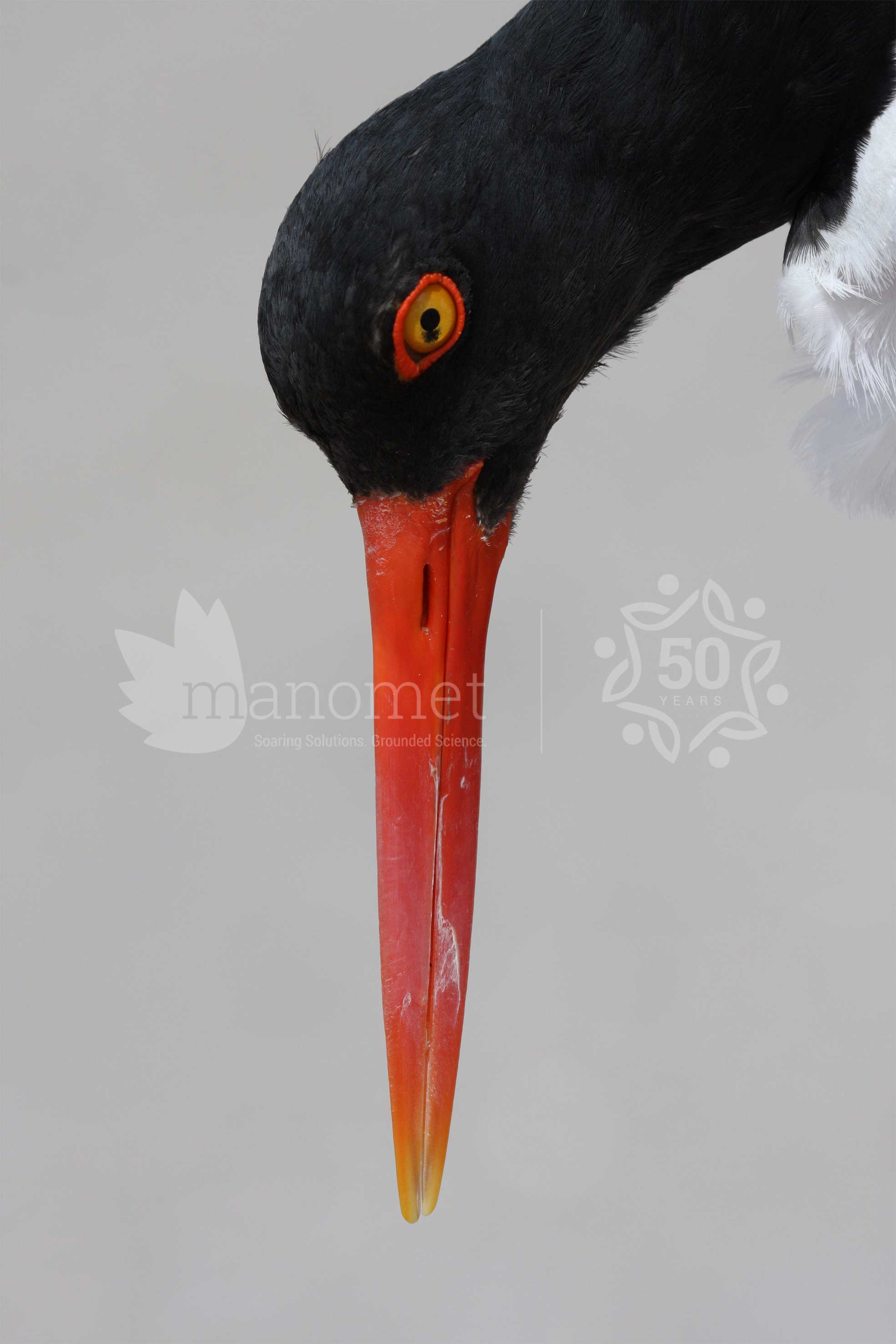 The Texas coast is an important region for shorebirds, particularly in the spring. This Black-necked Stilt shares the shallow water around Corpus Christi Bay with thousands of shorebirds. 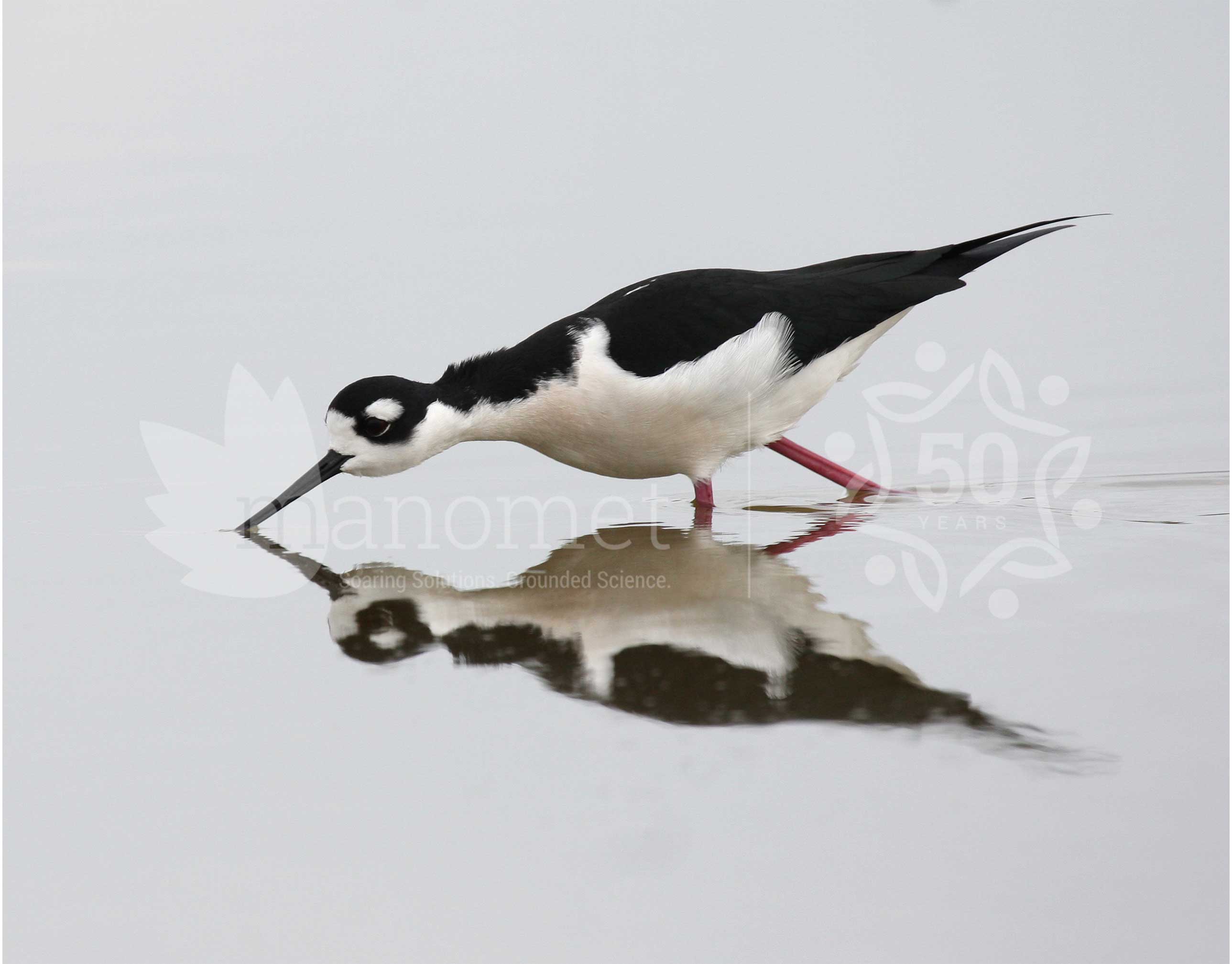 Male Pectoral Sandpipers have a unique breeding display which involves inflating an air sac on their breast and flying across the tundra emitting low, booming sounds. These two males had to take a break from their displays to settle a territorial dispute, fighting aggressively and even coming to blows. This photo was taken in early June 2017, as the persistent snowpack finally began to recede from the Canning River Delta. 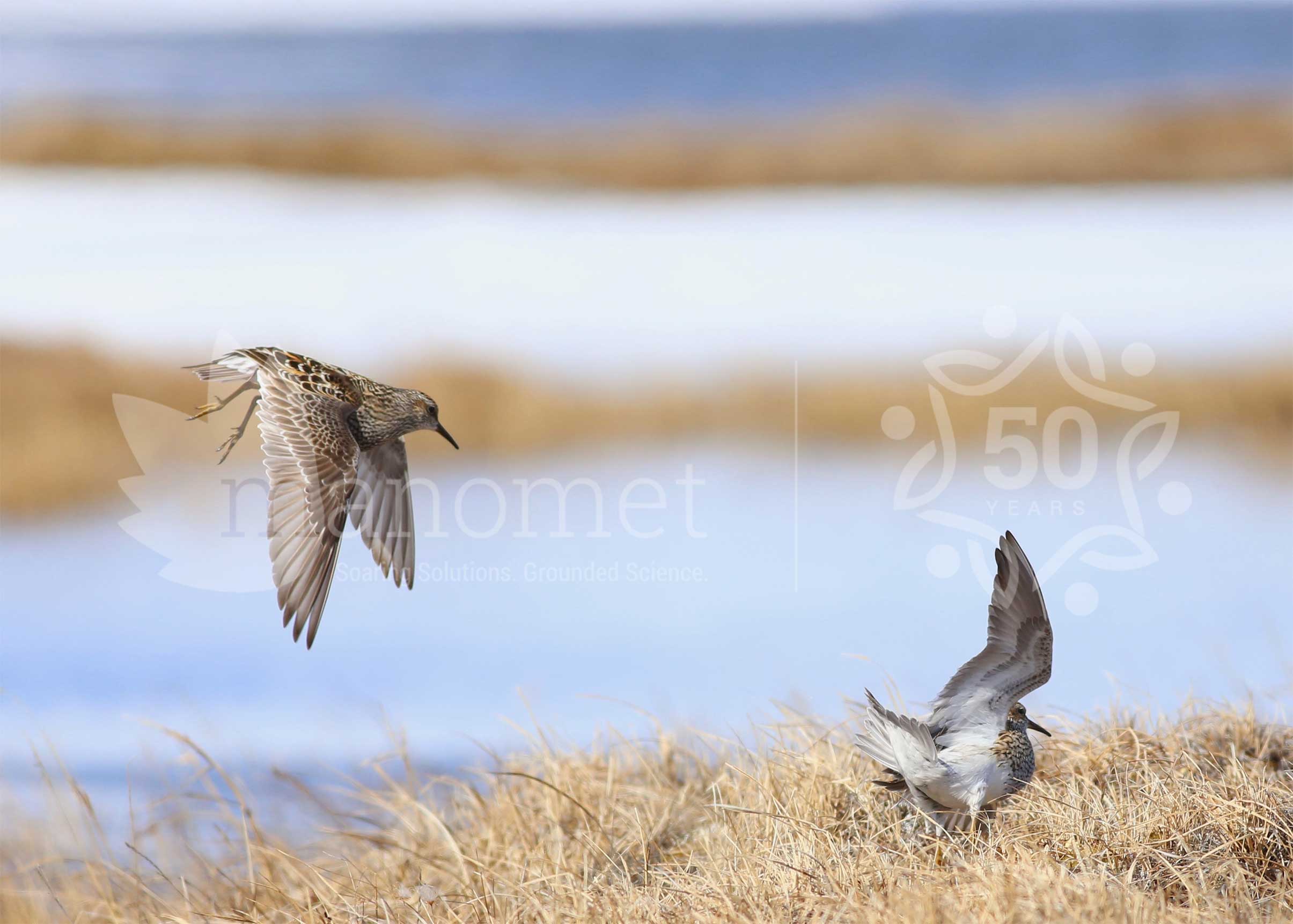 The remote barrier coasts of Georgia and South Carolina host large numbers of Red Knot as the birds migrate north in the spring. The birds fatten on horseshoe crab eggs and small clams from late April through May before flying directly to the eastern Canadian Arctic to nest. This knot was in a flock on the eastern sandbars of St. Catherine’s Island in early May, about thirty miles south of Savannah, Georgia. 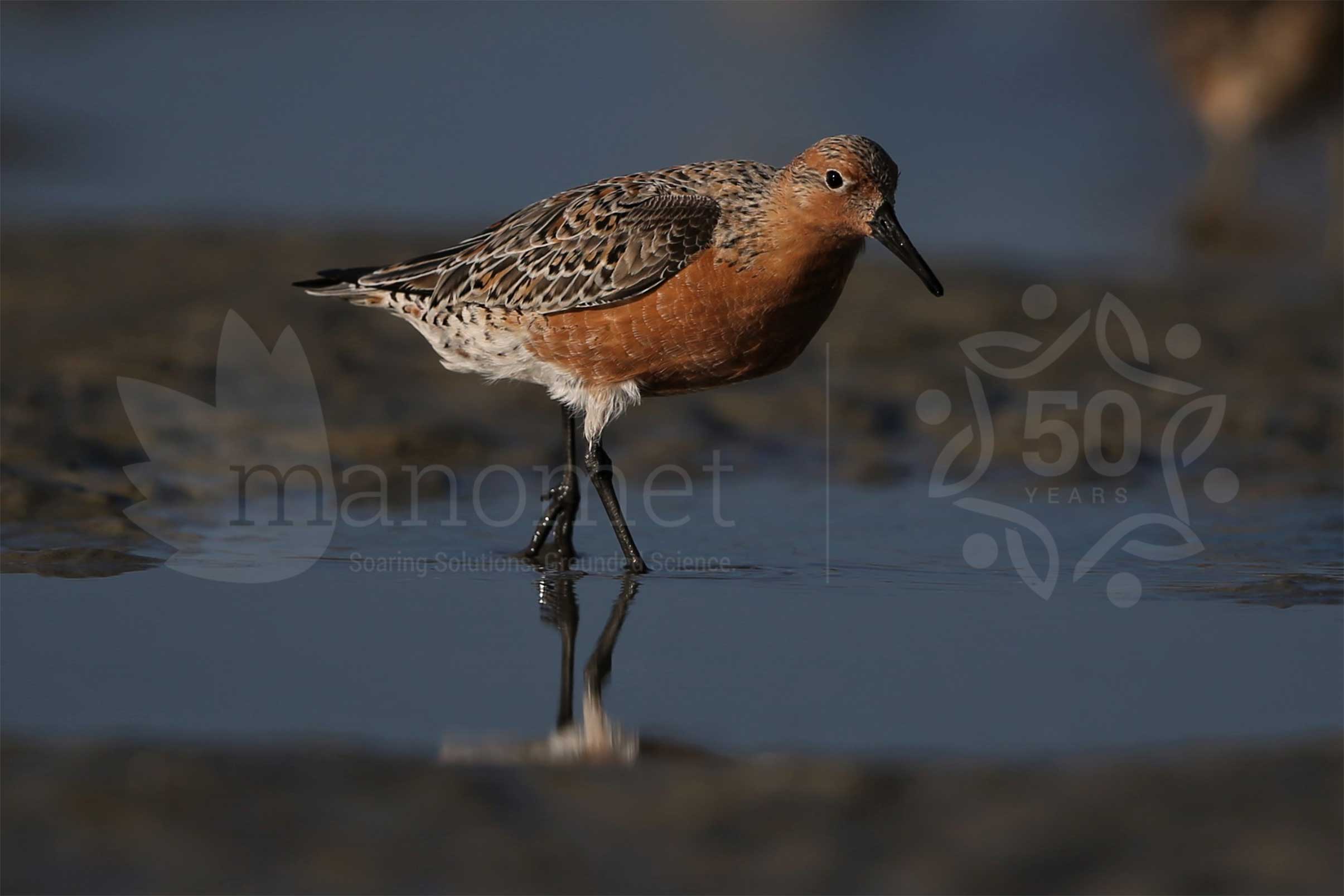 Male Red Knots take on chick-rearing duties after both males and females successfully incubate eggs to hatching. Female knots gather in flocks along Arctic coasts before migrating south several weeks before the males, and about six weeks before their own young migrate. This male had an orange band, indicating that it had been tagged in Argentina. The knot did not mind me, but was instead vigilantly looking for aerial predators like Parasitic Jaegers and Peregrine Falcons. 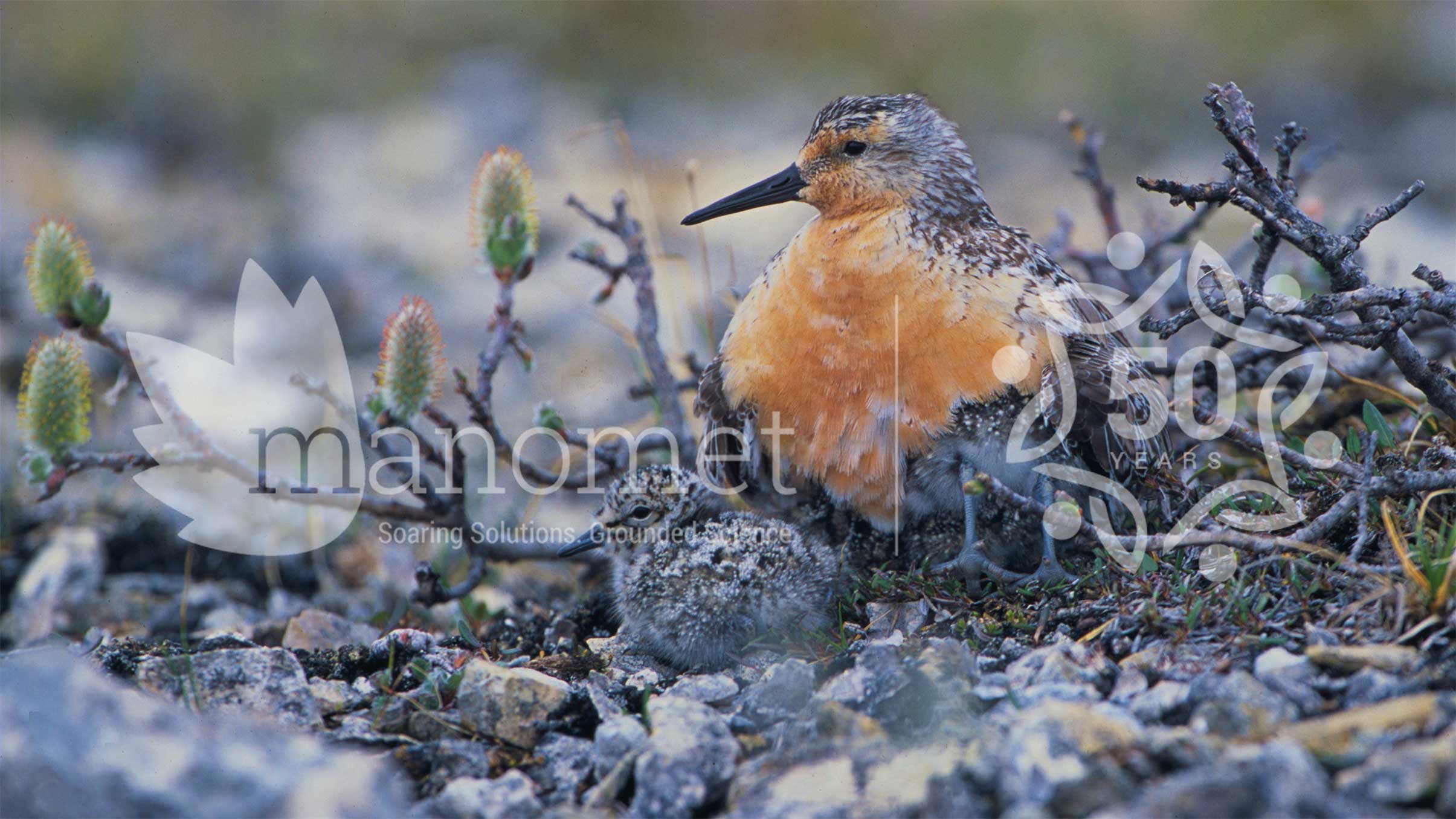 To most birders, Red Phalaropes are thought of as pelagic seabirds, seen as distant white specks on a roiling sea. Life on their breeding grounds, however, is quite different! Phalaropes represent one of the rare cases where males perform incubation duties, and are therefore duller than the females. This male flushed off a nest at the edge of a shallow wetland, showing off its expert swimming skills as it assessed me. 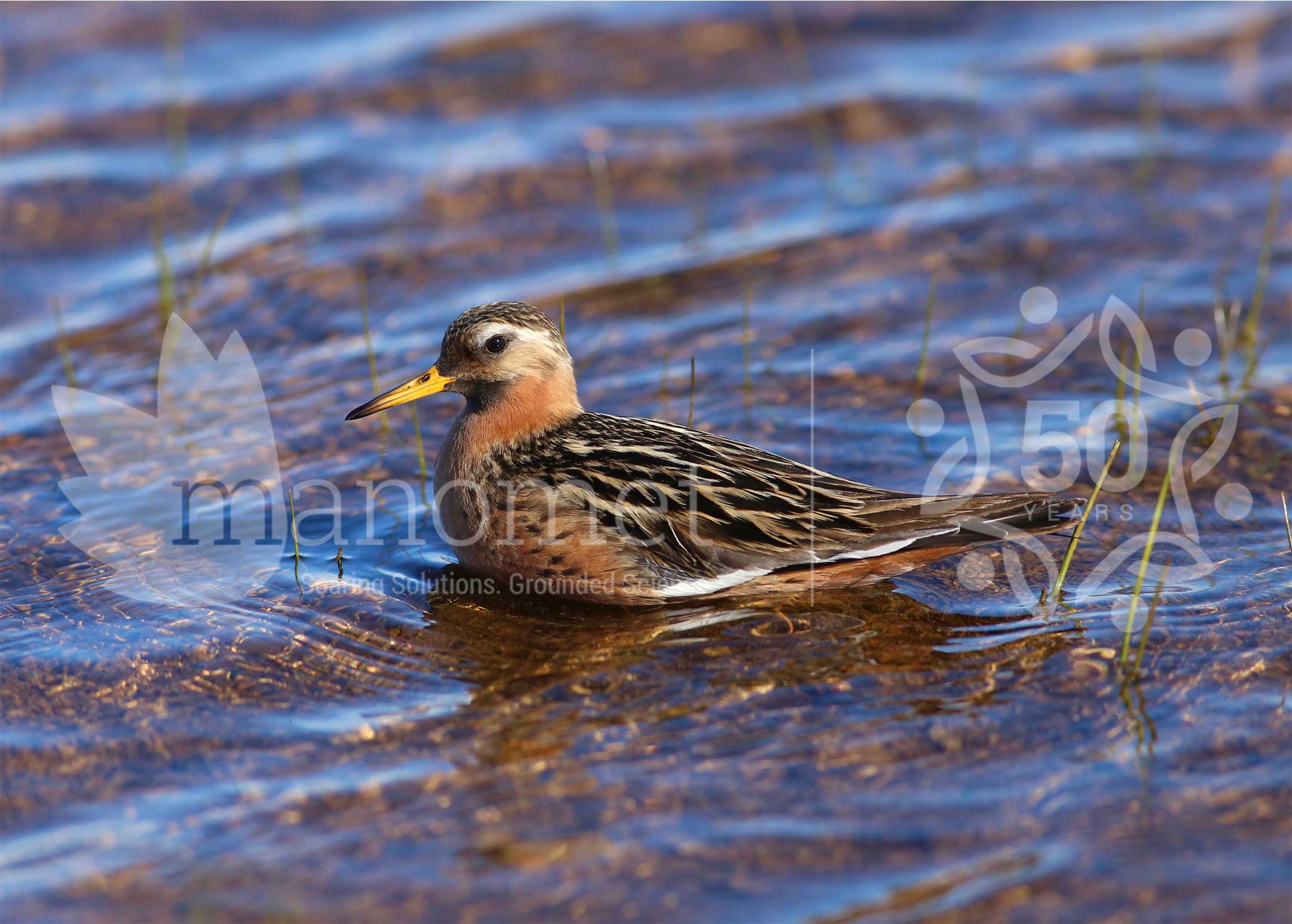 Late spring snowstorms are a risk for Arctic-nesting shorebirds. This female Red Phalarope had stored enough fat reserves to migrate to the Arctic, lay eggs, and still survive severe weather. 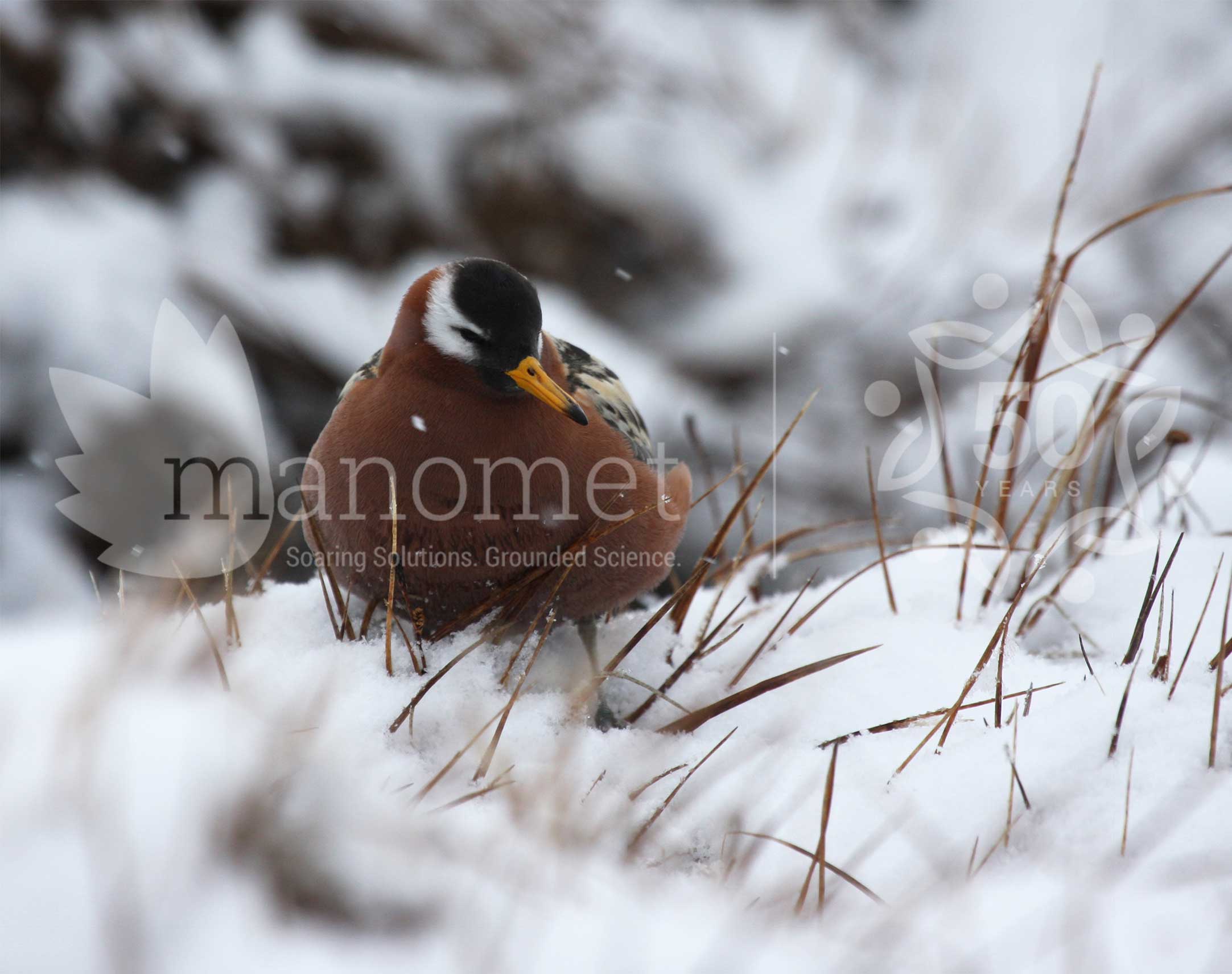 The Arctic-breeding Semipalmated Sandpiper has been a focal point of Manomet’s shorebird research in recent years, due in part to a precipitous population decline. This individual was one of several hundred feeding on the exposed tidal flats of Plymouth Harbor in Massachusetts in September 2018. Productive stopover sites such as this provide birds with the opportunity to replenish their energy reserves as they migrate southward to their tropical wintering grounds. 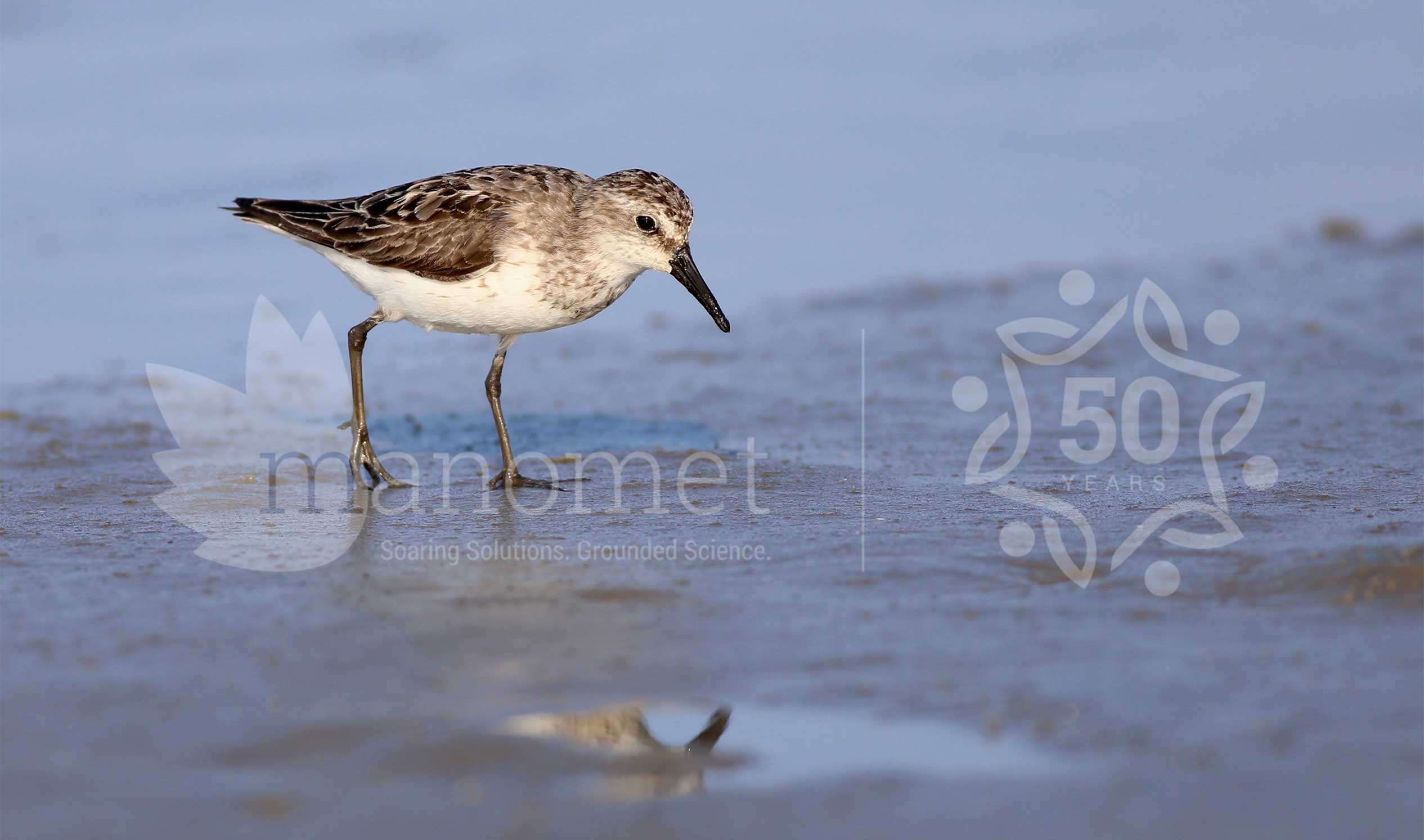 I took this photo of a singing male Semipalmated Sandpiper near midnight on Coats Island in Nunavut, Canada. Arctic breeding birds use all 24 hours of daylight during the short Arctic summer to establish breeding territories and raise their young. We were on the island to study the migration patterns of Semipalmated Sandpipers to understand why they are declining in the eastern Arctic. 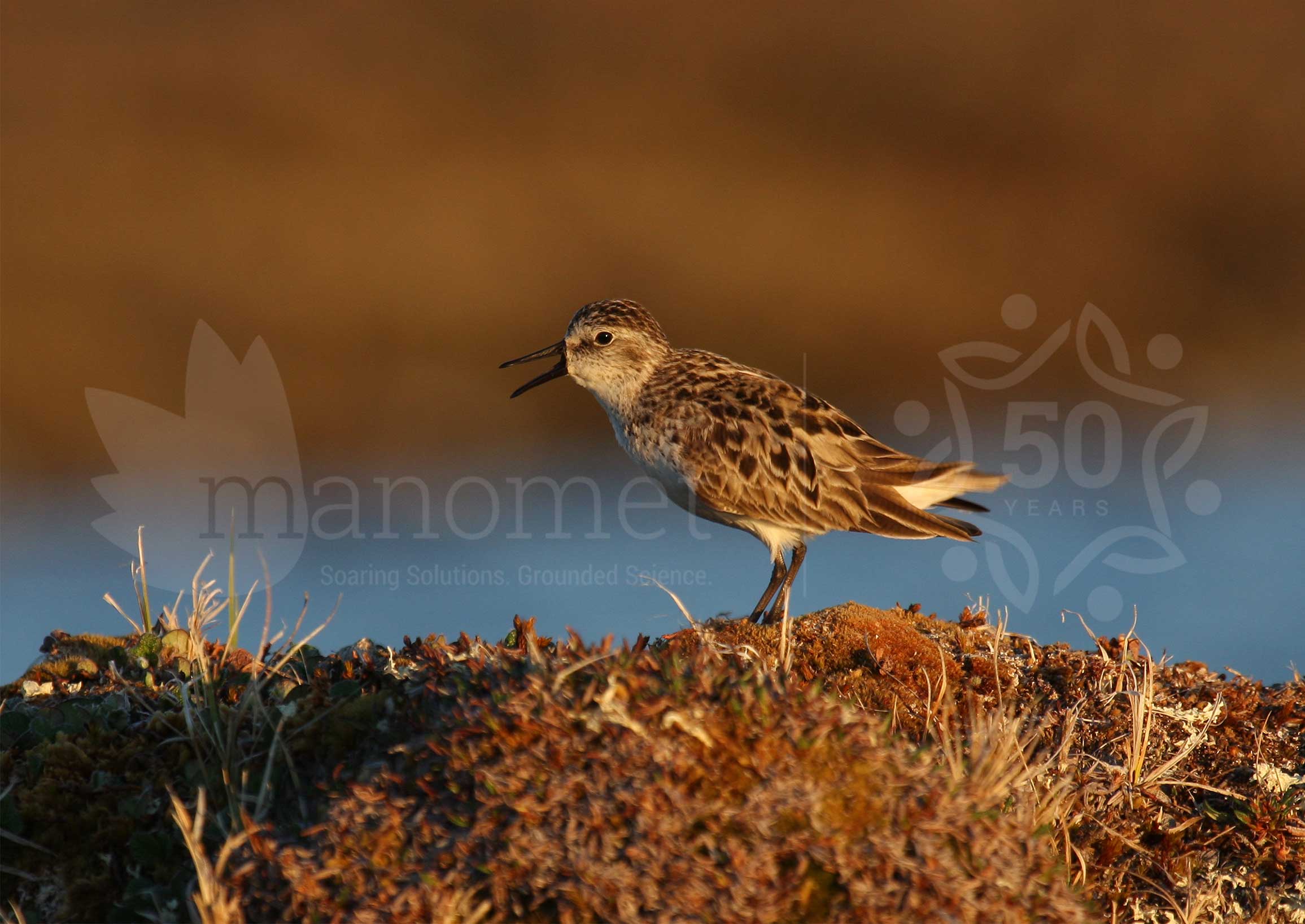 These birds were outside of the town of Punta Arenas at the edge of a Patagonian Steppe pond in Southern Chile. This species has a short migration from the coastal areas of southern Argentina and Chile where it spends the winter to interior nesting sites near freshwater grassland pools as far south as the southern tip of Tierra del Fuego. This is a very rare species with numbers estimated to be between 2,000-3,000 individuals only. 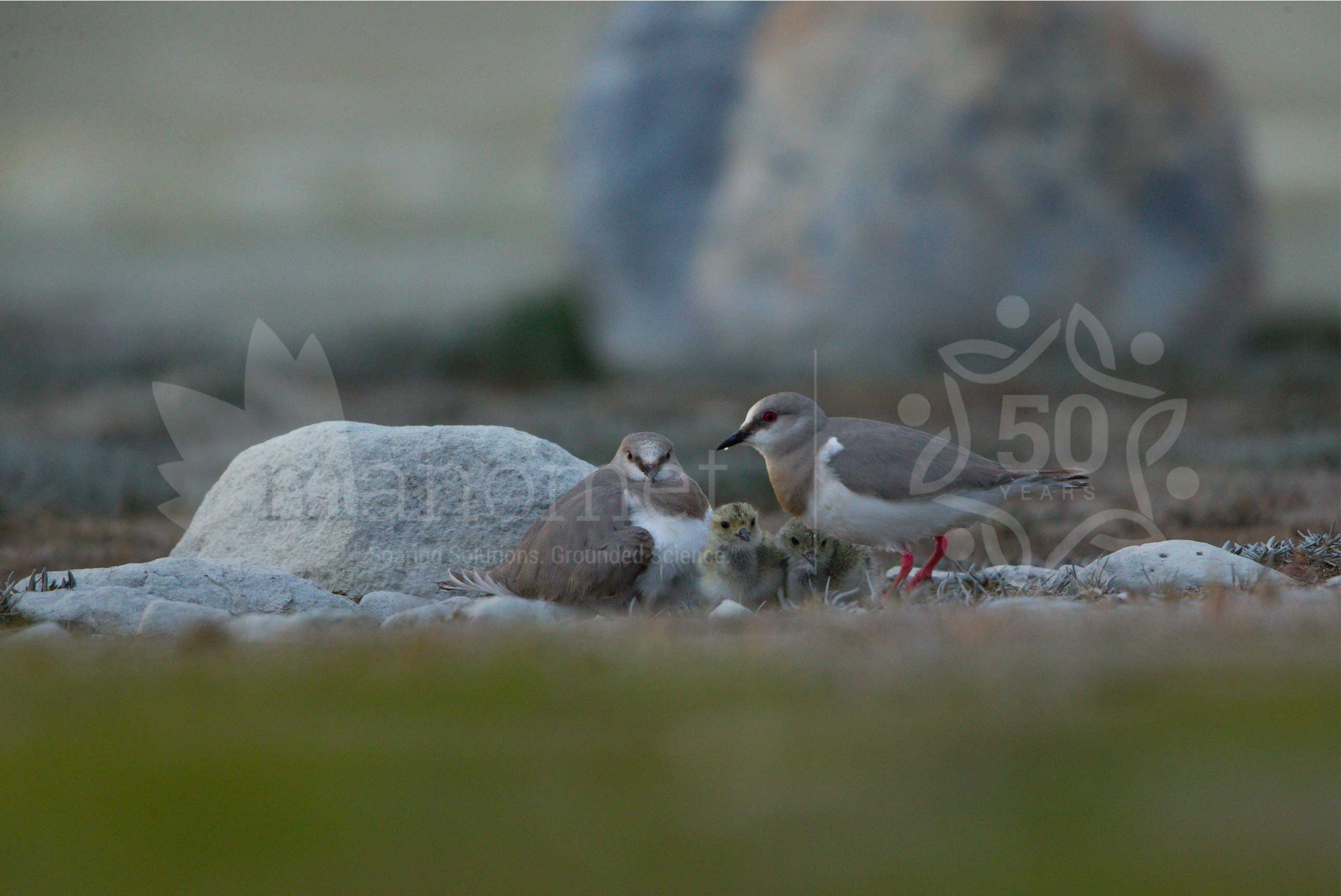 The aerial song of the Stilt Sandpiper is a familiar sound in the coastal wetlands of the Arctic National Wildlife Refuge. This adult spent an afternoon watching guard over four recently fledged young on the edge of our camp in early July 2017. At the first sign of a potential predator, the adult gave out a special warning call, alerting the young to crouch in the grass and remain motionless. 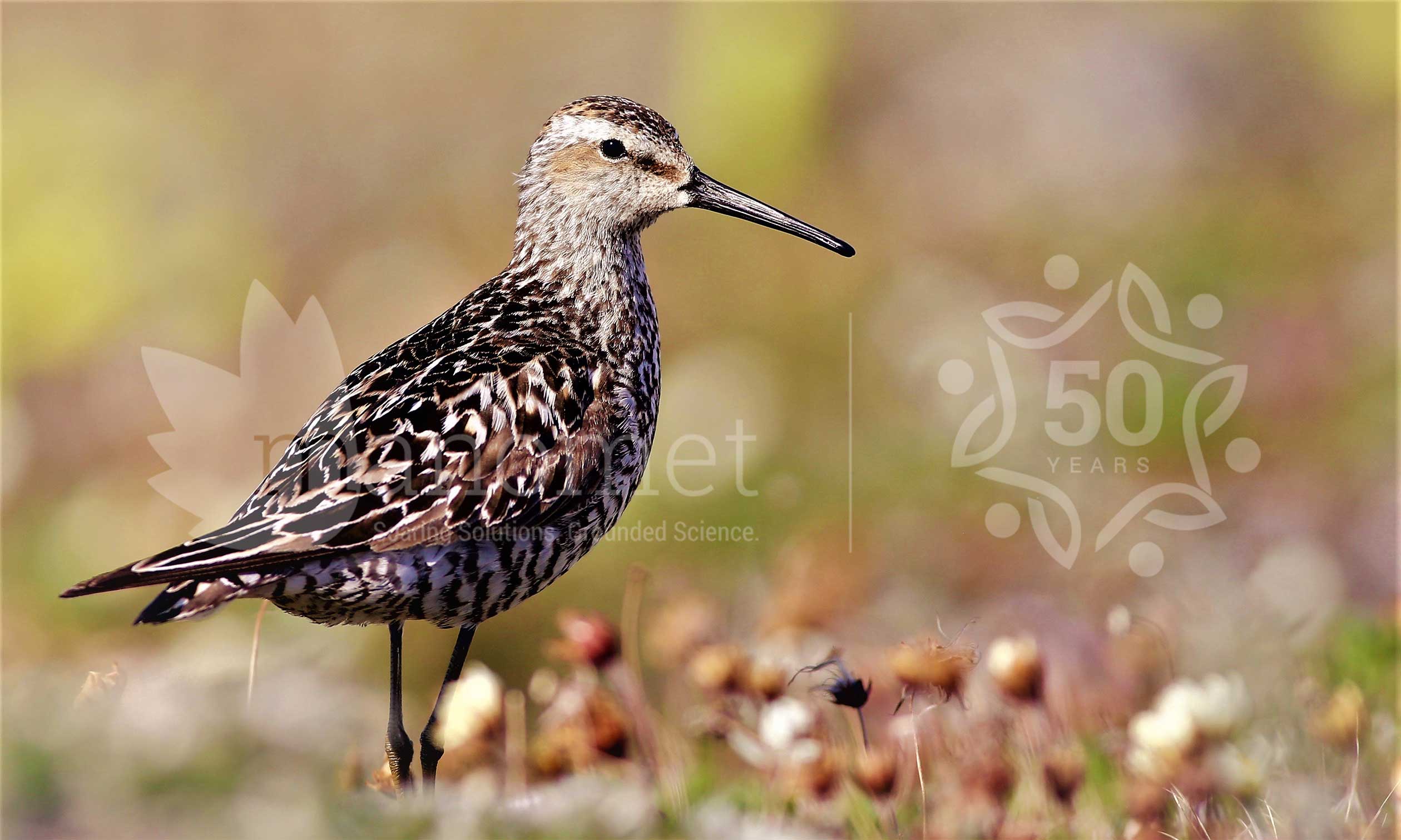 To place your order:

1. Select your print.
2. Scroll down and complete the billing information.
3. Click on the payment button.
4. Once your order is finalized, you’ll see a confirmation message and will receive an email. If you do not receive this email, contact Justin Barrett at jbarrett@manomet.org.