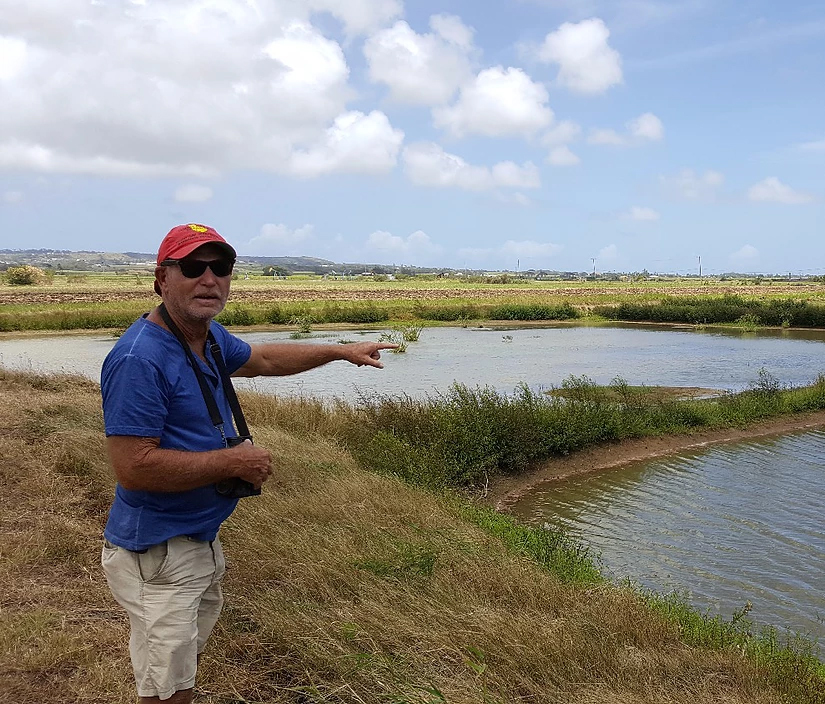 Wayne at the Woodburne Shorebird Refuge. Photo by Yves Aubrey.

On behalf of Manomet, which administers the WHSRN Executive Office, we are pleased to announce that the winner of the 2017 Pablo Canevari award is Wayne Burke!

Wayne is a Bajan shorebird conservationist and founder of the Barbados Shorebird Conservation Trust. He was selected from among several, highly qualified candidates that had been nominated for the 2017 award. The award was announced during the 7th Western Hemisphere Shorebird Group meeting in Paracas, Peru.

Wayne’s early life centered on the beach, where he learned about shorebirds from his father. After a varied career as a surfer, yachtsman and blacksmith, and a spell in Canada where he obtained a Master’s Degree in Geography, Wayne became the wetland manager and naturalist at the Graeme Hall Swamp. During this time he also led the identification of Important Bird Areas and wrote the Barbados chapter for the Caribbean IBA book.

In 2008, Wayne began working with BirdLife International to lead efforts with local hunters to address the unsustainable take of shorebirds on Barbados. His efforts have led to many favorable changes in the culture of hunting on the island, including the pro-active self-imposition of bag limits by hunters, and the creation of the Woodbourne Shorebird Refuge.

The hunting of migratory shorebirds on Barbados is a well-entrenched tradition dating back to the early colonial period. In a landscape now mainly devoid of natural wetlands, the artificially-maintained and managed network of shooting swamps provides important habitat for many shorebirds and other waterbird species. The swamps exist solely as a result of shooting-specific management actions.

Wayne has worked closely with the Barbados Wildfowlers Association, building a relationship of trust which has been the foundation for all the conservation achievements. An unprecedented release of harvest data, which were analyzed by the Canadian Wildlife Service, led to the Wildfowlers Association passing a series of resolutions to voluntarily regulate the hunt from 2012 onwards. Thanks to Wayne’s continuing engagement, several shooting swamps have placed further restrictions on hunting, and now celebrate World Shorebirds Day by having a no-shooting day. Foremost among these is the Congo Road Shooting Swamp, where hunting no longer occurs, but the area is still managed to provide habitat for shorebirds.

Many hunters and ex-hunters actively supported Wayne and the Shorebird Conservation Trust in the restoration and improvements at the Woodbourne Shorebird Refuge, a former shooting swamp now actively managed as a no-shooting refuge for shorebirds. Wayne lived for several years at the site, in what can be described, at best, as minimalistic conditions in the “Hutt” (named after Maurice Hutt, a lead local conservationist, who first raised international concern about the impact of the Barbados hunt on shorebird populations).

The many favorable changes in the shorebird hunting culture on Barbados are primarily thanks to Wayne’s extraordinary personal and professional commitment, dedication and passion. These are the same values that Pablo Canevari brought to shorebird conservation in the Americas. Pablo was Manomet’s first director of the WHSRN Executive Office. Born in Argentina, Pablo was a beloved colleague, scientist, illustrator, and a dear friend to all who knew him. He passed away suddenly in 2000, and Manomet created an award in his honor that year to recognize and support the work of an individual, organization, or company from Latin America or the Caribbean that exemplifies Pablo’s approach to shorebird conservation.

“I am deeply honored and humbled to receive the Pablo Canevari award. This season has been one of extreme tension in the Atlantic Flyway, with the number of tropical storms and hurricanes posing extreme havoc for both migrating shorebirds and human residents of the Caribbean islands” commented Wayne. “Never has it been more important to work together to conserve the habitats that the shorebirds depend upon, and which help maintain the resilience of the islands to extreme climatic events.”

Many thanks to David Wege (BirdLife International), who nominated Wayne.