Wallowing About in Search of Shorebirds 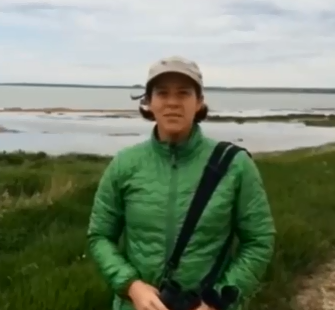 Thirty to sixty million big and shaggy American bison (Bison bison) once roamed North America’s Great Plains (USFWS). This enormous number of bison moved across the landscape, eating grasses, trampling and fertilizing the prairie, and pawing at and rolling about in the dirt. The latter behavior resulted in shallow depressions called bison wallows.

Bison shaped their landscape by creating a patchwork of short grasses where the herd grazed, taller grasses where they hadn’t grazed, and disturbed, shallow depressions where bison wallowed the prairie to dust themselves for insect control. This process of altering the landscape’s surface through their activities means that bison were keystone species, supporting a greater variety of plants and wildlife through their grazing and wallowing behavior (Knapp et al. 1999). In terms of impact, one estimate suggests there may have been five or more bison wallows per acre (NPS). While bison wallows are not evenly distributed across the landscape, it is clear that bison were a major influence in the prairies.

Today, only small remnant herds of bison exist in the Flint Hills, mostly on privately owned ranches. On the Konza Prairie Biological Station, a tallgrass prairie preserve in northeastern Kansas where the ecological role of bison is actively being studied, managers observe more than one wallow per acre and about 11 wallows per bison (E. Horne, pers com). But elsewhere in the Flint Hills, many thousands of relic bison wallows continue to dot the landscape, even in areas where there have been no bison for more than 150 years. Areas where bison are actively working wallows have less vegetation and more mud, which provides different habitat than the more vegetated, historic, bison wallows. Both historic and active wallows fill with spring rains (Gerlanc and Kaufman 2003), creating shallow ephemeral wetlands, some that provide ideal stopover sites for certain shorebirds as they head north to breeding grounds.

A Mourning Dove in a bison wallow. Photo credit: The Nature Conservancy in Kansas.

A calf bison takes a break in a bison wallow. Photo credit: The Nature Conservancy in Kansas.

All this has led us to hypothesize that this dispersed network of wallows, in their various successional states, is an important habitat for wetland-dependent species like shorebirds. Knowing how shorebirds use active and relic bison wallows can inform how we conserve, protect, and manage bison wallows for shorebirds and other wildlife in the future.  As an example, Nickell et al. (2018) found that inactive bison wallows harbor higher invertebrate abundance than active wallows. We also hypothesize that a mix of active and inactive wallows will provide a more diverse matrix of food resources and habitats for shorebirds and other species.

To improve our understanding of bison wallows and how they are used by wildlife, Manomet is working with partners in the Flint Hills Shorebird Conservation Initiative to deploy trail cameras to document which species are using them. To get this challenging endeavor right, this summer, we tested out a few different ways to deploy the cameras—and we had to be clever. Bison are curious creatures, so we need to set up cameras in a way that gets an unobstructed view of a wallow but does not attract the inquisitive attention of nearby bison. One camera has been nudged around 180 degrees resulting in thousands of beautiful photos of waving grass. Also, we need to be careful that the cameras don’t flood when rain hits. One already has met that fate!

If we are successful in identifying ways to set the cameras up in this challenging landscape, we will come back again in the spring when shorebirds are the most abundant, to see what species are using these rain-filled bison wallows. There are relic wallows all across the Flint Hills landscape, but many are hard to access. Trail cameras are one way to figure out if shorebirds are using them.

During the pilot effort this August, we observed many species using the habitat provided by bison wallows. It comes as no surprise that after a rain, the shallow pool of water that collected in a wallow was used by bison (introductory photo) and a variety of other species, including Killdeer (Charadrius vociferus), Eastern Meadowlark (Sturnella magna), and Mourning Dove (Zenaida macroura). Manomet and our partners in the Flint Hills Shorebird Conservation Initiative look forward to seeing what spring brings in.