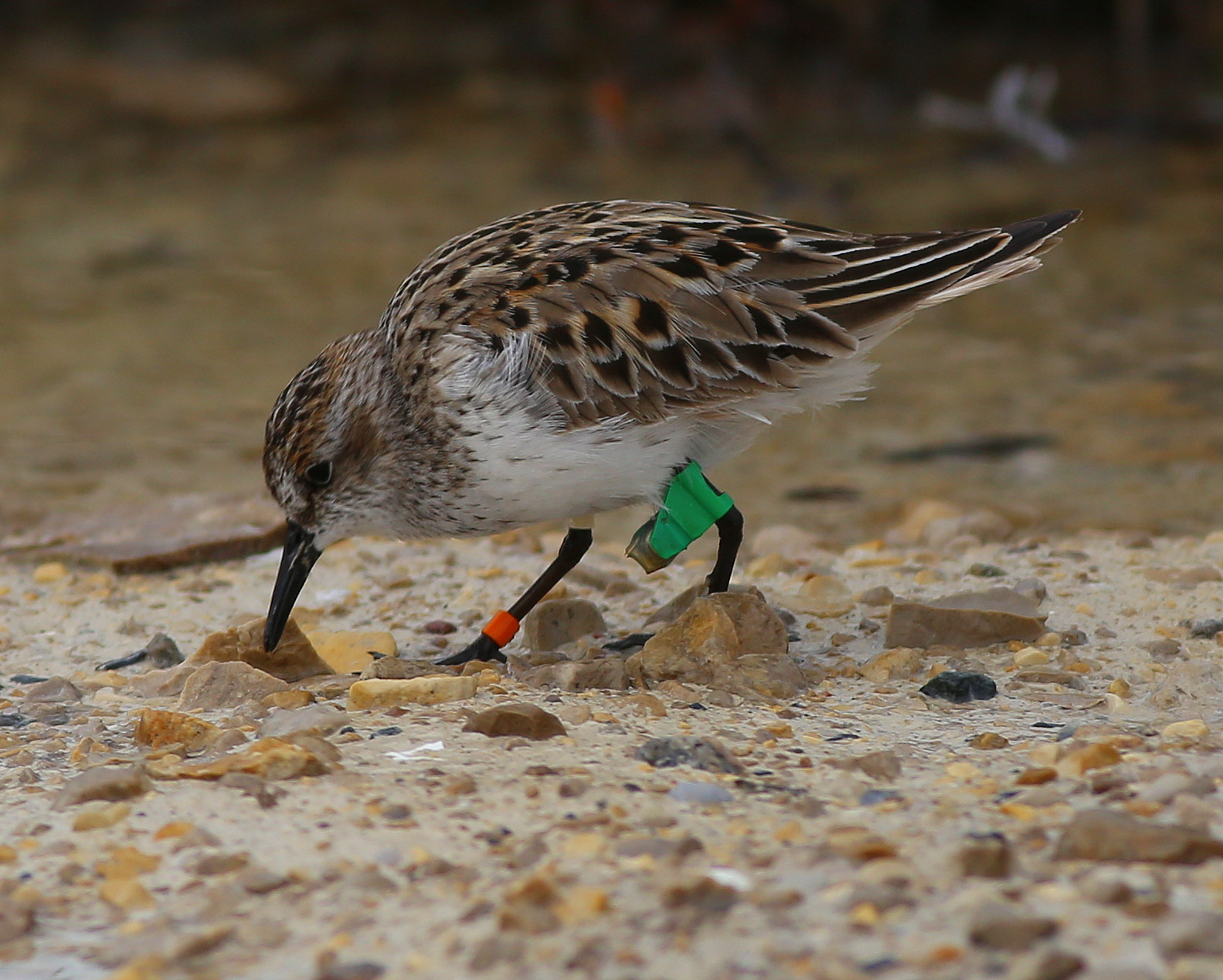 This article was written by Lesley Evans Ogden and originally published by audubon.org on April 5, 2017.  Photo by Brad Winn. See the original article here.

In an unprecedented study, scientists used high-tech geolocators to track the paths and stopover sites of the globe-trotting shorebirds.

This June, as they’ve done for more than a decade, fieldworkers will cross the treeless tundra of the High Arctic in pursuit of a tiny shorebird that, in another place at another time of year, is much easier to spot: the Semipalmated Sandpiper. Between the spongy ponds of newly melted snow, thick lichen, and short grasses that cover the undulating ground, the workers’ backs and knees ache as they search for the birds and their simple cup nests filled with tundra-colored eggs. Sometimes, fieldworkers search all day and have no nests to show for it.

The tedious work of finding the nests is just one of the challenges in revealing the life story of this sandpiper. Another is figuring out where its Arctic-bound journey began.

Decades of research on this drab brown bird have shown that it breeds across thousands of miles of tundra, ranging from far western Alaska to the extreme east of northern Quebec and Labrador, in three relatively distinct populations: in the eastern, central, and western Arctic. But outside of breeding season, it’s been hard to pin down whether each population sticks together through the winter, or if they mix and mingle. Tracking these far-flung sandpipers as they wend their way around the globe is seen as vital first step in conserving populations known to be declining in some areas. A new study, published today in The Condor, is the largest tracking study of the species to date—and it raises as many questions as it answers.

“These birds use such a huge geography that it can be very difficult even to know if they are declining,” says Stephen Brown, vice president of shorebird conservation at the conservation non-profit Manomet and lead author of the new study. “But in this case we had a very clear signal.” Surveys of birds wintering in the Guianas, Suriname, and Brazil suggest that numbers dropped by 80 percent since the 1980s—a signal that at least some populations were in trouble. However, similar surveys at the birds’ breeding grounds didn’t reflect an overwhelming downward trend. In the eastern Arctic, declines had been detected, but the sandpipers were doing just fine at their breeding grounds in the central and western Arctic.

“We had this big mystery to solve,” Brown says, and he needed a big team to do it: Ultimately, 23 researchers from 18 organizations were involved. Most of them worked at eight sites across the Arctic from 2011 to 2015 to fit light-sensing geolocators to the leg bands of 250 Semipalmated Sandpipers. Geolocators allow scientists to track the birds’ locations in the hopes of better understanding their year-round movements.

Shiloh Schulte of Manomet was part of the team that deployed and, a year later, retrieved geolocators from birds nesting on the flat, wet tundra of Coats Island in the eastern Canadian Arctic. There, in summer, ice from northern Hudson Bay encroaches on the island near their camp. “You have these giant ice cakes that get pushed up on shore,” Schulte says. The resulting habitat is a haven for shorebirds—as well as summering seals and polar bears. For the researchers, the presence of the bears means constant vigilance and fieldwork in pairs while scanning the tundra for camouflaged sandpiper nests and the tagged parents foraging nearby.

The team managed to retrieve 57 of the original 250 geolocators, and once it downloaded and analyzed the full data set from across the Arctic, “there were some big surprises,” Brown says.

The researchers expected to see neat structuring in winter-summer patterns, with eastern-breeding shorebirds wintering in the east and western-breeding shorebirds wintering in the west. Those in the central Arctic, they surmised, might go somewhere in between. Reality was a lot messier. Some populations did show clear geographic connectivity, such as Western Alaskan birds from Nome and Cape Krusenstern that wintered in the west, and Coats Island birds which stuck to the east. But birds that bred at the northern tip of Alaska wintered across almost the entire nonbreeding range of the species, from Peru to French Guiana; other Alaskan birds made a cross-continental foray from west to east in the winter.

The data also revealed some remarkable individual feats. One Coats Island-tagged bird made a non-stop flight from James Bay in eastern Canada, where it staged for a month, all the way to the Orinoco River Delta in Venezuela—some 3,000 miles. “That’s a very long way for a tiny bird to go without stopping,” Brown says. Geolocators also revealed that after leaving Coats Island, some birds staged on the Bay of Fundy for up to a month, while others headed straight to Delaware Bay, New Jersey.

One thing the study didn’t shed light on is what has been causing declines, says Peter Dunn, a shorebird researcher from the University of Wisconsin-Milwaukee who was not involved in the research.

Paul Smith, a coauthor on the study from Environment and Climate Change Canada, admits that, as of yet, they have “no smoking gun,” but their results provide plenty of fodder for future research. For example, they discovered new wintering areas such as the Maracaibo and Orinoco regions in Venezuela, places that require further study and possible protection. Separately, other researchers are currently investigating one possible threat to sandpipers wintering in northeastern South America: shorebird hunting by private gun clubs.

Those leads are enough for a team that has learned to not expect clear, easy answers. These are the same people who find it rewarding to trudge across the tundra searching for disguised nests, often in vain. But with enough patience and hard work, they know the answers will eventually reveal themselves.