Shorebirds are some of the most migratory animals on the planet. Even the smallest shorebirds have the capacity to fly nonstop over countries and oceans for thousands of miles. The data that Manomet scientists and our colleagues collect show that shorebirds are undergoing some of the most significant declines of any bird group globally. Some shorebird species—including Red Knot, Semipalmated Sandpiper, and Whimbrel—have declined more than 70% in the last 30 years.

Whimbrels (a member of the Curlew family) are one of the most wide-ranging shorebirds in the world and are easy to recognize by their distinctive down-curved bill—the perfect shape to barrel into the burrows of their favorite crustaceans. Finding out exactly how, when, and where  Whimbrels move during their annual migration cycle will help us to understand the causes of their decline, as well as allow us to apply these findings to other birds who share their pattern of breeding in the Arctic and Subarctic and migrating to the tropics. 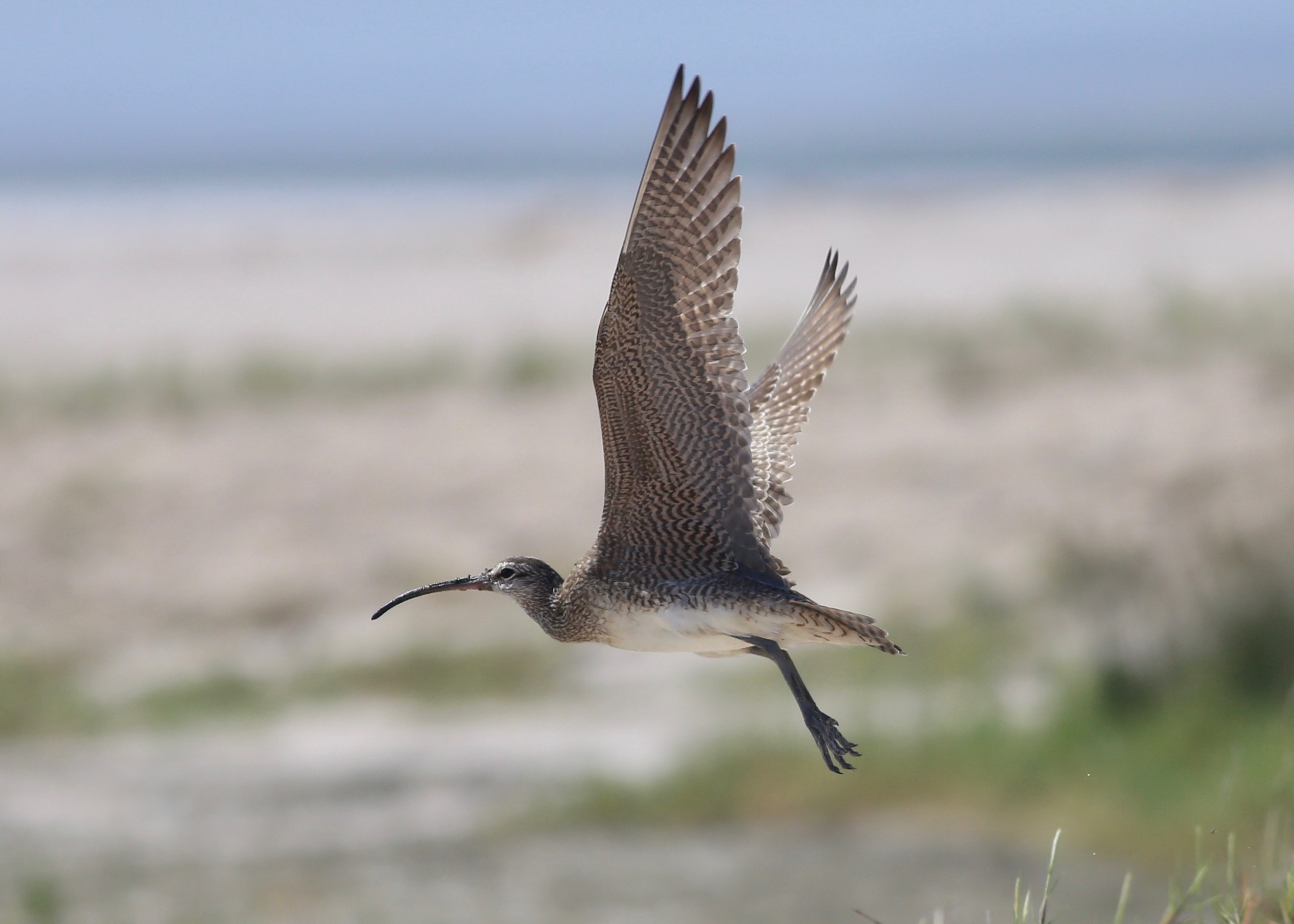 In February 2019, Manomet’s Director of Shorebird Habitat Management Brad Winn contributed to a study published in The Condor: Seasonal variation in mortality rates for Whimbrels (Numenius phaeopus) using the Western Atlantic Flyway. The research for this paper, led by Bryan Watts of the Center for Conservation Biology at William and Mary, tracked 33 adult Whimbrels with satellite transmitters for 12,802 bird-days to investigate patterns in survival throughout the year. “Whimbrels are large curlews; shorebirds that are robust enough to comfortably carry the solar powered satellite transmitters that give us long-term information with great levels of accuracy,” said Winn.

The study recorded 16 probable and 5 confirmed mortalities. Daily hazard rates were 5 times higher during migratory periods (fall and spring migration) compared to stationary periods (winter and breeding).  This survival rate is at the lower end of what is believed to be required to maintain a stable population. More than half of the mortality recorded during the study occurred during fall migration, while one-third of mortality occurred during spring migration either within terminal staging sites or as birds made final movements to breeding grounds.

What could be driving this mortality during southbound migration? There is a strong possibility that hunting of shorebirds for food and sport in many areas of the Caribbean and along the north coast of South America could be playing a large role in these declines. Some species’ populations have decreased as much as 80% since the 1970s and 80s. In the 1800’s and early 1900’s commercial hunting in the United States—prior to the establishment of current wildlife laws—was very similar to what shorebirds are experiencing now in the tropics. “Eskimo Curlews—which used to be a very common shorebird—are now extinct primarily because of unregulated shooting to supply restaurants in the growing US cities of New York, Boston, and Chicago,” explains Winn.

Long term survival of adult shorebirds is a critical part of maintaining a population. Many shorebirds don’t breed in their first year and the survival rate of their young is low. In addition, drastic changes and loss in habitat have affected how birds are able to use the land where they breed, migrate, and pass the non-breeding season. Exacerbated by impacts of climate change and human disturbance, these losses in the number and quality of important sites for shorebirds have begun to significantly impact the survival of many populations.

“It’s really important to undertake a collective effort to understand why shorebirds as a whole in general are declining because we need to know how to best focus our energies on alleviating the threats,” said Winn. “That’s a really big overarching part of what the Atlantic Flyway Shorebird Initiative is about: finding out and addressing what is driving the declines of shorebirds.”  The staff of Manomet’s Shorebird Recovery Program is working full-time to understand and implement management actions to reverse declining shorebird populations.

Whimbrels on the Wing

This is the story of three individual Whimbrels and their journeys.