The return of the fascinating American Woodcock

There are a number of signals nature provides to remind us spring is on its way. Rainy spells, the evening song of the first spring peepers, the first buds of spring flowers, and getting your shoes sucked off in eight-inch-deep muck puddles are all signs that a change in seasons is taking place. One of our favorite ways to tell that spring has sprung, though, is the return of the fascinating American Woodcock.

This bizarre, forest-dependent shorebird species (yes, shorebird!) ranges throughout the eastern half of North America and can be found as far south as the Gulf coast up into Quebec and Ontario. A close relative of the more widespread Wilson’s Snipe, woodcock are stout, tubby birds with huge, dark eyes and plumage that almost perfectly mimics the appearance of dry leaf litter. Their camouflaged appearance allows them to scamper around undetected along the forest floor where they raise their young and use their disproportionately long bills to forage for earthworms in the mud. 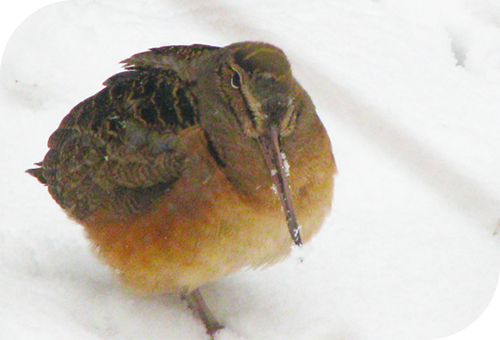 While the American Woodcock may not seem like one of the flashiest birds out there, males in fact engage in one of the most captivating courtship displays of any species in North America. At dawn and dusk during their breeding season (usually lasting from early March to May here in Massachusetts), male woodcocks perform an airborne dance over clearings or open fields. They preempt their aeronautics with a series of nasally “PEENT”s given from the ground, then vault themselves skyward in a spiral while their outermost wing feathers emit a twittering sound. Upon reaching a considerable height, they then plunge towards the ground like a fluttering leaf, slowing down just in time to land right back where they started.

Of course, there’s a lot more to American Woodcock than their springtime display. If you’d like to see these fantastic birds in action and learn more about their distinctive life history, you should consider joining Manomet and Wildlands Trust on March 16 as we take you to one of our favorite places to find the legendary Timberdoodle (we’ll explain that one later). Register here and reserve your spot today!

Stay in the loop!

Make sure you hear about all of our upcoming bird walks and discussions!