The importance of banding data 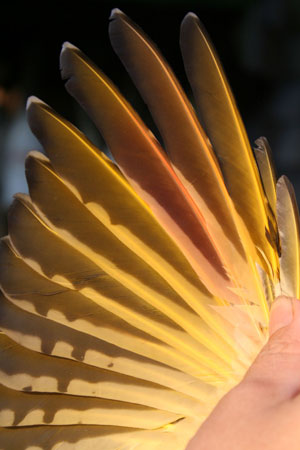 This week, Manomet’s Banding Lab brings to a close its 50th year of landbird banding.  It has been a tremendous season, and we look forward to providing you with a complete wrap-up of the season in our next newsletter. As we analyze all of the data collected over the past 14 weeks, we will be continuously asking ourselves: what can be learned from both short- and long-term banding data?

Evidence of the importance of long-term banding data was highlighted in a recent edition of Forbes magazine.  Data from Manomet’s Banding Lab helped to solve the mystery of why the North American Yellow-shafted Flicker (Colaptes auratus auratus), a medium-sized woodpecker with yellowish flight feathers, had unexpectedly developed some red flight feathers.

Manomet scientists often collaborate with researchers at academic and other research institutions, including Dr. Jocelyn Hudon, Curator of Ornithology at Canada’s Royal Alberta Museum.  He was intrigued by the mystery surrounding these red feathers and set off on a journey to examine the potential causes.

According to Forbes, “To finally nail this down, when Dr. Hudon and his colleagues examined flight feather replacement in Northern Flickers caught by the bird-banding station at Manomet, in Massachusetts, they were able to infer that these aberrantly colored Yellow-shafted Flickers on average acquired the unusual red pigment rhodoxanthin in early August. But this effect is not limited to Yellow-shafted Flickers: honeysuckle berries have also been implicated as the source of unusual orange feathers in cedar waxwings.”  The source of the red pigment is only found in the berries of introduced non-native honeysuckles and yew trees.

We are thrilled to have our research reach such a wide audience!  This research was also covered in The Auk, Newsweek, the German publication Natur, and more.

Birds are highly dependent on the foliage and plants around them. Every year, millions of migrant songbirds pass through the forests of the northeast on their way to southern latitudes. As they travel, they scour leaves for insects and eat the sugar-rich berries of native plants to fuel long-distance migrations.

Ecology seems to remind us that every organism is uniquely tied to its environment in unexpected ways be it through rainfall, berries, or months. We study birds for their uniqueness but they also reveal something deeper about the world we inhabit. The data from our banding lab improves our ability to understand the lives of migratory birds and address long-term population changes and the effects of climate change. More than a thousand visitors come through the program each year.