Wilson’s Phalaropes and Black-necked Stilts use the salt ponds of Ecuasal. Photo by Ana Agreda.

Marismas Nacionales, or “National Saltmarshes,” is a complex of saltwater coastal lagoons, mangroves, swamps, and ravines located near the small city of San Blas on the Pacific coast of Mexico. San Blas’s economy relies heavily on tourism, serving as a popular destination for vacationers. It is also a premiere spot for migrating and wintering shorebirds: over 200,000 individuals of 38 species use the area each year.

In 1992, Marismas Nacionales was named a Western Hemisphere Shorebird Reserve Network (WHSRN) site, the first such designation in Mexico. A few years later, WHSRN site partners at Great Salt Lake, Utah, and Chaplin Lakes, Canada, created the Linking Communities initiative with partners at Marismas Nacionales to collaborate on shorebird research, education, and ecotourism. This allowed business owners in San Blas to capitalize on their new internationally-recognized hotspot. In 2005, San Blas hosted its first-ever birding festival, welcoming birders from all over the world to witness the amazing migration along the Mexican coast.

In 2012 and 2013, birding represented 10% of the 8,307,000 pesos ($415,350) of tourism revenues for this small community. “For partners in San Blas, ecotourism was a necessary component of our conservation efforts,” said Doris Vasquez, a local hotel owner and supporter of the ecotourism initiative. “It has diversified our income opportunities, but just as importantly, it has increased community support and protection of our cultural heritage and quality of life.”

We live in a human-modified world. The ultimate challenge is to be smarter about how we integrate our many different values—economic, social, and environmental—in order to support all 7.7 billion of us (and growing). Business owners, rice farmers, cattle ranchers—these are only a few of the stakeholders who are playing a key role in making these integrations today. In fact, Marismas Nacionales is just one of 106 WHSRN sites where local communities rely on the natural resources of the site; a recent survey of more than half of all WHSRN sites found that each had at least one natural resource use.

In order to protect shorebirds, we need to work beyond just the conservation
community and fold in all stakeholders of working landscapes to support business and provide habitat values for shorebirds and other wildlife.

Instead of fighting against each other, there are ways that business interests and conservationists can work side by side to solve problems and create
opportunity. We need a new paradigm for the 21st century, working with the business sector to create the world we all want. This article introduces some examples of this approach.

Salt is essential to life on earth. Salt is produced through a variety of methods around the world, including solar evaporation. Through this method, saline water is collected in ponds where salt is concentrated through evaporation. This results in a salty brine that is moved to another pond where it can crystalize and the salt can be harvested. This process uses large, shallow ponds and high salinity water that also support large populations of brine shrimp and brine flies (Artemia spp and Ephydra spp) and result in vast areas without dense vegetation. These conditions provide shallow water and accessible food resources that can be used by nesting, migrating, and non-breeding shorebirds.

Throughout the Americas, there are many natural, modified, and human-built salt production areas shorebirds use regularly. At least twelve WHSRN sites have a portion of the area used for either artisanal or industrial salt production.

The human-built salt ponds on the Santa Elena peninsula in Ecuador produce 70% of Ecuador’s consumable salt. Waterbird use at the engineered ponds of the business Ecuatoriana de Sal y Productos Quimicos C.A. (Ecuasal) is renowned—the area has served as a popular site for bird enthusiasts since at least the 1980s. Systematic shorebird surveys began at Ecuasal 30 years ago, led by Ben Haase and Hans Gomez, as part of the International Shorebird Survey, and have continued ever since. In the 2000s, the Ecuadorian non-profit organization Aves y Conservación continued monitoring and nominated Ecuasal as an Important Bird Area. These data collectively supported the designation of Ecuasal as a WHSRN site of regional importance in 2007.

Today, conservation efforts have expanded from monitoring to include a site-level conservation plan for Ecuasal. Through long-term collaboration between Aves y Conservación and Ecuasal, multiple steps have been taken to ensure the sustainability of bird life on the company’s salt ponds, including reducing human disturbance and increasing public knowledge of the site’s importance.

“The success we have been able to achieve for bird conservation at the salt ponds is a direct product of the important collaboration that’s been built which supports the mutual benefits of the industry’s needs and the needs of migratory birds,” says Ana Agreda, Project Coordinator for Aves y Conservación/BirdLife in Ecuador.

“Without salt, there are no shorebirds and without shorebirds, we are not worth our weight in salt.” 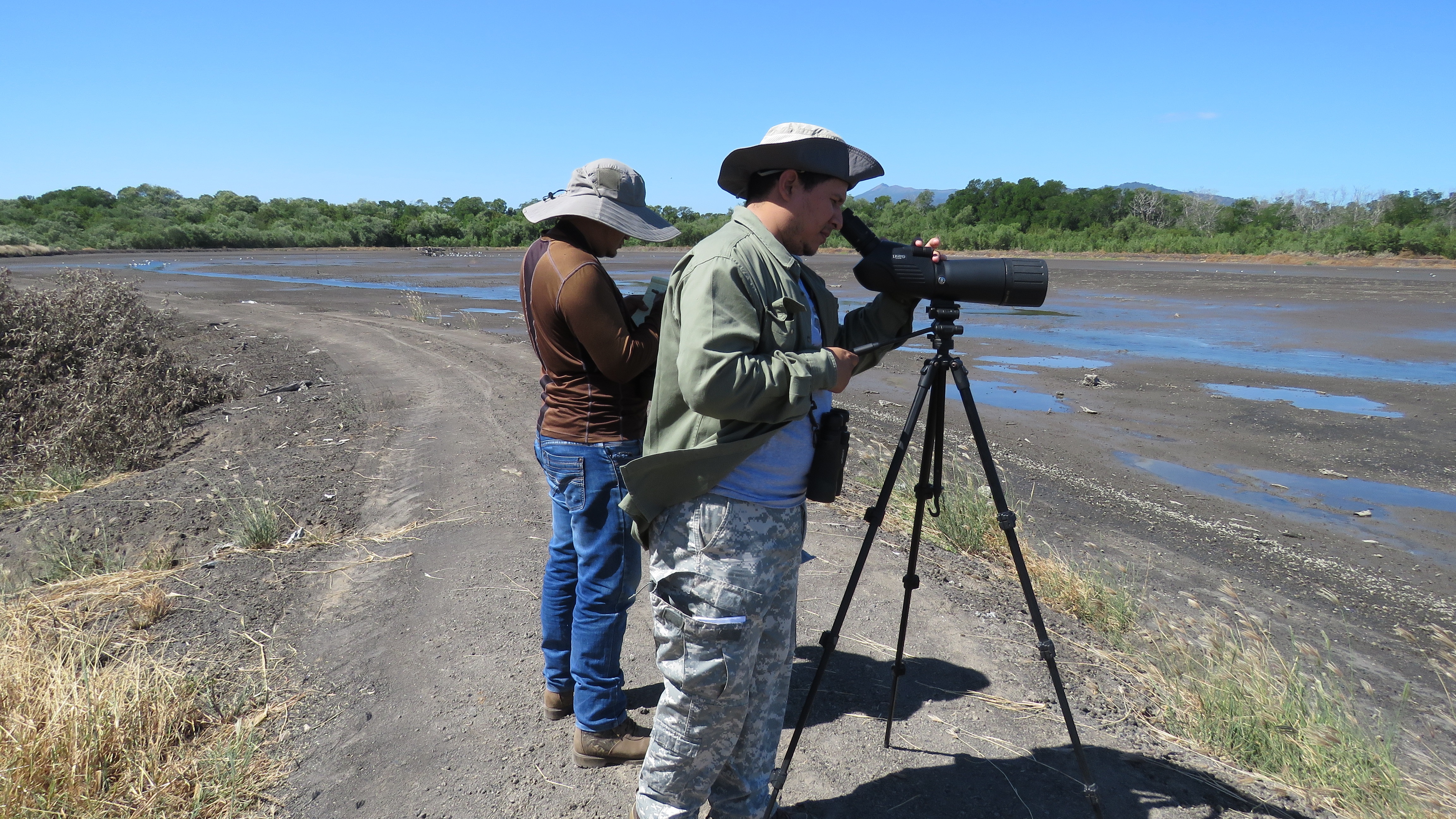 Counting shorebirds on a shrimp farm in Nicaragua. Photo by Salvadora Morales.

The most impactful use of land in modern history is agriculture. Today, nearly 25% of the world’s land surface is used to graze animals for human consumption.

Much of this agricultural land was once grassland or wetlands that provided important shorebird habitat. In many ways, modern day ranchers are recreating an approximation of the original grassland-herbivore ecosystem. But today, cattle are the dominant herbivore, instead of, for example, the American Bison or the Pampas Deer. As a result, some managed grasslands in North and South America are again providing habitat for upland specialist shorebirds such as the American Golden-Plover, Upland Sandpiper, and Buff-breasted Sandpiper.

49% of WHSRN sites report grazing as one of the uses of their land. Of those sites, 1.6 million acres are considered important for grazing.

Recognizing and respecting both conservation and commercial values, biologists and ranchers are figuring out how to manage cattle in ways that support shorebird habitat and sustain the business model. Working together this way is revealing other win-win outcomes including keeping the water clean and reducing soil erosion.

At the Cheyenne Bottoms WHSRN site in Kansas, The Nature Conservancy (TNC) has integrated grazing into their land management program to improve habitats for shorebird species. By working with local ranchers to implement a combination of grazing, haying, and mowing on TNC-owned lands, conservationists and ranchers both benefit from the creation of high-quality habitat for long-distance migrant shorebirds. Shorebird use increased 43% in areas managed with intentional grazing, mowing, and haying to improve habitats.

“Our tenants have been supportive of the use of their cattle to create the short and sometimes sparse vegetation that shorebirds prefer,” says Robert Penner, Cheyenne Bottoms and Avian Program Manager for TNC. “Grazing for longer periods in the fall to the end of the growing season not only creates shorebird habitat for spring migration, but, similar to prescribed burning, it improves the health of the grasslands.” Penner explained that this grazing method, when used in a rotational system, also creates better habitat for other grassland bird species and better grazing in the following year or two. 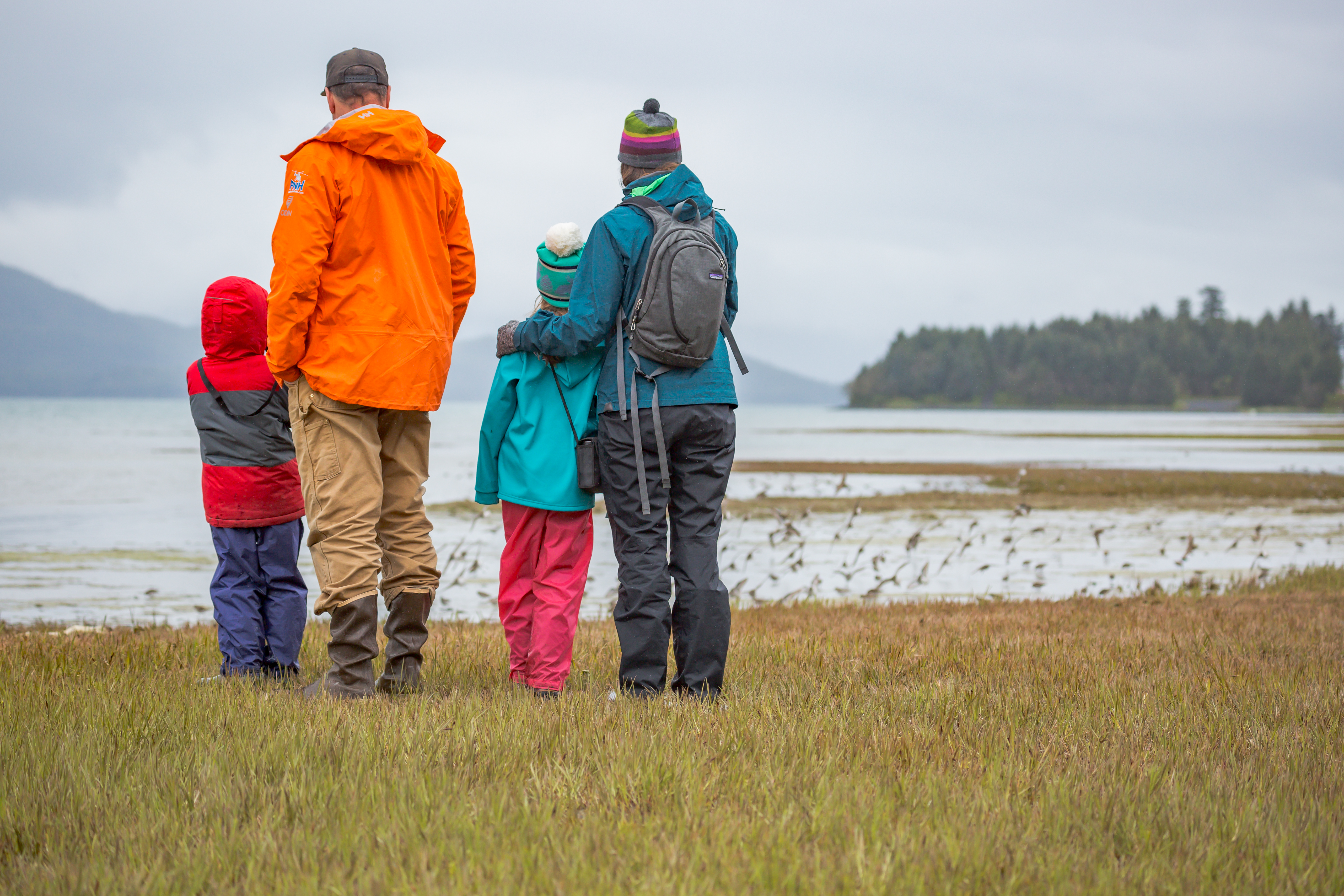 In 2016, 45 million birders in the United States spent $7 billion on optics, cameras, and bird seed (not including the gas, food, lodging, and other purchases associated with birding).

Nature-based tourism is a business that can be especially significant in small communities, such as San Blas. In the town of Cordova, Alaska, population 2,300, ecotourism plays a key role in diversifying the community’s income. Located near the Copper River Delta WHSRN site, the Cordova Chamber of Commerce and Chugach National Forest have been hosting the Copper River Delta Shorebird Festival since 1990, which attracts birders from around the world.

To better understand the economic impact, the Cordova Chamber of Commerce distributed money-like vouchers called “Birder’s Bucks” to local merchants leading up to the 2017 festival. For every $20 a festival attendee spent, they were given one Birder’s Buck by the business to redeem in a raffle, which then allowed the festival to track how much money was spent in the community. In 2017, $10,000 worth of Birder’s Bucks was collected, and $15,000 in 2018.

“It was meant as an incentive for birders to get into stores and spend money at local businesses, and to monetize and record festival impact on local merchants while offering something fun for visitors. A win-win-win,” says Cathy Renfeldt, Executive Director for the Cordova Chamber of Commerce.

While nature-based tourism is considered to be one of the more low-impact natural resource uses, it is not without challenges to shorebird conservation. An increase in the number of people and activities in areas that shorebirds use can have a negative impact, decreasing the amount of time that shorebirds have to safely feed, rest, and in some places, nest. Many WHSRN site partners work with the tourism industry (tourism is the most widespread natural resource activity at WHSRN sites) or land managers to develop best practices for visitor interaction with the natural environment including observation towers, trails, and wildlife-only areas.

WHSRN site partners also embrace broader support of nature-based tourism beyond shorebirds. They help improve tourism amenities, infrastructure, signage, and other resources for tourism that help ensure success for the community as well as for habitat.

It is increasingly apparent that negative impacts on the environment are not good for business. In fact, businesses’ careful attention to ecosystem services and biodiversity can be more cost effective and sustainable than avoiding them. By working with the business sector, Manomet and the conservation community have the opportunity to integrate shorebird conservation with societal needs and values, helping to ensure the sustainability of natural resource use and to bridge the divide between the for-profit and non-profit worlds. Doing so is crucial to the success of shorebird conservation efforts.

In the Gulf of Fonseca, local conservation groups, Quetzalli Nicaragua, Asociación Hondureña de Ornitología, and SalvaNATURA are working with the WHSRN Executive Office and National Audubon Society to assess opportunities to integrate shorebird conservation with shrimp aquaculture and to develop best management practices in collaboration with aquaculture companies. This emerging work will have applications at many sites where shrimp aquaculture intersects with important shorebird habitats.