Recovering shorebird populations from the ground up: An update on the Coalitions for Shorebird Conservation 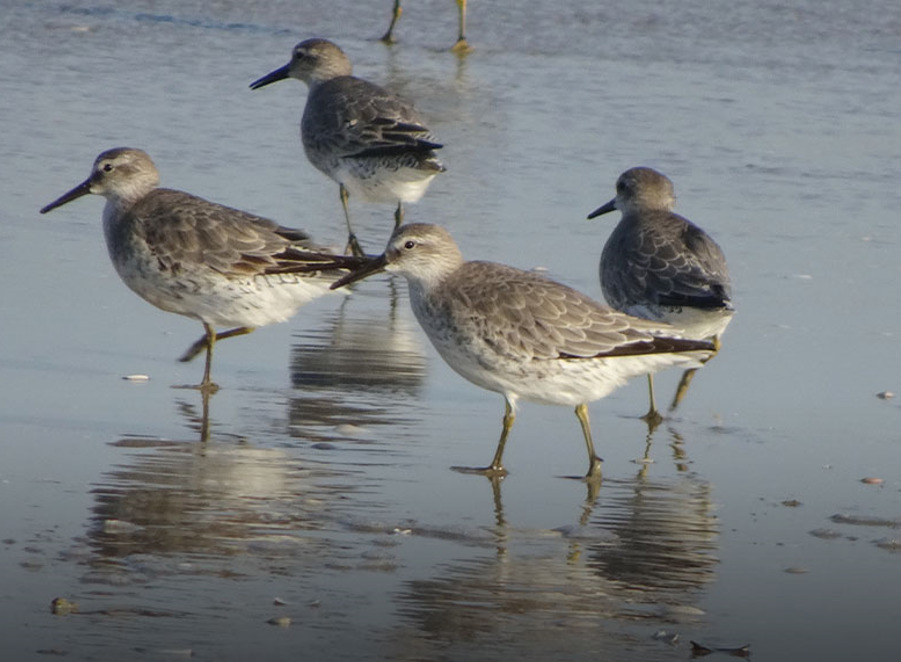 As a young teenage birder, my father regaled me with anecdotes about how bird populations had changed since his youth. At the time, the thirty-plus years of conservation efforts that restored some species to their historic population levels did not cross my mind. Now the realities of shorebird conservation underpin my every day, working with researchers and citizen scientists throughout the Western Hemisphere.

Shorebird conservation is not for the faint of heart. From sleepless nights wandering grasslands in Uruguay to capture and band Buff-breasted Sandpipers (Calidris subruficollis), to trekking through rain-filled bison wallows in Kansas to count the various shorebird species using them as habitat, the effort required is tremendous. To learn about where shorebirds go, their needs when they arrive, the threats they face and how to address them to safeguard a population, researchers persevere.

Why? Because shorebirds are suffering some of the most marked declines of any group of birds in the world. In recent decades, threats to shorebird populations have become more diverse and widespread and pose growing conservation challenges. Tackling these challenges is more than just one organization can achieve.

Long-lasting conservation success requires strategic collaboration among many stakeholders at the local level and across each species’ full geographic range. Manomet’s Coalitions for Shorebird Conservation approach brings key stakeholders together to tackle the myriad threats at important sites for shorebirds. The Coalitions objective is to grow effectiveness of site-specific work by coordinating actions across sites connected by the same species, threats, or conservation strategies.

Mixed flocks of shorebirds in Nicaragua. Photos by Salvadora Morales.

Manomet initiated a targeted site conservation approach at thirteen of the most important shorebird sites in the Americas. These sites are significant because of high numbers of shorebirds, substantial conservation concerns, the scope to build broad coalitions of local stakeholders, and each sites’ potential value within flyway-scale initiatives. The habitats at these sites vary from grasslands to shrimp farms, from intertidal mudflats to ephemeral inland wetlands. Still, Manomet believes that the approach can be translated to other sites that share the same species, threats, and/or conservation strategy.

In Nevada, at the 220,000-acre Lahontan Valley Western Hemisphere Shorebird Reserve Network (WHSRN) site, Manomet is working with Audubon, Nevada Department of Wildlife, and U.S. Fish and Wildlife Service to improve habitat management at the Stillwater National Wildlife Refuge. These partners are also working to support a shorebird-focused management plan for the Carson Lake and Pasture. More than 250,000 shorebirds use the Lahontan Valley wetlands annually, including 150,000 Long-billed Dowitchers (Limnodromus scolopaceus). The formal inclusion of the Fallon Paiute-Shoshone Tribe lands in the WHSRN site will also help safeguard 8,337 acres of shorebird habitat.

“Over the years, the Laguna de Rocha grasslands, its shorebirds, and its cattle ranchers have taught us many things, and they will continue to do so,” says Joaquín Aldabe, Conservation Specialist for WHSRN. “Maybe the most important lesson for agriculturalists, biologists, neighbors, and institutions is that production and conservation are not mutually exclusive; in fact, they can be complementary. In an agricultural region, this vision is important.”

Major Goals of the Coalitions for Shorebird Conservation

A major focus of the Coalitions approach at four WHSRN sites (Bahía de Todos Santos in Baja California, Mexico; Estuario de Río Gallegos in Santa Cruz, Argentina; and Chile’s Desembocadura del río Maipo and Bahía Lomas) is a process to determine good governance at each site. “Good governance is critical to addressing many of the threats and underlying drivers at key sites for shorebirds,” says Diego Luna Quevedo, Conservation Specialist, WHSRN. “Governance should be considered as the processes and relationships that determine who has authority over an area of critical habitat, how decisions are taken, and who is accountable and to whom.”

Another major goal of the Coalitions work is to integrate the needs of shorebirds into productive lands. This work has already begun in Louisiana ’s Working Wetlands, thanks to support from the National Fish and Wildlife Foundation’s Conservation Partners Program in partnership with the USDA’s Natural Resources Conservation Service (NRCS). Manomet is working with NRCS, Louisiana Department of Wildlife and Fisheries, Louisiana Department of Agriculture and Forestry, Ducks Unlimited, and producers on a suite of shorebird-focused management practices and application guidelines. 6,000 acres of working lands will benefit from these practices.

Shrimp farming is an expanding industry, especially in Central America. Shrimp farms convert salt flats and mangroves to aquaculture zones, many of which overlap with important shorebird sites. In the Gulf of Fonseca, Manomet is working with Quetzalli Nicaragua, the Asociación Hondureña de Ornitología, and the shrimp producer SEAJOY to implement best management practices in 10,000 acres of shrimp farms. To help provide greater economic incentives for adopting shorebird-friendly best management practices, Manomet is working to incorporate shorebirds and shorebird needs into industry environmental certification standards.

“As an environmentally and socially responsible company, SEAJOY welcomes the opportunity to integrate the needs of shorebirds into its operations,” says Alberto Obregón Mendoza, Corporate Manager, Environmental Sustainability and Certifications, SEAJOY. “We actively participate in the protection of migratory birds that use our coastal marine concession areas as feeding and resting sites during their migrations throughout the hemisphere, and take pride in the importance of our farms for many species, holding up to 80% of the biogeographic populations of some of them.”

A significant need for shorebirds at many key sites is safe habitat, free from non-natural disturbance. At the Georgia Bight in the southeastern U.S., partners are working to delineate 101 acres on four public beaches as “Wildlife Beach Zones”—safe areas for shorebirds (and other wildlife) to nest, roost, and feed. At the Estuario de Río Gallegos, a process to zone the mudflats will add 474 acres under new regulations and management agreements, including the establishment of disturbance-free wildlife zones. And at the Reserva de Costa Atlántica de Tierra Fuego WHSRN site in Tierra del Fuego, Argentina, new regulations and management agreements are expected to safeguard 99 acres of critical roosting habitat from disturbance. Meanwhile, at the Bahía de Todos Santos, zoning of the beaches combined with a plan for volunteer beach stewards will reduce disturbance on 4,722 acres of critical shorebird habitat. These measures will benefit both the roselaari and the threatened rufa subspecies of Red Knot (Calidris canutus), in addition to local breeders and visitors such as Wilson’s and Snowy Plovers (Charadrius wilsonia and C. nivosus), and Magellanic Plover (Pluvianellus socialis).

Although designation as a WHSRN site does not provide formal protection, it does help safeguard sites, through international recognition and as a tool to identify critical natural habitat for shorebirds (used by many lending institutions as part of their environmental safeguard policies). As part of the Coalitions approach, new WHSRN sites will be designated within the Gulf of Fonseca in El Salvador and Honduras, to complement the existing WHSRN site within the Nicaraguan part of the Gulf, the Delta del Estero Real. A WHSRN site will also be designated at the coastal wetland of Chamiza, in Chile, a key site for wintering Hudsonian Godwit (Limosa haemastica), and part of the landscape of critical habitats for the species centered on the Eastern Wetlands of Chiloé Island WHSRN site. The designation at Chamiza will be part of the Rilon Kawin Indigenous Peoples Coastal Marine Protected Area (Espacio Marino Costero Protegido de Pueblos Originarios; EMCPO) which has been proposed by the Asociación de Comunidades Rilon Kawin, and once designated will cover a total area of 212,270 acres of coastal and marine habitats, including the 4,361 acres of the Chamiza wetlands.

Underpinning the work at every Coalitions site is engagement with key stakeholders, including local communities, landowners, local and national authorities, researchers, and existing and potential donors. At the Flint Hills WHSRN landscape in Kansas, the Flint Hills Shorebird Conservation Initiative will improve and increase knowledge of shorebird use of different habitat types and identify management actions that can increase and enhance habitat availability. Meanwhile, at the Lagoa do Peixe WHSRN site in Rio Grande do Sul, Brazil, Manomet is working with SAVE Brasil and the local community to maintain the area’s status as a National Park while integrating the sustainable use of natural resources. This benefits the well-being of the local community and shorebirds (e.g. through the use of livestock to maintain habitat for Buff-breasted Sandpiper).

Conservation takes time. Pushing back threats to biodiversity, reversing declines in habitat, or rescuing a single species at the edge of extinction are all exercises in extraordinary patience and uncompromising persistence. Conservation requires a piece-by-piece strategy, gradually building the momentum needed for long-term solutions. Through a targeted approach to site conservation, Manomet and its partners are trying to fast-track a coordinated and comprehensive approach to shorebird conservation in the Americas, connecting site-based action with landscape and hemispheric-scale conservation planning.

This work is being made possible thanks to the support of the BAND, Bobolink, and David & Lucile Packard Foundations, with additional support from the R. Howard Dobbs Jr. Foundation, and National Fish and Wildlife Foundation’s Conservation Partners Program in partnership with the USDA’s Natural Resources Conservation Service.

For further information about the actions at each site and a full listing of site partners, please visit the Coalitions for Shorebird Conservation page below.