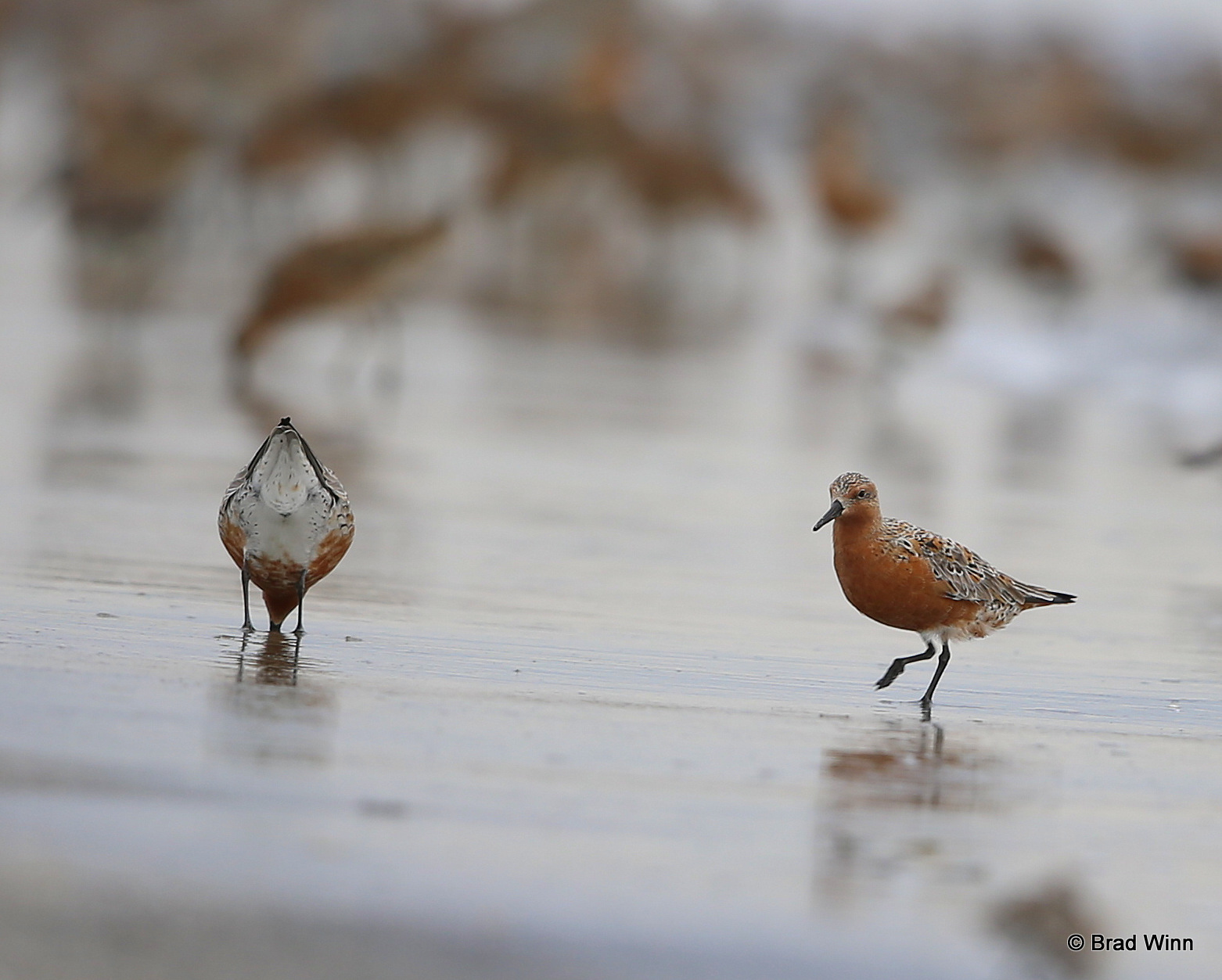 PLYMOUTH, MA January 26, 2018  A new study published in the February 2018 Journal of Wildlife Management reveals the importance of the Georgia Coast as a key migratory stop-over for supporting large numbers of Red Knot (Calidris canutus rufa) on their southbound migration. This collaborative effort from members of Manomet, Inc., the USGS Patuxent Wildlife Research Center, Georgia Department of Natural Resources, and Delaware Division of Fish and Wildlife, also provides the first ever population estimates of rufa Red Knots wintering in the southeastern U.S., Caribbean, and northeastern Brazil.

“This study emphasizes the importance of Georgia’s Altamaha River Delta as a very significant post-breeding migration staging area on the U.S. Atlantic,” says Brad Winn, Director of Shorebird Habitat Management at Manomet, and co-author of the publication. “Shorebirds that migrate long distances are very difficult to study and this work is contributing immensely to what we know about these spectacular birds. Manomet and partner organizations committed to shorebird and habitat conservation now have more knowledge about how to direct current and future conservation actions for Red Knots and other shorebirds.”

Using mark-and-recapture resight methods (observing red knots that had been captured and fitted with uniquely coded leg bands in other locations during migration), the authors discovered that most birds that stopped at the Altamaha staging area were destined for locations in the northern part of the nonbreeding range, and were not on their way to the far southern reaches of South America, as other knots in the subspecies are. This represents a new understanding of how these birds use the coastal areas of an immense migration corridor spanning from high Arctic Canada to the tropics, and will help steer additional studies and management activity to benefit these threatened birds. The results of this study provide valuable information on population structure and migratory connectivity of the Red Knot that will be valuable for conservation planning in the future.

A total of 23,400 Red Knot were estimated to migrate through the Altamaha River Delta, with approximately 20,800 of these birds believed to winter in the northern part of the subspecies’ nonbreeding range, of which about 10,400 winter in the southeastern USA and 5400 in northeastern Brazil. Red Knot migrating to the northern wintering range remained at the Altamaha River Delta for 42 days, whereas birds migrating to Tierra del Fuego remained only 21 days.

Georgia’s Altamaha River Delta is a site of regional importance, as designated by the Western Hemisphere Shorebird Reserve Network (WHSRN)—a conservation strategy housed under Manomet that works to protect key shorebird habitats throughout the Americas. To date, WHSRN conserves more than 36.9 million acres in 15 countries. The Delta serves as a resting site for migrating shorebirds, waterbirds, and landbirds, including high concentrations of American Oystercatcher, Red Knot, Dunlin, Piping Plover, and Whimbrel.  In October 2017, with additional shorebird data collected over the last two decades, including the information gathered for this Red Knot study, the WHSRN council has named most of the Georgia Coast, as a “Landscape of Hemispheric Importance,” becoming the 100th WHSRN site to be recognized throughout North and South America.