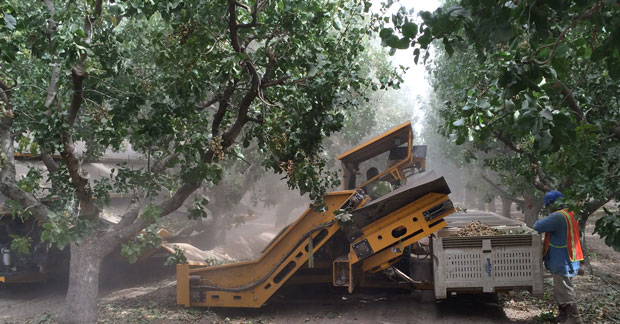 My second set of farm visits took me to the four corners of the U.S. I started from my home in Maine and traveled to Florida, back to Maine, and then to Washington and California to cover the fruitful rim of the U.S.  By now, my confidence had grown that a single set of indicators could be used to assess the sustainability of an agricultural operation.  I was confident that the general principles and objectives of sustainable agriculture are universal, so presumably core indicators would be as well.

On my last trip (read about it here), we had met in the Delta with one of the most challenging farm managers, Philipe, and his perspective had been both a helpful one and a critical one.  He had serious questions about constructing a framework that respected the legal boundaries of the lease agreement which provides an implied covenant of quiet enjoyment to the tenant.  His questions about the biodiversity components of the framework were equally challenging.  We would get a second chance to cover this ground on a vegetable farm in Florida.

Philipe was unable to join us in Florida, but one of his managers did and was very helpful.  The issues surrounding tenants were quickly resolved, but biodiversity was another matter. What are the implications if the framework aims to conserve both federally-listed Threatened and Endangered Species (T&E species) and Species of Greatest Conservation Need (SGCN)?  Hancock Agricultural Investment Group (HAIG), the organization Manomet is working with to develop this framework, conducts a due diligence review of T&E species issues before purchasing a property to largely avoid investing in difficult to manage farmland. Hence, we knew that T&E species were largely not a problem and if they did become an issue, the topic is well understood.

The issues surrounding SGCN were more complex; SGCN are species at risk because they depend upon rare, declining, or vulnerable habitats and typically have small and/or declining populations.  We knew that we needed to start coming to grips with the implications of conserving SGCN.  I thumbed through the online Florida State Wildlife Action Plan before going into the field to determine what avian SGCN might be on a Florida vegetable farm.  I focused on birds as a test case as I am better acquainted with the habitat requirements of birds than other species groups. I also have the fortune of working with a number of colleagues who are experts on this topic! This yielded a long list of grassland birds, wetland species, and shorebirds, including many species that I could not imagine on a vegetable farm.  No sooner did we drive on to the farm did I see an example of an SGCN, a Crested Caracara in a turf field.  No one told me that the farm included a few acres of turf!  We are still working to determine the magnitude of the challenge of including the conservation of SGCN, and this could potentially be a tough item to resolve.

My trip to Washington took me to Yakima Valley to see apples and not far from my first forays into sustainable forestry indicators with Wallowa Resources in Enterprise, Oregon.  The irrigated volcanic soils in this desert location make it a prime area for agricultural production.  Water is tightly managed by the state and so it avoids many of challenges faced by irrigated agriculture in California.  From Washington, we flew on to northern California to review another almond ranch.  Both operations were tightly run operations with many practices and systems in place to make them sustainable.

The final meeting was a rescheduled trip to meet an Idaho farm manager.  While he had several apprehensions going into our meeting, his biggest surprise (as I found out later) was that I wasn’t wearing Birkenstocks or L.L.Bean boots.  I had learned a thing or two while working with foresters and farmers. Incidentally, I have never have owned a pair of Birkenstocks and my L.L.Bean boots are reserved for field work.  I considered the meeting a success since despite his doubts going into the meeting to review the framework, we came out the other side with just a few tweaks on language to create a better fit and not shy away from sustainability.  Along the way we had some wonderful conversations about sustainability of the entire food system.  After 16,000 air miles, I had steered clear of the worst of the ‘cow patties’ and concluded a draft framework for agricultural environmental sustainability that could cover the length and breadth of perennial and row crops in the U.S.