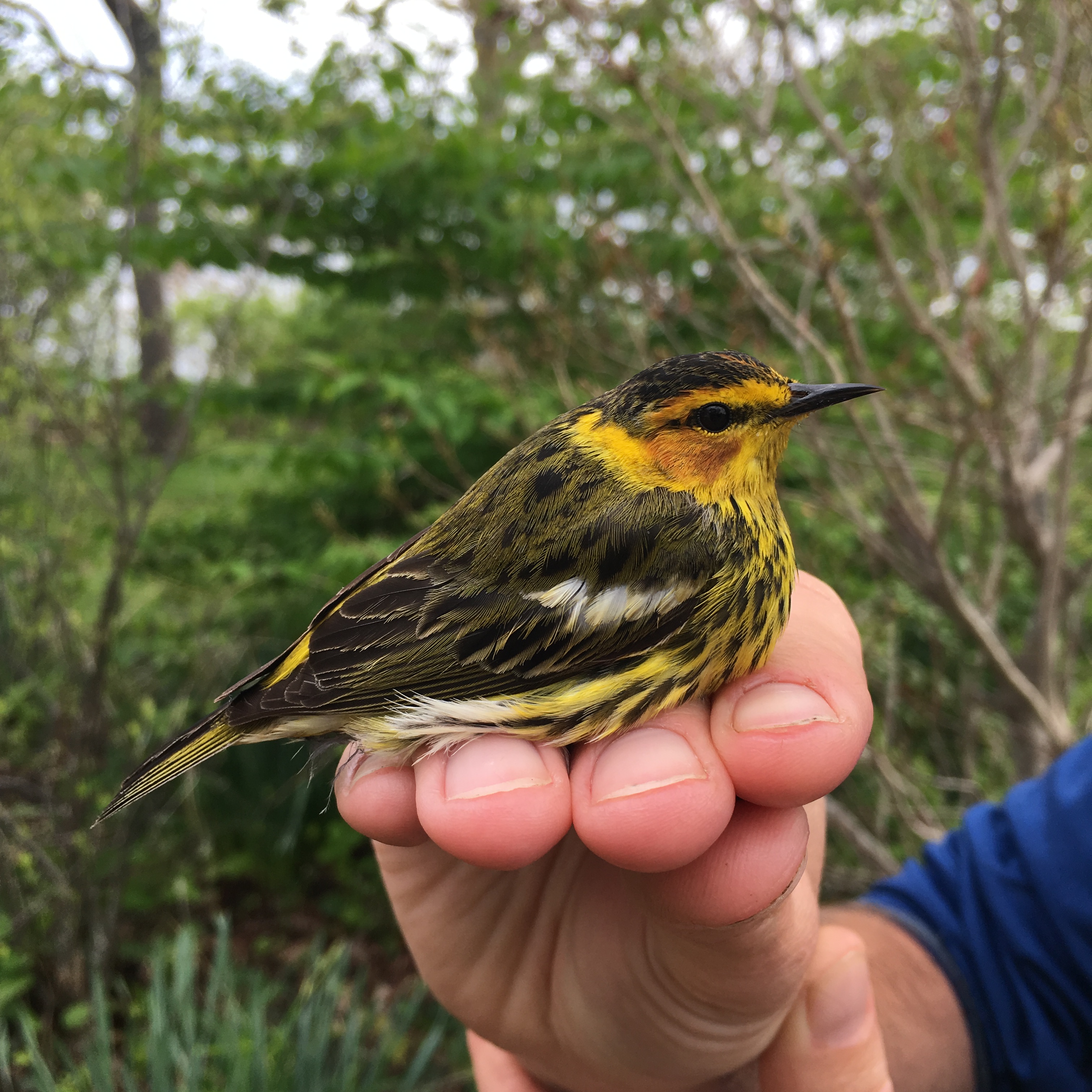 The spring 2018 banding season at Manomet is off to a fast start. As of May 18, the banding team has banded 1,294 new birds and processed an additional 698 recaptures (71 total species). To put these numbers in perspective, the 1,294 birds banded surpasses the season total for 11 out of the last 20 spring seasons.

As the season began in mid-April, there was still a hint of winter in the air. The first weeks were dictated by wintry mixes, and our captures of Slate-colored Juncos, Fox Sparrow, and Winter Wren reflected the lingering chill. Before long, however, the first truly warm days of 2018 came to Manomet, with temperatures soaring to near 70 degrees. As expected, these southerly breezes carried new migrants to our woods, highlighted by several captures of Pine, Palm, and Yellow-rumped (Myrtle) Warblers.

Now in the peak of the Neotropical migrant passage, Manomet’s woods are filled with warblers, vireos, thrushes, and flycatchers. The week of May 14 yielded the undeniable species highlights of the season to this point. Amidst the throngs of more common species, we banded two male Cape May Warblers, the first individuals of this species to be banded in the spring at Manomet since 1993. To top it off, we banded two Bay-breasted Warblers and one Blackburnian Warbler, beautiful boreal breeding species that average less than one capture per season. Why this peak in mid-migration? Director of Landbird Conservation Trevor Lloyd-Evans says, “Early migration of songbirds was held up south of us by a late cold spring. Then the dam broke with strong SW upper-level airflows from around the mid-Atlantic states—a probable launching point for passerine migrants that descend into SE New England by the following dawn.”

In addition to banding, we have kept a meticulous daily record of all birds observed on the property. We have recorded 157 species at Manomet since the beginning of the banding season, and in doing so, have brought the 2018 Manomet bird list up to 170 bird species. This number represents the second highest total for any location in Massachusetts for 2018 (behind Parker River National Wildlife Refuge).

The daily schedule of a bander provides a great opportunity to witness the transformation from winter to spring. As we walk the same trails every day, we keep tabs on the pulse of the land, whether through the flowering of plants, the unfurling of ferns, or the initiation of bird nests. We’ve witnessed Humpback and North Atlantic Right Whales (with the naked eye, just off the bluff adjacent to the banding lab!), coyotes running along the shoreline, and the drama of snakes consuming frogs.

We have enjoyed visitors ranging from Wheaton College students, the South Shore Bird Club, local photography groups, and more. On Thursday, April 26, we were visited by Channel 4, CBS Boston, whose crew recorded a segment of the lab in action for their evening news.

A beautiful forecast is on deck for this coming week, with temperatures nearing the 80-degree mark. With the warm southerly flow, we anticipate another push of migrants and the continued arrival of our summer breeders at Manomet. Make sure to crack your windows and enjoy the bird son

Want to keep tabs on the daily pulse? Follow Manomet Banding on Instagram and Twitter. You can also check out what is being seen on Manomet’s iNaturalist page (Manomet iNaturalist) and eBird hotspot page (Manomet eBird).