Grocers cut waste, but does it earn them customers? 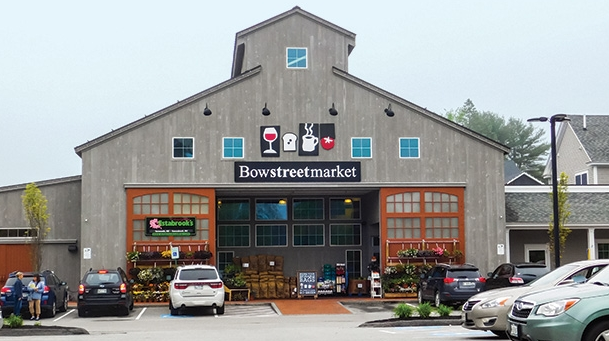 Environmental scientist Peter Cooke nods approvingly as he browses the aisles of Freeport’s Bow Street Market with the store’s general manager, Jim Frey, pointing to the community bulletin board and seating area by the front door, the blackboard above the meat case noting where its locally sourced contents come from and the LEDs that replaced fluorescent lights in refrigerator cases.

“Those are all points that add up,” says Cooke, program manager of sustainable economies at Manomet Inc., a Plymouth, Mass.-based nonprofit that initiated the nation’s first Grocery Stewardship Certification in 2012. Cooke, who works in the nonprofit’s Brunswick office, assesses grocers, assigning them points for conservation, community interaction and use of new or clean technology. Smaller grocers must get 100 or more points to get initial certification, while larger grocers must tally 150 or more. They’re expected to improve to get more points when reevaluated in three years.

“We assess lighting, operational features and quantify what those mean for sustainability,” Cooke says. “Most of the [37,000 U.S.] grocers don’t know what quantifiable value means to the store [in energy, waste and operational savings]. They sometimes don’t realize their role in the community. Americans go to the grocery store twice a week, so stores can demonstrate sustainability.”

Cooke says Manomet chose grocery stores to measure because they are among the top businesses impacting the planet, and thus can benefit from sustainability measures. LEDs, for example, can help cut costs. Manomet already has 700 stores in its certificate program, including Hannaford Bros.’ 189 stores. Each store saves an average of $70,000 annually on energy and waste. Another $20,000 can be had in inexpensive-to-implement operational efficiencies, he says. Of the 700 stores, 500 have earned certificates and the rest are in the process of doing so.

In addition to savings, such good business stewardship also attracts increasingly sophisticated consumers looking for stores with environmentally and community friendly missions. Research by Cone Communications of Boston found that 71% of millennials and 63% of overall Americans hope businesses will take the lead to drive social and environmental change going forward in the absence of government regulation. Globally, that number rises to 91% of consumers expecting companies to do more than make a profit.

Corporate and social responsibility measures translate to employees as well, attracting some to work at such companies or staying with them and working more efficiently. Cooke points to a Gallup report finding that stores engaging their employees in sustainability measures are 18% more profitable and 18% more productive.

“We give employee engagement more points than energy installation,” he says of Manomet’s rating system.

Frey says Bow Street sends emails to its teams to communicate what the store has achieved in sustainability measures. Bow Street has about $15 million in revenue and is profitable, he adds. It has 109 employees in 15,000 square feet of space. LED lighting and other measures are helping improve profitability in what is a cut-throat competitive market with narrow margins vying for consumers.

Bow Street uses low-energy LEDs for all of its track lighting, and has replaced the fluorescent lights in its 55 refrigerator cases with LEDs. The latter translated into a $40 savings per door per year to total $2,200 saved annually. With those LEDs already in place, Bow Street is in the process of putting LED lamps in the 18 overhead lights in the store. It will cost a total of $5,200, including parts and labor, to replace all the lamps, but that will result in $1,000 in electricity cost savings annually, making the payback about five years, Frey says. He adds that the fluorescent bulbs are easy to swap out with LEDs, which can last more than 60,000 hours versus the twice a year swap-out of fluorescents.

Bow Street also uses iceless seafood displays, which can save $5,000 in energy compared to ice and 100,000 gallons of water a year, Cooke says. Lighting changes pay back the quickest, Cooke says, adding “every $1 in energy efficiency is like putting $18 into the revenue stream.” That includes keeping seals tight on freezers and meat coolers so they don’t leak and require extra energy to keep cool. Each leaky door, he says, can cost the store $2 to $5 a day.

In the end, Bow Street scored 102, more than the 100 required for a small store.

“What stood out is their conscious effort to design the store to use as a community gathering center,” Cooke said. “There are seats and tables when you come into the store, and the locally sourced meat is right there when you walk in, and is highlighted [on a blackboard].”

Bow Street moved into its current facility in May 2011, with the Nappi family owners aiming for an appealing, open environment.

“Some people shop here to four times a day, coming in for coffee, lunch and shopping,” Frey says. “We are designed as a community market where neighbors meet neighbors while going up and down the aisles.”

Cooke looks for different things as he strolls the aisles: organic items, easily accessible displays, clearly marked foods, especially those sourced locally. An environmental scientist by training, he formerly worked for the Maine Department of Environmental Protection and developed the Maine Green Lodging Certification Program. Meadowmere Resort and Beachmere Inn, both in Ogunquit, have the certificate.

Manomet’s grocery operation is a fee-for-service program. Manomet is funded through grants, donors and foundations. Hannaford became the first chain to have all of its stores certified, followed by Weis Supermarkets, which is based in Sunbury, Pa., and has 200 supermarkets, and Giant Eagle, which is based in Pittsburgh and has 232 supermarkets and 195 convenience stores. Locally, three independent stores in addition to Bow Street have been certified: Rising Tide Community Market in Damariscotta, Royal River Natural Foods in Freeport and Lois’ Natural Marketplace in Scarborough. Whole Foods in Portland also is certified.

Grocers aiming to get Manomet Grocery Stewardship Certification typically pay $1,500 per store. There are some grants to cover the cost. Bow Street’s entire fee was covered by Jane’s Trust in Boston, which has supported up to 20 independent grocers in Maine and New Hampshire.

Cooke works from a checklist of questions typically filled in by the store manager before his arrival. They include how many pull-down shades are in open store refrigerated cases, how much ice is used for product displays and which departments divert food waste or donate food to food banks and other organizations.

There also is a workbook with 400 to 500 points for other things, like whether the refrigerant used to cool the store and its various cases is non-ozone depleting like Bow Street’s use of 40AA and whether there is a refrigeration heat recovery system for hot water to wash dishes and other items in the store.

The certification lasts for three years. The store will then need to recertify, going through the review process again, but needing to up its point total to 130, showing improved sustainability measures, Cooke says.

For all that work, Frey says Bow will get a sticker for its front door and post its certification on Facebook. And that, he says, will help educate consumers about the store’s commitment to sustainability.