Green crabs have invaded, and if you can’t beat ’em, eat ’em 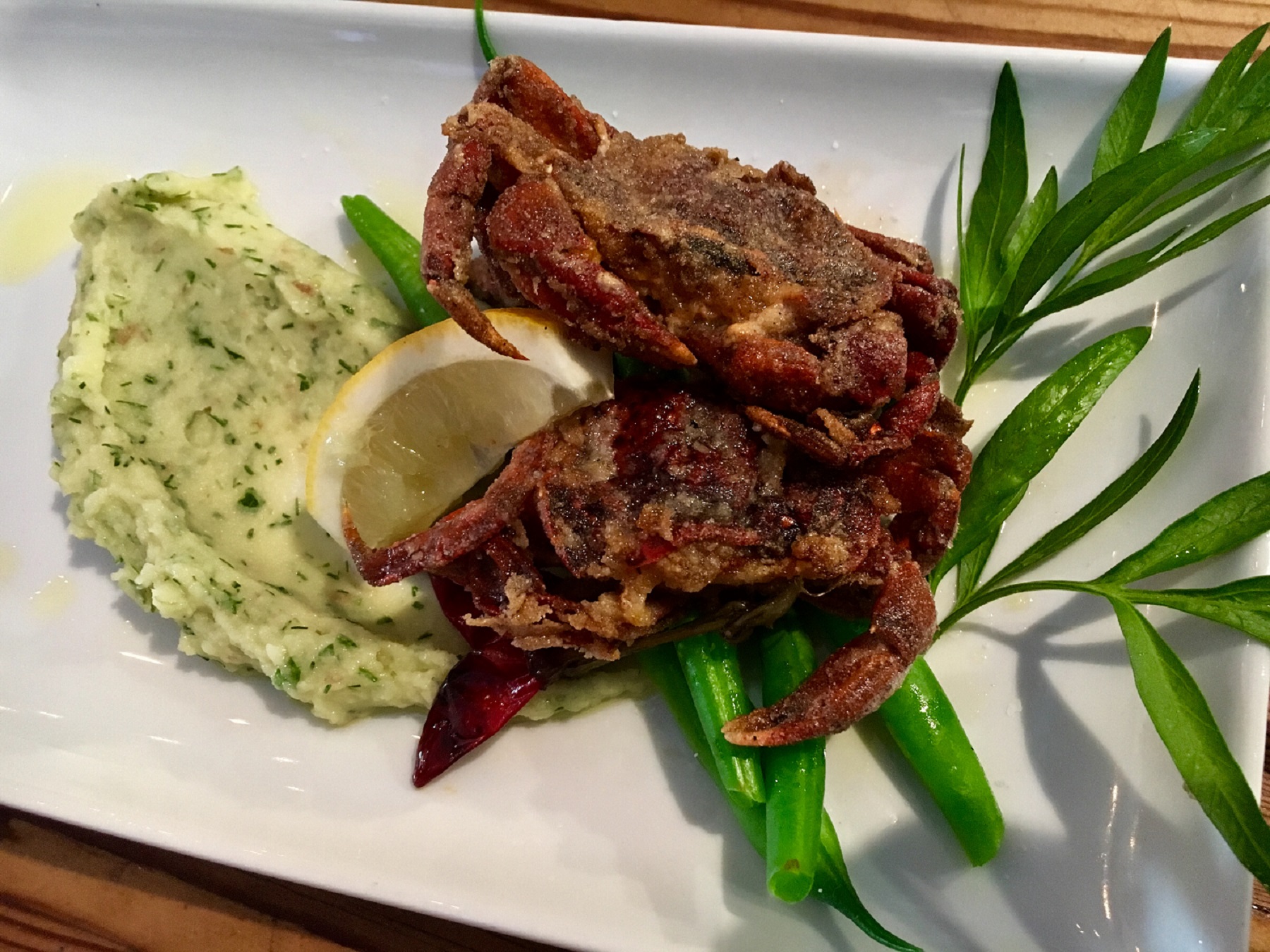 When I started writing about sustainable seafood five years ago, my biggest fear was working on a story that involved a seaworthy vessel in a storm. Under those conditions, my not so seaworthy constitution would be exposed. I’d imagined more heaving of my lunch than honing of my reporting skills.

That assignment has yet to materialize. But my squeamish stomach made an appearance two weeks ago in the face of a locally harvested, deep-fried, soft-shell green crab at Salt Pine Social in Bath. I’d chosen the smallest one on the plate. It was about an inch and a half across its carapace, probably twice that wide if measured from the point of one of its outstretched walking legs to its twin on the far side of the crustacean’s body. It seemed to stare blankly at me as I eyed the fried lemons and parsley on the plate as something I’d rather be eating.

“It’s best to take it all in one bite,” advised Jonathan Taggart, an arts preservationist and green crab enthusiast from Georgetown. What else could I do? I popped it in, pushed aside my textural bias, and found that it was, in fact, very deliciously crabby.

Taggart, who fell in love with Venetian soft-shell crabs called moéche (also moleche) years ago while visiting Italy, is very deep in the weeds of learning how and when local green crabs molt their hard outer shell so that chefs will consider them a financially viable delicacy in their soft-shell state. He is part of growing group of environmentalists, scientists, fishermen, and incubators trying figure out how to mitigate the havoc green crabs are wreaking on Maine’s second most lucrative fishery: soft-shell clams.

Green crabs are an invasive species thriving in warming Gulf of Maine waters. They can consume up to 40 half-inch clams in a day. According to the Department of Marine Resources, last year’s clam landings fell 21 percent, from 9.3 million in 2015 to 7.3 million pounds, the lowest total reported since 1991. I’m not breaking any news here, as this paper’s reporters have been tracking the rise of green crabs for several years, and have highlighted efforts to track them, trap them and turn them into something besides dangerous to the clam industry.

Marissa McMahan, a senior fisheries scientist with Manomet, a regional nonprofit sustainability organization with offices in Brunswick, has conducted rocky intertidal surveys of green crabs and found average abundance as high as 10 crabs per square meter. That’s a lot of crabs, explains McMahon, pointing out that native crabs are found at rates less than one per square meter.

This project, which has proven, at least on a small scale, that these invaders can be trapped, sorted, held until molted and then sold, resulted in four fishermen and women this spring landing about 30 pounds of green crabs per week. Only about 10 percent showed signs of molting; the remainder were held in captivity until they did shed their shells, then sold to restaurateurs for about $45 a pound.

“One very important aspect we want to explore more is what to do with the 90 percent of the crabs that aren’t (at the) pre-molt stage,” said McMahan. Many go to compost now, and while they make good compost, they generate little income in that state. The researchers send some to the University of Maine’s minced crabmeat operation, investigating the viability of products like crab stocks and spreads, which are thought to have broader appeal at an affordable price, and are looking into whether green crab roe (each female can produce 160,000 eggs, after all) could have culinary appeal as well as population control implications.

Both Taggart and McMahan realize that green crabs are not likely to make it into Maine home kitchens with any regularity in the next couple of years. But should you see them in any form on a restaurant menu, give them a try. It takes a village to raise a commercial fishery. And eventually, what chefs do in restaurant kitchens seems to trickle down to home cooks and home kitchens.

Christine Burns Rudalevige is a food writer, a recipe developer and tester and a cooking teacher in Brunswick, and the author of “Green Plate Special,” a new cookbook from Islandport Press based on these columns.

While attending a soft-shell green crab tasting recently, I was chatting with Manomet President John Hagan about his efforts to use nets to keep invasive crabs out of his experimental soft-shelled farmed clam beds. Since it’s hard for home cooks to buy green crabs, I asked him what else we could do to help mitigate their threat to the local clam population. “Eat more clams to support the people who are harvesting what they can,” Hagan said. It sounds counter-intuitive, but soft-shell clams are already part of a state-managed fishery so the local ones you find for sale in fish cases in Maine have been caught according to sustainability standards. Eating them will support local diggers. This recipe helps you do your part, one plate at a time.

Rinse the clams under cold running water to remove sand.

Combine the bacon in a skillet over medium heat with oil. Cook until the bacon renders its fat and the meat gets crispy. Add the garlic and shallots and cook until the shallots become translucent, about 3 minutes. Add the clams, wine, salt and chili flakes). Cover pan and steam on high heat for about 4 minutes or until all the clams open. Remove the clams from the pan once they open, discarding any that do not open. Reduce the liquid in pan by half. Remove the clams from their shells and combine them with the reduced liquid.

Spread a thin layer of mayonnaise on the bread, top with the warm clams in their sauce. Sprinkle with the lemon juice and fresh chives. Eat hot.