After what felt like a slow week, we ended with 62 new birds banded and 73 recaptures processed. This nudges our season totals up to 397 new birds banded and 339 recaptures processed. We banded five new species this week, American Robin, Yellow-bellied Flycatcher, Blackpoll Warbler, Nashville Warbler, and Blue-winged Warbler, increasing our species total for the season up to 35.

On Monday, we caught our first Yellow-bellied Flycatcher in the late afternoon. Another exciting sighting for us was an Eastern Giant Swallowtail fluttering around the flowers in the garden. Although this species had been spotted previously, this was the first time it had been documented with a photo. 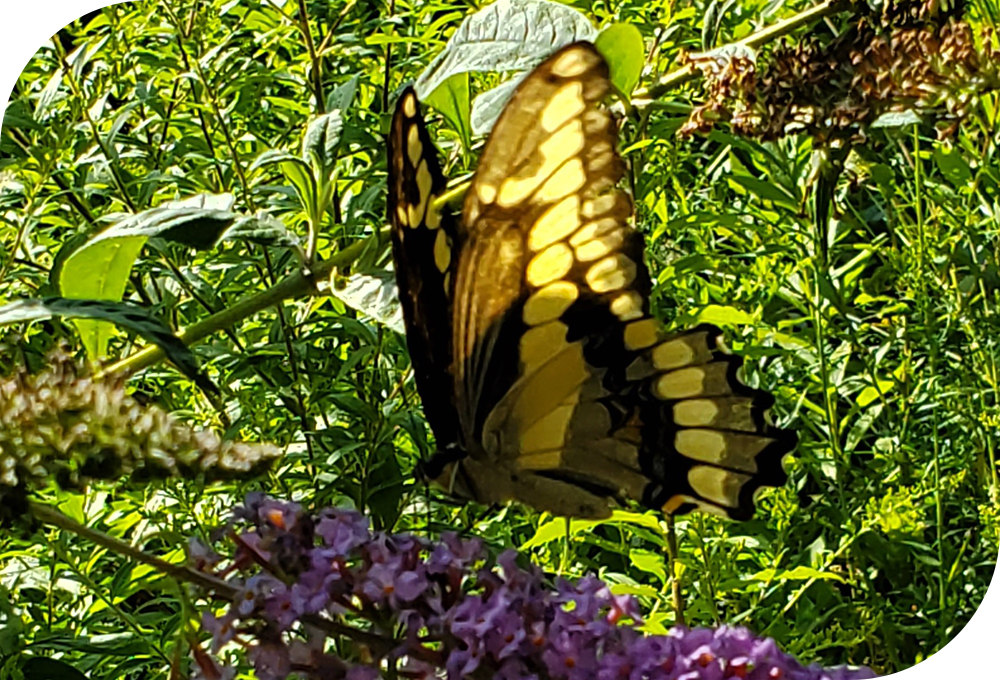 This species is the largest butterfly in North America and is similar in appearance to the Eastern Tiger Swallowtail. Differences in size and coloration distinguish these two species with the Eastern Giant Swallowtail being black with horizontal yellow lines across the forewings while the underneath is mostly yellow with black accents. Weeks ago as we were setting up nets, a few Ghost Pipe plants had begun to bloom. Now there’s an abundance of these ghostly flowers peeking out of the forest floor. Small, white flower heads emerge from the leaf litter in clusters and at times we’ve seen bees hanging upside down to pollinate them.

After our painfully slow day Wednesday, we were excited on Thursday morning when we had more birds in our first net run than we had the entire day before, including two of our new species for the week. Unfortunately, after only a few net runs, we had to close due to approaching rain that soaked things thoroughly. Winds from the northeast on Friday kept our captures low, the wind steadily increased and gusted strongly after our first few net runs making us close exposed nets. Later in the afternoon as the wind calmed down we were able to open more nets and caught a Blue-winged Warbler.