Celebrating Georgia’s coast as a landscape for shorebirds and WHSRN’s 100th site! 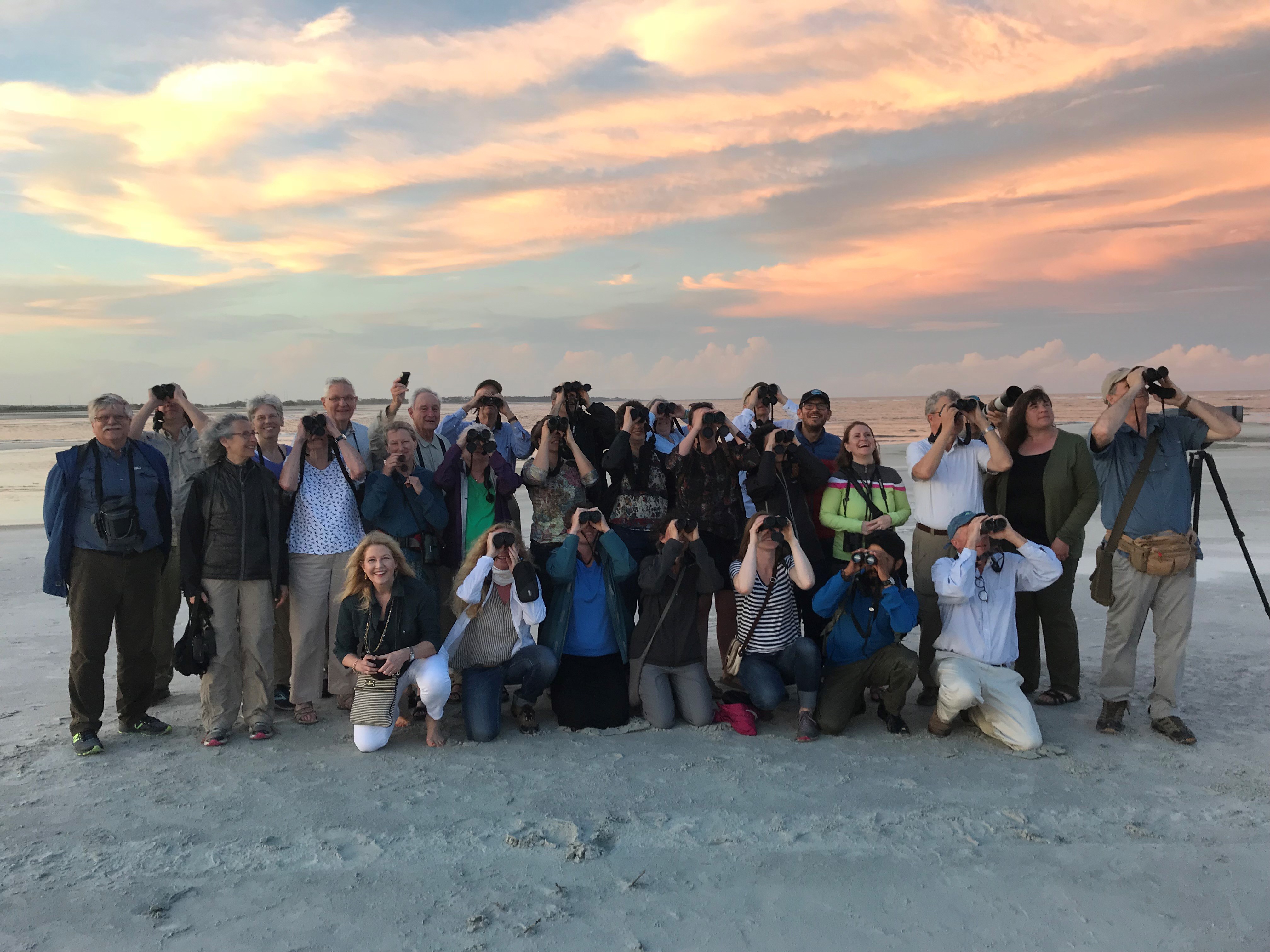 With a backdrop of flags representing 17 countries from across North and South America, 150 people gathered at Harris Neck National Wildlife Refuge in Townsend, GA, to celebrate the designation of Georgia’s coast as a landscape of hemispheric importance for shorebirds. Each flag represented a country recognized by the Western Hemisphere Shorebird Reserve Network (WHSRN) as a critical site for the survival of threatened shorebirds.

The designation of Georgia’s barrier islands marked WHSRN’s 100th site, a prestigious award that brought in visitors from as far north as Alaska and as far south as Paraguay. Attendees at the event included Manomet and WHSRN staff, Manomet Trustees and Councilors, local birders and bird organizations like the Georgia Shorebird Alliance and partners One Hundred Miles and the Commission for Environmental Cooperation.

As the skies opened up and the rain began to fall, Kimberly Hayes, manager of the Harris Neck National Wildlife Refuge welcomed all guests. Speakers included Megan Desrosiers, CEO of One Hundred Miles; Dr. Rob Clay, Director of the WHSRN Executive Office; Brad Winn, Director of Shorebird Habitat Management at Manomet and former program manager for the Coastal Nongame Conservation Section of the Georgia Department of Natural Resources. On the program to address the international connectivity of WHSRN sites were Kerry Lee Morris-Cormier with Nature Conservancy Canada working in the Bay of Fundy and César Guerrero Ávila, Executive Director, Terra Peninsular working to protect the Baja California peninsula.

Peter Stangel, Chief Operating Officer with the U.S. Endowment for Forests and Communities, inspired guests with a keynote address on the importance of partnerships and individual action for the protection of threatened species. “The need for expanding and strengthening WHSRN is greater than ever. Many shorebird species continue to decline, our coasts and wetlands face challenges as never before from extreme weather and sea-level rise, and human use of coastlines grows constantly,” Stangel observed. He then urged the crowd, “We need the next 100 WHSRN sites in a fraction of the 30 years it took to get the first 100. To do this, we need to mobilize our base—birders—but we also have to make sure these shorebird reserves have a broader connection in our society.”

“This is really what WHSRN is about—it’s about trying to save those special places for shorebirds, and building the connections between the local communities at those sites,” added Rob Clay, Director of WHSRN’s Executive Office.

The new WHSRN landscape holds a variety of habitats of importance to shorebirds, including island beaches and dunes, offshore sand bars, and extensive sand and mud flats exposed at low tides. One of the more remarkable attributes of the landscape is the number of natural inlets with no engineered channels. All of the inland sides of the barrier islands include extensive salt marsh, which provides critical foraging habitat for shorebirds throughout the year.

The Georgia Barrier Islands WHSRN Landscape was designated due to its supporting more than 30% of the population of both rufa Red Knot and the Great Lakes breeding population of Piping Plover. Other notable birds that are currently visiting our Georgia coast include the American Oystercatcher, Black-bellied Plover, and Whimbrel. “For shorebirds dependent on the U.S. Atlantic Coast, Georgia supports a complex mosaic of important habitat that provides food and resting places 12 months of each year,” says Manomet’s Brad Winn. “Free-flowing rivers and inlets allowed to move with the seasons are rare in any state, and Georgians should work hard to protect the quality and quantity of its water and natural beach landscapes.”

The celebration extended before and after the dedication ceremony. WHSRN and Manomet delegations joined One Hundred Miles and local guides for a rainy boat trip into the Altamaha River Delta to witness a shorebird feeding frenzy on the eggs of spawning horseshoe crabs. Such robust annual spawning events are a major reason why shorebirds, such as the Red Knots, Dunlin, Ruddy Turnstones and Dowitcher, depend on Georgia’s barrier islands as a refueling stop for their continued migration to the Arctic for nesting.

Using his years of experience birding in Georgia, Brad Winn (drawing on his past work in Georgia) brought attendees to watch the evening flight of Whimbrels coming in to roost at Gould’s Inlet, St. Simons Island—one of the largest spring gatherings of Whimbrel in North America. Other highlights of the trip included a day trip to Little St. Simons Island, a tour of the Georgia Sea Turtle Center, and birding around Jekyll Island.

“The connections between humans and nature are clear,” said Megan Desrosiers of One Hundred Miles. “What’s good for the shorebird is good for us, too. It is time that we celebrate and embrace the connections that tie us to each other and our surroundings. Only then will we work to preserve them.”

During the events surrounding the WHSRN dedication ceremony, Manomet also officially launched the Georgia Bight Shorebird Conservation Initiative. This project seeks to unite state, federal and local partners to collaborate for more effective shorebird conservation along the Georgia, South Carolina and northern Florida coast. The initiative is being led by Manomet’s Brad Winn, and includes supporting an on-site shorebird biologist, Abby Sterling. By working with stakeholders involved in shorebird conservation, identifying research and management objectives, and building education and outreach efforts, Manomet will harness the momentum generated through the WHSRN designation to achieve measurable, on-the-ground progress for shorebirds in the Southeast.