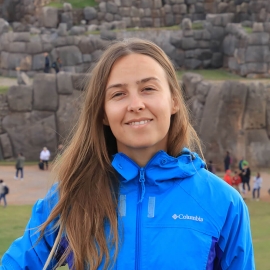 Marcela is native to Córdoba, Argentina, where she lives in Miramar de Ansenuza, a small town on the shore of Mar Chiquita Lake, one of the very first WHSRN sites (designated in 1989). She joined the WHSRN Executive Office team in 2019 as a Flyway Conservation Specialist, focused on the conservation of saline lakes. Among her activities, Marcela is working on an update of the Wilson’s Phalarope conservation plan and developing a protocol for boreal winter/austral summer surveys for the species. She is also working to strengthen the connections between communities and conservation efforts at inland salt lakes, with a primary focus on existing WHSRN sites. From 2014 until recently, Marcela was one of the two site representatives for Mar Chiquita Lake to the Argentine WHSRN Council.

Marcela has a degree in Biology from the National University of Córdoba (UNC), where she is currently undertaking PhD studies on the non-breeding ecology of Wilson’s Phalarope in central Argentina. Her odyssey with phalaropes began in 2012 at Great Salt Lake (Utah), where she spent the summer working on breeding ecology and habitat use as part of the Linking Communities initiative, sponsored by the U.S Fish & Wildlife Service, Rio Tinto, Weber State University and BirdLife International. In 2013 she received a scholarship from National Audubon Society and the Weber State University to continue her work with the species at Great Salt Lake.

In recent years Marcela has been involved in many education and outreach activities in central Argentina, with the goal of involving her community in conservation activities and raising awareness of the importance of WHSRN sites for biodiversity preservation.